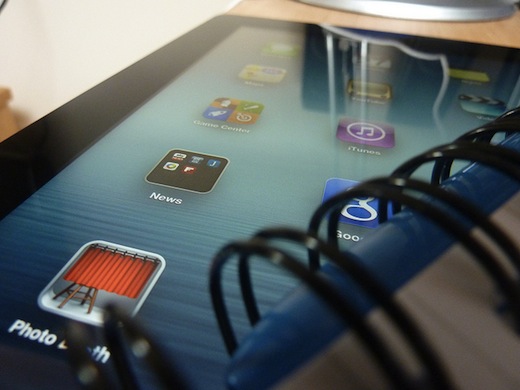 We’ve told you what the best Mac apps and Android apps launched in 2012 are.

At the end of last year, we even provided you with a handy list of which apps to install on your new iPad, and recently which apps should be in your iPhoneography ‘camera bag’. Basically, you’ve been rather spoiled. You’re welcome.

But we know you’ve been desperately longing for a post listing the best iPad apps released this year, so far, and no longer would we dare test your patience:

We’re looking forward to Sparrow for iPad, which is on its way.

Not to mention Path, which says it will debut its iPad app later this year.

We’re even anxious to put our paws on Google’s tablet-optimized social networking app; Google+ for iPad is coming. But that’s not why you’re here.

Apple launched some apps for the iPad. Yup.

Heck, even The Next Web released an iPad app – and an iPad magazine!

But we also finally have Chrome for iOS (our hands-on) as well as Google Drive for iOS, as announced at Google’s I/O event this week.

➤ Sure, you could search for the new LinkedIn app on the App Store, but why bother when your friends from The Next Web give you a handy download link?

➤ You may rock to the tablet beat after grabbing the app.

➤ Start flinging those cute birdies after downloading the app.

If you hate reading and would rather spend your days turning photos into 3D models, check out Autodesk’s 123D Catch application for the iPad.

Lots of justified praise for the ex-Microsoft Courier team’s drawing app Paper, which is very popular, and very cool.

➤ Get it here and create something magical, mkay?

➤ Grab it here and be amazed.

If you want to tweet from your iPad, consider Tweetbot. Because it’s awesome.

The universe is wonderful and so is Brian Cox’s Wonders of the Universe app.

➤ Wanna brag about your iPad to your friends? Grab Wonders of the Universe.

Digital storytelling from the iPad was never easier thanks to Storify’s app.

Digital reading was also never easier thanks to iPad apps like Readability.

➤ Go forth and downloadeth Readbility for iPad

We called Beatsurfing, if a bit niche, one of the coolest music iPad apps, ever.

➤ You don’t have to take our word for it, just install it yourself.

We asserted that Slidewriter’s iPad app may actually change the way you type.

➤ Download Slidewriter if that’s the kind of change you’re looking for.

➤ Are you still here? Get the app and book away!

Waiting for Microsoft Office to hit the iPad? Check out CloudOn while you wait.

➤ Increase your tablet productivity with CloudOn for iPad

Iris delivers the beautiful Instagram experience that the iPad deserves, we said.

➤ Treat yourself to TumbleOn for iPad

If you’re into data compression (and don’t lie to us, we know you), then you should definitely be aware that Onavo hit the iPad.

It’s not a full on double rainbow across the sky, but you should still check out Reading Rainbow’s iPad app.

Note-takers everywhere, listen up! Dunno will alter your behavior.

➤ Get Dunno while it’s still hot.

Tweek is a cool social TV discovery app for the iPad

Run away from the temple. Be brave. Download Temple Run: Brave.

➤ You can get it at the App Store.

The sun shines on Minimeteo, a slick and minimal weather app for the iPad.

“Spell Tower is like Tetris meets wordsearch for the iPad”

➤ What else is there to add? Grab it here.

Mix and mashup music videos on your iPad with Vjay.

➤ Get Brekkie for the iPad

Digital newsstands aplenty, but do check out PressReader for iPad

➤ You can get it from the App Store here

Like Hacker News? We have not one but two iPad apps for you.

➤ Check out news.yc and Hacker News for iOS

Other great iPad apps we didn’t write about … yet

The Verge: MOG for iPad quietly makes its debut (download)