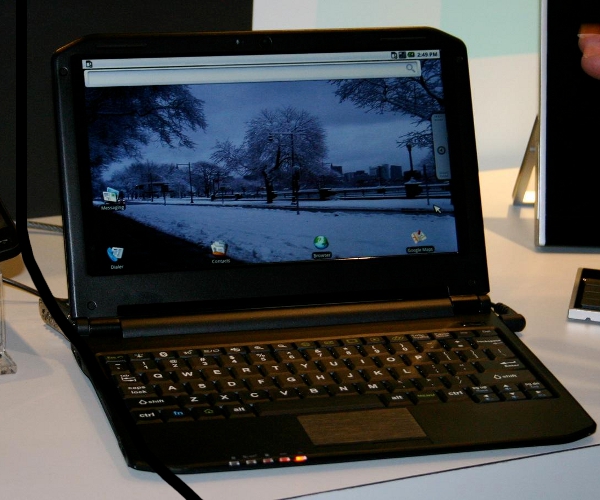 A week ago at the Web 2.0 Summit, Google CEO Eric Schmidt made the clearest statement yet about the difference between Android and Chrome OS: Android is for touch and Chrome OS is for keyboards. He also made it pretty clear that Chrome OS will not be available in 2010 – but then again, maybe it will. But regardless of when/if we actually see it, all of this is really good to know, because it makes it much easier to say this:

While some people might be interested to play with it, nobody needs Chrome OS at this point – it would be dead-on-arrival.

It should be pretty apparent by now that hardware manufacturers are in no way thrilled by the prospect of Chrome OS. They keep deflecting questions not only about when they will offer netbooks/laptops with Chrome OS, but also about whether they will ever do so. There is a pretty good reason why too: Windows 7 is selling like hotcakes.

When Google announced the ‘idea’ of Chrome OS in July 2009, everyone went gaga, and put in the context of 18 months ago, it’s not that hard to see why we all did: there was no Windows 7 or iPad, Android was frankly just terrible and Chrome (the browser not OS) was not nearly where it is today. People might not have exactly known it at the time, but they were dying for a bigger iPhone (Steve Jobs certainly knew) and the promise of Chrome OS just seemed to be a way to get there. We didn’t understand how far Android would come so quickly, and the iPad was just a dream.

Beyond that, at the time, netbooks were selling like crazy, and everyone was high on ‘the cloud’ (in many ways we still are), so beyond Ubuntu, which never caught on with the public – though it is a super OS – there was a need for something new in ultraportables, and Chrome OS at the time was seemingly as good a shot as anything.

However, the technology landscape is vastly different now than it was 18 months ago because of the three reasons listed above. First there was Windows 7, which frankly is sufficiently good enough for anyone with a netbook, and it is almost universally pre-installed in netbooks now, and we just don’t see how Chrome OS will displace it from that spot. Then there is the iPad, which, with the addition of iOS 4.2 today becomes even more of a netbook killer. Then of course there is Android and the Chrome browser.

Plain and simple, the existence of Android also with the rapidly iterating Chrome browser are the most compelling reasons to believe that we do not need Chrome OS. Chrome the browser is rapidly gaining not only adoption but functionality, and since it is cross-platform, it really has the best chance to accomplish what Google really wants to do, and that is have complete lock-in to your Internet experience (witness Google TV). While Android might “be for touch” as the iPad has demonstrated, if you don’t want to type on a tablet, you just get a bluetooth keyboard, and you’re ready to go. Assuming that Android 3.0 is even half of what it is being cracked up to be, Google will have a mature-enough-tablet-OS that will quickly have plenty of apps.

Granted, Apple splits its software development focus between OSX and iOS, but as we’ve seen with the MacBook Air, even Apple is trying to converge and bring more touch to OSX. There are two major differences between Apple and Google, however, on this front. First, Apple has been producing desktop software (i.e. for keyboards) for around 30 years, so it’s not like Apple is saying, “Great, iOS is doing great, now let’s build a keyboard-based OS” – which is exactly what Google is doing.

Second – an possibly more importantly – Apple builds hardware, something Google has stated numerous times that it has no plans to do (which of course is the right strategy). So Apple produces an OS for its popular Mac line, which makes perfect sense. However, Google is apparently building an OS that doesn’t have a hardware use (at least not officially announced).

So this really begs the question: is Google actually still building Chrome OS for a consumer market, and if so why? Google has shown a penchant – even to extent of making it a point of pride – that it is willing to drop major initiatives when they reach the ‘fail’ stage, as evidenced by Google Wave. Here’s our prediction: Google has already basically given up on Chrome OS – at least as a consumer product, though we could see a scenario where it offers it as an enterprise version that is bundled for Google Apps customers, especially as Google is apparently still hiring for the Chrome OS team – and is stalling until it can roll out Android 3.0, at which time it will officially send Chrome OS the way of Wave (at least in the consumer realm). Both products were good thoughts at the time, but on was too early and the other it’s turning out, is too late to the game.