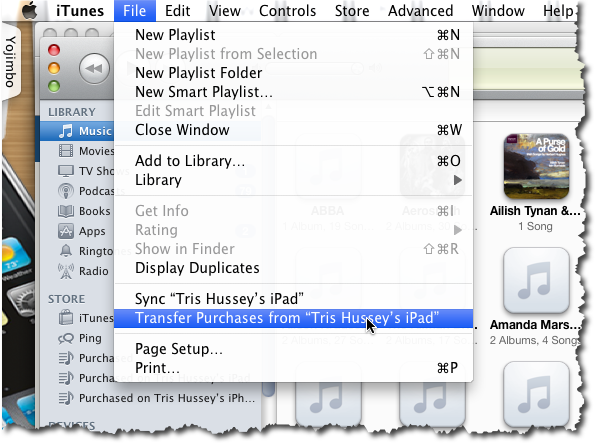 As iOS 4.2 is trickling through the Interwebs (direct download links at the bottom of this post), iPad owners are dancing with glee because we can now use multitasking, app folders, and Game Center. I’ve running iOS 4.2 (Gold Master x2) for almost a week, so here is “what you need to know about iOS 4.2”:

Maybe this should be obvious, but before you load the new OS, backup and sync your iPad. Also don’t forget to double-check that your purchases are transfered:

It will take a while.

If you only have 15 minutes before you need to dash out the door, this isn’t the time to update to 4.2. Be prepared for the package to download (it’s several hundred megs), install, and your iPad to reset itself. When I did the update it took me over an hour (I did have to restore my iPad because of the way I installed iOS 4.2), this won’t be typical for most users I’m sure, but still, give yourself time.

The iPad finally has app folders like iPhones running iOS 4.x have had for a while. You organize the apps just like you’ve been moving them around, except if you drag and drop an app onto another app a folder will be created. Apple guesses at the name based on the categories the apps are under in the App Store. For a new folder you can edit the name first thing. Once you have a few folders, you can just drop apps into them. Unlike the iPhone’s paltry 12 apps per folder, on the iPad you can stash 20 apps in each folder:

Oh yes, you can run more than just the iPod app in the background now—if the app has been updated to support it. Look for updates to your favourite apps soon—if they haven’t been updated already.

Yep, Game Center is on the iPad now. Check out the App Store on your iPad to see if any developers have updated their apps to include Game Center support.

The change will most likely bring a sense of familiarity to new iPad users who have previously owned or used an iPhone, iPad owners suddenly worried about where the orientation lock now resides can head to the multitasking bar and then swipe the screen to the left.

Printing comes to the iPad.

All Apple device owners upgrading to iOS 4.2 will be able to make use of AirPrint, a new feature that will allow iPad, iPhone and iPod Touch users to print directly from their devices.

Enabled within photos, Safari and pretty much any app that supports it, AirPrint can output media to printers shared on your network, as long as it isn’t a TCP/IP device. Currently, only a handful of HP printers are able to support the standards required by AirPrint but at least the thought is there.

View video, music and movies wirelessly around your house.

Similar in the way that AirPrint sends photos or documents to your printer, AirPlay allows you to view or listen to media on any device that is AirPlay-compatible on your network. The service uses a new streaming technology that will send media on the iPad to any device connected to one of Apple’s Airport devices, especially the Apple TV.

If you haven’t been able to download the update, you’ll find direct download links here via Mac Stories: