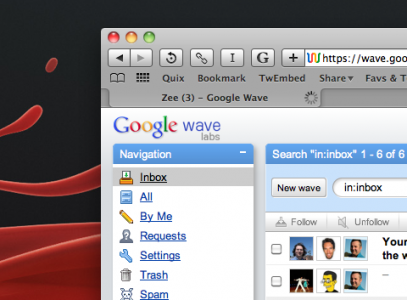 Google Wave will no longer receive the support of Google.

Today on the Google blog, the following statement pretty much sums up why Wave will no longer be one of Google’s supported product offerings:

“ Wave has not seen the user adoption we would have liked. We don’t plan to continue developing Wave as a standalone product, but we will maintain the site at least through the end of the year and extend the technology for use in other Google projects. The central parts of the code, as well as the protocols that have driven many of Wave’s innovations, like drag-and-drop and character-by-character live typing, are already available as open source, so customers and partners can continue the innovation we began. In addition, we will work on tools so that users can easily “liberate” their content from Wave.”

Wave, launched in May 2009, was supposed to revolutionize communication as “a web app for real time communication and collaboration, it set a high bar for what was possible in a web browser.”  It did anything but with few users allowed to use the service initially, and ultimately just as few using the service when it went live to all earlier this year.

So long Wave.  It was nice knowing you and not using you.

Read next: Throwing a Keyboard can't be that hard, can it?