This article was published on December 28, 2015

It hasn’t been a big year for hyped-up startups, but these 12 names managed to make an impact.

Let’s not get caught up in whether each of these are true startups, growth-stage companies or unicorns (there’s a bit of all three in the list). The point is that these are new names to the masses and managed to cut through and have big years. They’re also names to watch in 2016…

Growing roughly in line with the increase in use of GIFs in online communication, Giphy   has become the go-to place to search for the perfect animation to make your point.

Although its Slack and Facebook Messenger integrations are particularly notable, the company has rolled out tools to make it easy to create your own GIFs – the Giphy Cam mobile app, and a Web-based GIF Maker.

Having raised a $21,550,000 Series-B round in January, and with 60 million unique visitors a month to its website and over 2 billion monthly API calls as of July this year, don’t just think of it as a faddy app startup. Giphy sees itself as a media company leading the charge of GIF-based communication. 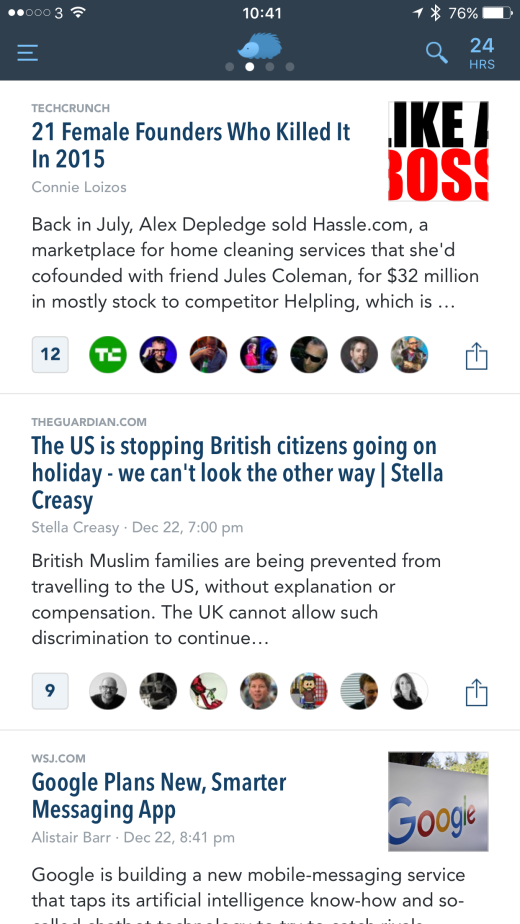 At first glance, Nuzzel   really isn’t doing that much new. It looks at the links your friends are sharing on Twitter and Facebook, and tells you about the most popular ones. So far, so unremarkable, but Nuzzel has developed a reputation for being really good at its job.

This year it expanded its offering with newsletters and an Android app. It also became one of the first places you could see links to pages supporting Google’s new Accelerated Mobile Pages framework.

The company, founded by Jonathan Abrams who previously launched early social network Friendster, raised $1.7 million this year. That’s not only its third round but the third time it raised that exact amount, too.

As these things tend to go, an acquisition by one of the consumer tech giants seems likely in the reasonably near future. Highly vocal Twitter investor Chris Sacca suggested this year that Nuzzel would be a great ‘Twitter News’ app, for example.

Let’s not get caught up over whether, having raised $340 million, Slack   is truly a startup or not. At only two years old, the company has broken through as the perfect example of word-of-mouth success. Having amassed 2 million daily active users through the pure vitality of its workplace collaboration software, the company only recently rolled out its first ad campaign.

In a busy market, Slack stands out with its combination of its ease of use and fun that perfectly suits the ‘bring your own device’ trend and sense of individuality that can encourage among workers. The fact that people are using it for all sorts of non-work groups helps show why employees at companies around the world have taken to Slack in droves.

As the year came to a close, Slack boosted its credentials as a true platform with the launch of an $80 million fund in collaboration with venture capitalists, to invest in companies that build on top of the core service.

At a time when the pros and cons of secure online communication are being debated more than ever, Telegram   managed to highlight both sides of the argument.

On one hand, its high-profile emphasis on privacy and encryption helped it attain a 12x increase in the number messages it handled per day in just eight months, up to 12 billion per day. And when Facebook’s own encrypted chat service, WhatsApp, was blocked in Brazil for a day Telegram says it gained 1 million new users.

On the other hand, Telegram faced notoriety after it was revealed to be a popular hangout for ISIS members and sympathizers. The company fought back, closing 78 channels in a week.

In other bad news for the company, the very encryption it’s built its name upon was criticized by security experts, it fought a DDoS attack and its security on Android was questioned.

In all though, rapid growth and a focus on features for teams should see Telegram enter 2016 on an upward trajectory. Can it rescue its reputation when it comes to security, though? Rival app Signal is busy making waves as an alternative.

Springing out of nowhere in February, Meerkat   was the app that made mobile live video streaming cool again. Quickly adopted by Silicon Valley, it was set up to be the talking point of SXSW in March… and then Twitter stepped in, cutting off access to its user graph. This meant that users could no longer have an instant connection with other users after signing up.

The drama was a real talking point at SXSW, especially as it took place around the same time it emerged that Twitter had acquired stealth-mode Meerkat rival Periscope in late 2014 and was gearing up for a launch in the subsequent weeks.

While the launch of Periscope took some of the wind out of Meerkat’s sails, the startup continued to develop the app, adding Facebook integration and other features, and engaging in partnerships with the likes of Madonna and Discovery’s Shark Week.

Meerkat has raised a total of $16.2 million, but the big question is whether it can recapture the magic of early 2015 next year.

Companies that make HR dashboards don’t tend to end up on ‘hot startups’ lists, but Zenefits   seemed unstoppable for much of the year. It achieved a $4.5 billion valuation in May amid a meteoric rise as a prominent US unicorn.

The company has been growing fast. Unlike its rivals, it gives away its software to businesses, generating revenue only if those businesses choose Zenefits as their insurance broker.

It’s an approach that upset payroll giant ADP, leading to a very public legal spat between the two companies that was eventually settled. The company wasn’t out of the woods though; it was reported last month that Zenefits had flouted the law by allowing unlicensed brokers to sell health insurance, while it also faces potentially costly claims it didn’t pay employees correctly.

Still, as Uber has shown, you can’t disrupt an industry without suffering a little disruption yourself.

Although Product Hunt became to prominent name in 2014, 2015 was the year in which it became a key part of many tech companies’ marketing plans.

Whereas the launch publicity for an app used to center around getting key reviews in the tech press, a well-timed posting on Product Hunt has now become a popular approach. It’s common for us to be asked by developers if we’ll time publication of our review to tie in with a Product Hunt posting.

As a product itself, the service has expanded to cover books, podcasts and games. All is not totally rosy though; some have called into question the hidden power of certain key users in helping a listing achieve success on the site.

Cultivating a sustainable, transparently-managed and balanced community will be more important than ever in 2016 if Product Hunt is to maintain its position of influence. The company’s CEO Ryan Hoover described this as “a difficult challenge but 100 percent solvable” in a recent Medium post

Having raised a total of $138,010,000, Postmates   is hardly a ‘startup’ in the traditional sense. But 2015 saw the three-year-old speedy delivery company start to make an impact on mainstream America. It expanded to serve 40 cities across the USA, and plans a UK launch next year.

Although it’s most closely associated with delivering food from local stores and restaurants, this year Postmates announced some key partnerships with big names. It started delivering Starbucks, Apple and Chipotle orders in certain markets. It also began experimenting with 15-minute deliveries of lunches in parts of San Francisco,

2016 will be a key year for Postmates as the one-hour delivery market begins to mature in major US markets. Although eBay pulled out of the space in 2015, Uber is ramping up its efforts. Postmates predicts it will be profitable in 2016, too.

Deliveroo   is in a similar space to Postmates, but focused specifically on getting restaurant food to your home. One of the most talked-about startups in Europe, it raised an enormous $195 million over three rounds this year.

With its branded motorbikes already a familiar sight in a number of cities across Europe, the London-based startup expanded into Asia and Australia in November.

In a world where specialists in coding and hardware development are in greater demand than ever, getting kids interested in being more than just consumers of tech is important. Kano   is capitalizing on that with a computer and coding kit for children aged 6+.

It’s essentially ‘the Lego of computing,’ allowing kids to assemble a working, Raspberry Pi-based computer and then learn the basics of coding with it. The company raised a $15 million Series A round in May this year, and expanded its product line with a DIY screen kit and an open-source operating system for the new $5 Raspberry Pi Zero. 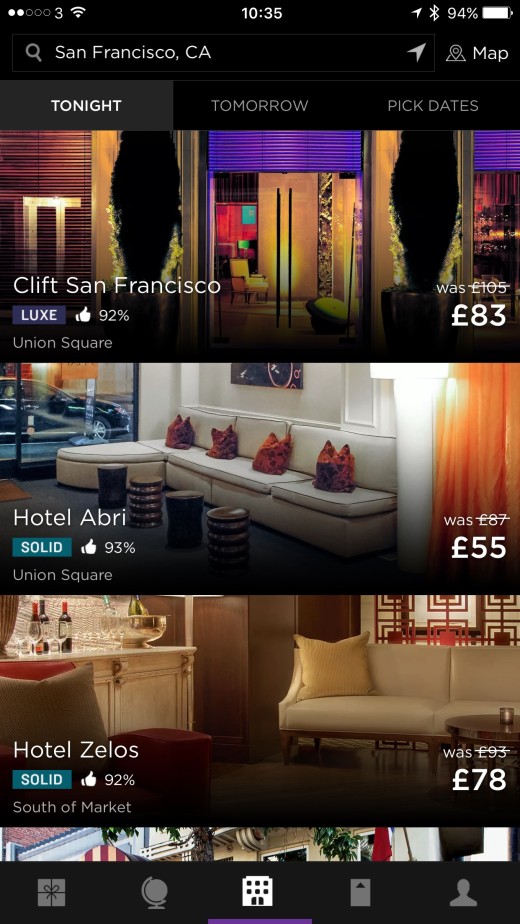 HotelTonight   is one of the quickest and easiest ways of booking a hotel, and this year the company found more ways to be an invaluable companion for travellers around the globe.

There was the addition of an ‘Escapes’ feature for booking city breaks, news of a personal concierge feature, support for Concur‘s business expense-tracking software, and rate tracking for keeping an eye on price changes when you’re considering a booking.

However, 2015 wasn’t all rosy for HotelTonight. The company trimmed 37 staff, 20 percent of its workforce, in what it described as a move to ‘streamline’ its business.

While it offers an undeniably slick app, HotelTonight faces competition in the easy-hotel-booking market from the likes of Google and TripAdvisor’s Instant Booking.

London-based TransferWise   has been around since 2010, gradually expanding its clever, low-cost money transfer service. In 2015 though, it made noise thanks to its US launch and a $58 million funding round at a $1 billion valuation. In 2016, the company will continue to expand its global footprint.

TransferWise broke into mainstream consciousness this year thanks to a high-profile poster campaign in cities like New York and London that aggressively positions itself against money transfer incumbents like Western Union. The company also faces competition from Ireland-based rival CurrencyFair.