When Microsoft announced the Surface Pro shortly after revealing the Surface Laptop, I couldn’t help but feel the tiniest twinge of disappointment.

Microsoft’s new laptop had mainstream appeal, but it abandoned the shape-shifting nature that defined every Surface before it. Meanwhile the Surface Pro – the heart and soul of the brand – just received a light spec bump and cosmetic touch-up.

Well, it turns out those small refinements – mainly, battery life – make all the difference. The new Surface Pro has some significant drawbacks, but it’s still one of the best portable computers you can buy – laptop or tablet notwithstanding.

There isn’t much to say about the Surface Pro’s exterior. If you’ve read our thoughts on the Pro 4 and Pro 3, you know most of the story. It’s a sleek, sturdy device and the changes to the chassis amount to slightly rounder edges and an improved kickstand, which now can sit flatter for more comfortable sketching. 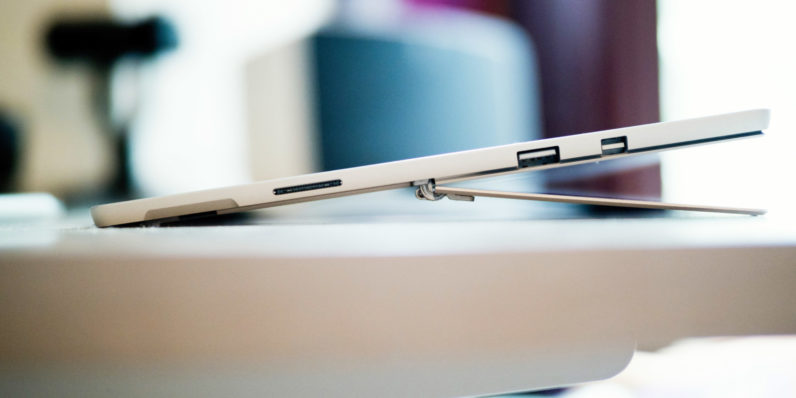 The new Type covers are the biggest visual change, thanks to their use of that fancy Alcantara fabric, which is sturdier and prettier than the old felt-like material. It’s the same material Microsoft is using in its Surface Laptop, and which comes in gorgeous burgundy and cobalt blue colors. It also feels great on the wrists.

The typing experience itself is nearly identical to the Surface Pro 4 (read: great), though the keys are a tiny bit quieter, and the trackpad is slightly more responsive. It’s frankly better than keyboard and trackpad on most proper Windows laptops (not to mention the new MacBooks, fight me).

Still, if you’re coming from a Pro 4, there’s no need to upgrade. There’s just one real perk: There are finally brightness controls right on the keyboard. Thank you, tech gods. 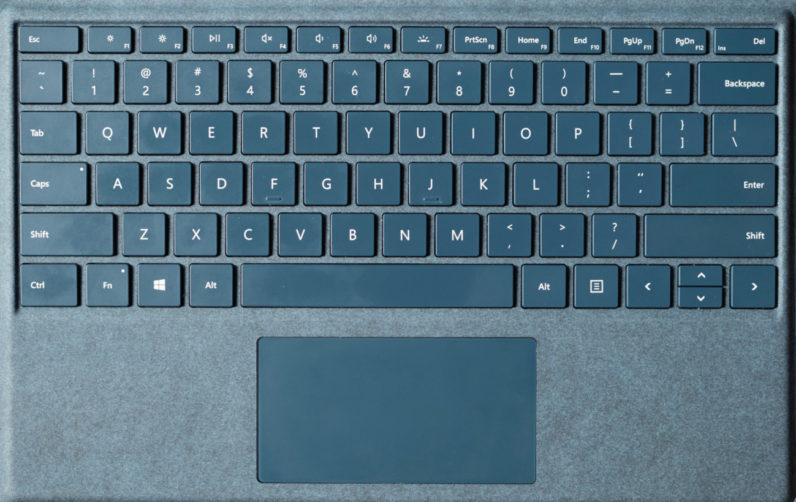 Speaking of brightness, the display gets a little bit brighter, but more importantly, automatic brightness seems to be more judicious; while I often found myself cranking up the brightness on the Surface Book and Pro 4, I generally was happy using the ‘suggested’ setting on the new Pro. Continuing with the mild improvement theme, the speakers are slightly louder and fuller, too.

Unfortunately, Microsoft didn’t see fit to improve the I/O – mainly, including a Thunderbolt 3 or even plain-old USB-C port. I’ve already written about how the omission is hurting the Surface brand. But at least Microsoft says it’s planning on creating a USB-C dongle that connects through the charging port, so yay, I guess?

Microsoft has a new Surface Pen. The good news: it’s really quite nice. When writing on the new Pro, Microsoft says it’s cut down the latency to just 21 milliseconds – half of its previous figure. Using it in OneNote feels remarkably like writing on paper – the improvement is immediate and obvious. It’s also tilt sensitive, which should give artists a fair bit more flexibility to work with.

Unfortunately, not every app is optimized for the increased speed. While most UWP apps seemed fine, drawings still lagged a bit behind my movements in Photoshop, so hopefully Microsoft is working closely with developers to improve responsiveness all around.

Side note: the initial pairing process is really nifty. You just hold the pen to the screen for 10 seconds and it pairs automatically. Sweet.

And now the bad news: the Surface Pen is no longer included with the device, instead costing $99 extra with no price reduction to the tablet itself. That’s disappointing, considering all the effort Microsoft has spent trying to make the stylus be a thing again. Having it bundled in the package meant people may give it a shot and become hooked, but now I suspect it’ll mostly be artists and long-time stylus aficionados who care to buy one. I’d rather Microsoft had just bundled a cheaper pen and sold the new one as a premium option instead.

Intel’s Kaby Lake chips aren’t going to provide a massive upgrade over the Skylake silicone in the Pro 4, but the small benefits add up.

On the Core i7 model I tested, performance was smooth throughout.  It was noticeably faster, while the Iris graphics were decent enough to play competitive (as in, not graphically intensive) games like CS:GO at medium settings at 60+ fps. The i5 model should perform just as well for most everyday tasks, but will suffer in gaming due to the lack of Iris graphics.

Impressively, the fan almost never flares up, and when it does, it’s super quiet (the i5 and m3 models don’t even have a fan). The device never noticeably throttled under heavy load either, which was often the bane of past devices. 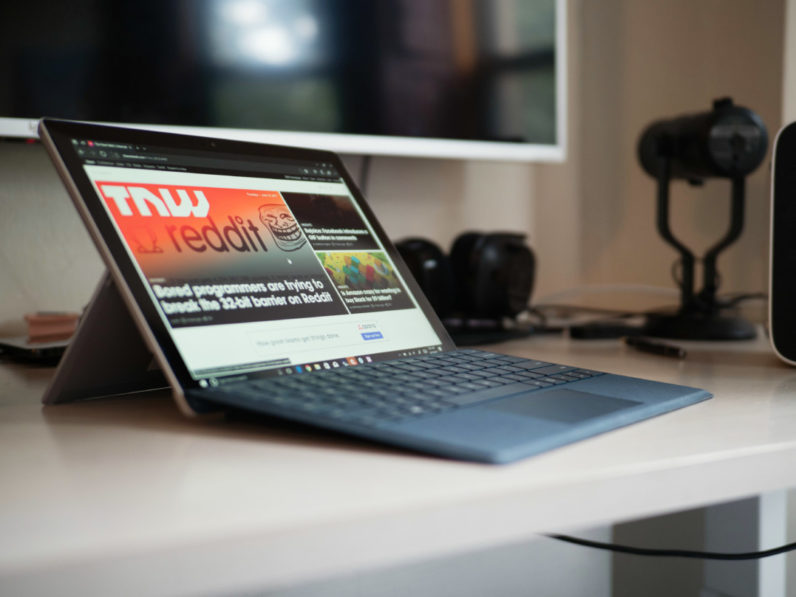 That Kaby Lake chip also has one small very practical advantage: built in DRM hardware means you can watch Netflix (and other copyright-protected content) in glorious 4K. Even if the screen’s resolution isn’t quite full 4K, the quality improvement is palpable.

But by far the biggest improvement to the new Surface Pro is its battery life. It finally feels like I can usually leave my charger at home without caring too much. For a tablet that’s presumably supposed to be more portable than a laptop, that’s a big deal.

As you probably already know, you’re not going to get Microsoft’s claimed 13.5 hours of battery . Those tests are done looping video on repeat, and nobody watches video that way for that long. But for lots of web browsing, image editing, note-taking and the occasional video or two, the battery should be able to get you through a workday just fine.

With my typical moderate-to-heavy usage, I regularly managed about six to eight hours of Getting Work Done. Compare that to the Surface Pro 4, which would normally conk out around four hours for me. Even with heavier loads, I struggled to get the Surface Pro to last less than five hours (the Pro 4 would sometimes die at around three). I also pleased to finds I didn’t run into any issues with standby drainage that affected previous Pros. 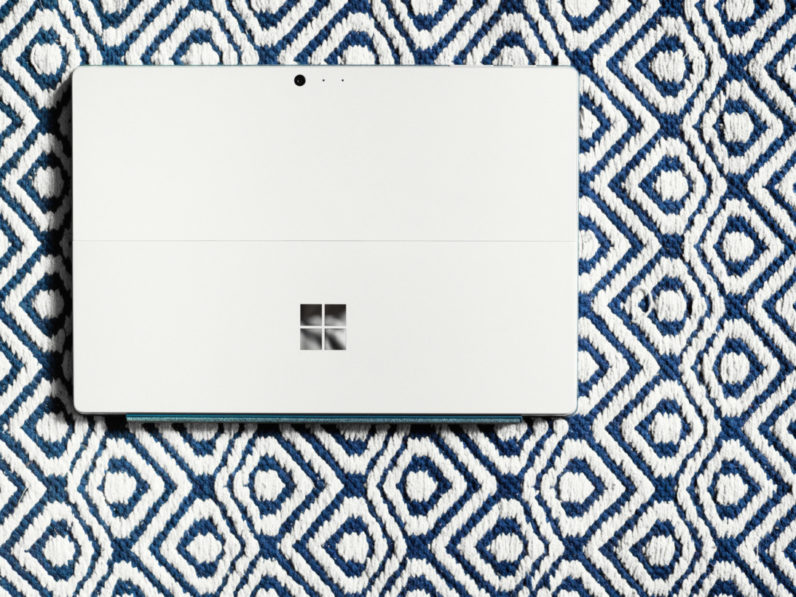 Color me impressed. Through a combination of a 20 percent larger battery, a more efficient processor, and some hardware and software optimizations, Microsoft was able to improve longevity dramatically for real-world usage, to the extent it feels as good as my Surface Book. It  feels good to be rid of charger anxiety.

Of course, you’ll want to keep your settings in check. Most of my testing was done using the ‘Recommended’ power mode and the ‘Suggested’ brightness level. It helps that I didn’t feel the need to crank up the brightness on the new Pro like I did on previous Surfaces, as using it on maximum brightness will drain the device much more quickly.

The Surface Book has been my primary computer since it was announced in October 2015, but at heart, I always preferred the Pro. I’ve missed instant transition between tablet and and laptop modes, the lighter weight, and how much easier it was to stuff in my camera bag. Though the dedicated GPU is nice, the main only reason I gravitated to the Surface Book over the Pro was that it’s battery was so much better.

I’m really glad that’s no longer the case. The longer battery and small touches allow the Surface Pro to convincingly claim  it’s the “tablet that can replace your laptop.” Of course, Microsoft already proved the form factor could work with the Pro 3 and 4 – as evidenced by the increasing number of Surfaces I’ve started to see at coffee shops. If you fundamentally dislike the form factor, the new Surface Pro will do nothing to change your mind.

That’s why I think it’s likely the Surface Laptop will become Microsoft’s best seller. Some people just want a regular laptop, and that’s okay, even if it’s a little boring. Not to mention that, despite being priced identically for equivalent specs, you’ll be paying $150 more if you need a keyboard for the Pro (which you probably do). 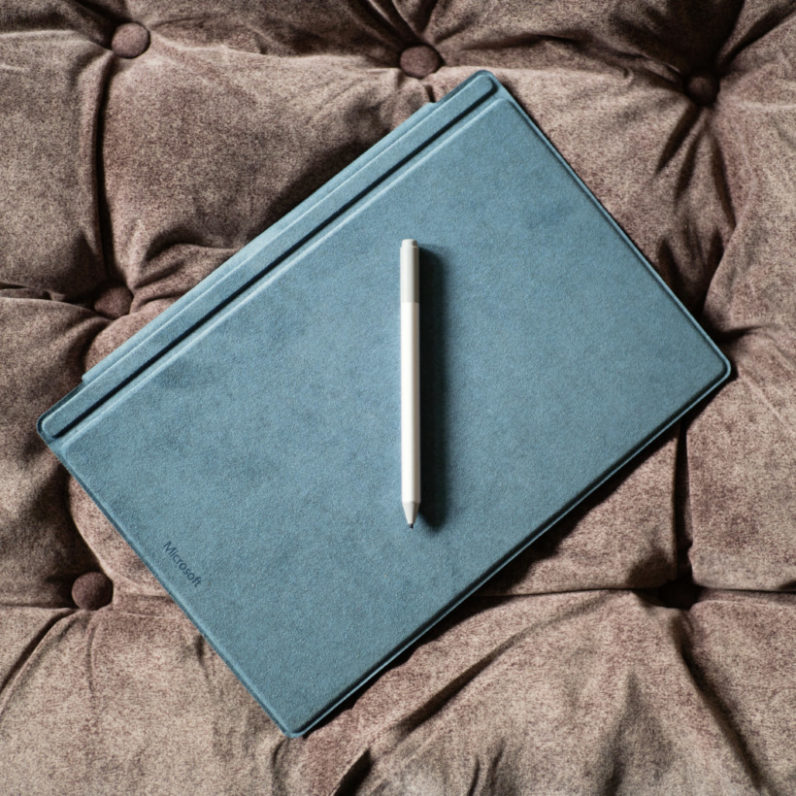 Then there’s the increasingly heated third-party competition. HP’s Spectre X2 matches the $1,299 config (Core i5, 8GB RAM, 256GB Storage) for $1169, but comes with the superior Iris graphics and actually includes a keyboard. The Lenovo Yoga gets you a Core i7 (albeit without Iris), 16GB of RAM and 512GB of storage for ~$1349. And a small startup built a Surface clone called the Eve V that manages to pack in an i7 and 16GB of RAM and a keyboard for $1399.

But that’s the beauty of Windows: You have a choice. The alternatives all have their own weaknesses, and to me, this new Surface Pro represents Windows at its best balance of refinement and versatility – laptop or not. It may not be the most exciting refresh in the world, but it’s a solid example of how tasteful iterative changes can elevate a product to new levels.

Just give us a Thunderbolt port next time, okay Microsoft?