If the last decade has taught us anything, it’s that ten years can be a very long time in technology. And one needn’t look any further than the music industry to see how technology has shifted and shaped the way we listen to, share and discover bands and artists.

As cool as MiniDisc players were back at the turn of the century, the advent of mp3 players and smartphones breathed new life into the music realm. You can now search, scrobble and randomize a concoction of music from your pocket thanks to the myriad of music-streaming apps out there – Spotify, Rdio, Google Play Music, Deezer, Xbox Music, Last.fm, Pandora, SoundCloud, TuneIn and more.

But what we’re looking to help surface here are the plethora of apps specifically designed to help you discover new music and, perhaps, meet like-minded people along the way. Ones that may have escaped your radar thus far.

Soundwave is a mobile-first app that lets you share what you’re listening to in real-time. Listen to a song on your device’s native music player, or through Spotify and Rdio, and it will be added to your profile, alongside the cover art.

And in the wake of a recent update, you can now tap on any song’s image to reveal a history of who else has been listening to it, helping you find musical soulmates.

Indeed, discovery is the main thrust of what Soundwave is about. Users can follow one another and see each other’s activity in a feed as they listen to music. In most cases, you’ll receive an instant 30-second preview of songs that other people are listening to. Tap on any song and you can browse related content on YouTube and SoundCloud, or procure a download if you’re sufficiently enamored by it. In the iOS version, you can also create playlists.

Shazam likely needs little introduction, but it would be foolish to ignore what has become  one of the most popular music-tagging and discovery apps out there.

In a nutshell, Shazam listens to any song playing in the background – it could be on the radio, TV, in a shop…anywhere – and tells you the name of the song and artist.

It then links you through to buy or listen to the songs through Amazon, YouTube, Rdio, Spotify and iTunes, while also checking out the artist’s biography and discography

It even features neat interactive maps to see the most-tagged songs by region.

Band of the Day

Band of the Day is the perennially popular iPhone app that was pipped to pole position in Apple’s 2011 app of the year awards. But there’s no great shame in coming second to Instagram, right? Right.

As of one week ago, Band of the Day is available for Android users too, serving up a beautifully designed app that surfaces one new artist each day, hand-picked by the good folks working behind the scenes at 955 Dreams. The calendar-style grid lets you jump back in time through the archives, and you can listen to a full-length, ad-free song for each artist, while perusing biographies, videos, and more. 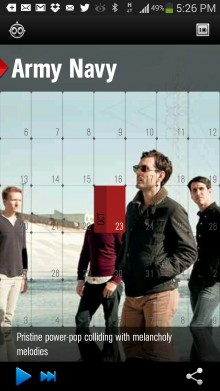 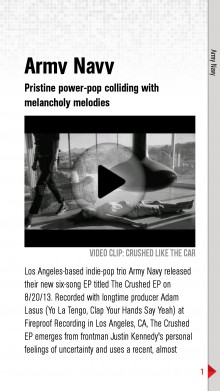 The music is streamed directly from 955 Dreams’ servers, and the company works with labels and the musicians to secure the rights to stream featured artists.

The ‘Indie Shuffle’ could be a term to describe a fairly generic dancing style performed during jangly guitar songs in clubs. But it also happens to be the name of a San Francisco-based indie music blog, which shuffles (get it?) through a tonne of independent music — old and new — to surface the pick of the bunch.

Indie Shuffle’s mobile app taps the SoundCloud API to provide curated, ad-free playlists based on similar artists and genres. So you can launch playlists starting with a specific genre, browse the ‘Popular’ list, or check out the latest recommendations. Each song also has a review written by one of their staff-writers. 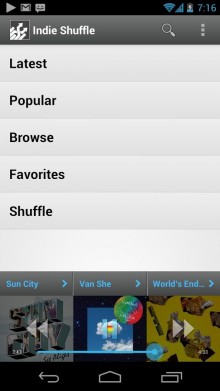 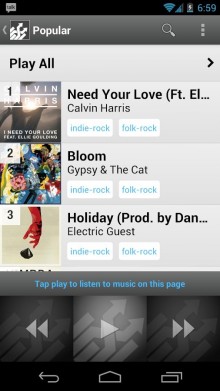 In addition to viewing by ‘Latest’ or ‘Popular’, you can simply browse the catalogue by genre or save and view your favorites. Indie Shuffle is a really sweet little app.

Sonarflow is a striking music-discovery app that makes finding your next favorite record as visually rewarding as the actual listening experience. Well, almost.

It’s all about finding new music based on the artists and genres you already listen to. Forget lists and searches, this is all about swiping and pinching as Sonarflow throws suggestions at you in an aesthetically-pleasing, dynamic-wordcloud kind of way.

In Discovery Mode Sonarflow recommends artists and songs based on the music on your device – so if you have Bob Dylan on there, you’ll see little bubbled-suggestions of artists such as Neil Young or Woody Guthrie.

Sonarflow has one version for Android that serves up new music and preview clips powered by 7digital, and even lets you Scrobble your tracks to Last.fm. For iOS, however, there is one for Spotify and one for iTunes, letting you tap the respective music service’s mammoth libraries to discover new music.

Rormix surfaces music videos from unsigned artists based on your tastes. So, for example, a search for ‘The Black Keys’ will unearth artists with a similar sound to the rock two-piece.

The included bands are actually hand-picked by the good folks at Rormix, and future plans include incentivizing users to become the tastemakers, by offering tickets and merchandise.

Bloom.fm first emerged back in January with a stunning iPhone app that offers listeners both on-demand streaming and randomized, infinite ‘radio’ playlists similar to Pandora and Last.fm. Available only in the UK, the app is restricted through a trio of subscription packages set at £1, £5 and £10 per month. It recently launched for Android too.

The app sports a very quirky-yet-beautiful design, consisting of geometric shapes that merge to form flowers, petals and bees which users can interact with to play themed radio stations, individual tracks and records, custom playlists and anything stored in their local library.

Bloom.fm is a treat of an app, and yes, it’s a shame it’s only available in the UK for now.

Earbits is a new breed of artist-focused Internet radio, one that finally went mobile starting with Android back in April, before launching on iOS too. 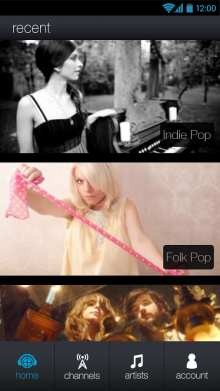 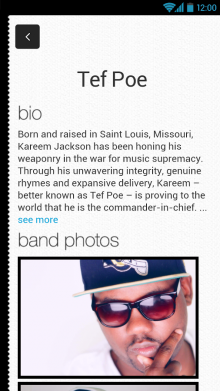 You can also receive music channel recommendations based on existing songs stored on your handset.

Pitchfork Weekly surfaces some of the best editorial from across the publication, covering features, reviews and audio/video, not to mention original programming from Pitchfork.TV. There’s also staff-produced podcasts covering discussions about all things, well, music.

While it is iOS-only for now, an Android-optimized incarnation is scheduled for launch in early 2014.

Discovr could perhaps best be described as Twitter for music, letting you discover artists similar to your favorite bands using interactive music maps.

You can also follow your favorite artists, with Discovr keeping you up-to-date with their songs, photos and videos. Crucially, you can also play full-length songs directly in the app via Spotify, Rdio, Deezer, SoundCloud, and YouTube.

Yap Music brings the simplicity of Instagram to an iPhone music discovery app, letting you browse the Facebook feeds from your favorite artists in real-time. As you browse, Yap Music plays iTunes track previews of their latest songs.

The usefulness of Yap Music relies on a couple of factors. It’s pretty much entirely dependent on Facebook, and is only as good as the number of artists you’ve chosen to ‘Like’ on the social network. So yeah, it’s restricted in its scope, but if you’re active on Facebook, it’s not a bad effort at all.

Shuffler.fm is a music discovery service designed to help users navigate the music shared by blogs in a visual way. It basically brings a Flipboard-esque browsing experience to those seeking to discover new music, though it remains iOS and Web-only.

Shuffler.fm integrates with a myriad of music blogs and sites, letting you peruse content from multiple genres – you can tap on a specific style, and the most popular songs being shared by music blogs from a particular genre are unveiled. You can even watch each song’s video, where it’s available, and read more by loading up the original blog post directly within the app.

Sadly, Songza is restricted to users in the US and Canada, but it is a really sweet app and deserves a mention.

Songza distinguishes itself within the music streaming space by asking you specific questions (for example, are you working right now? Do you want to relax?) to help it understand how your daily routine intersects with your genre preferences. Subsequently, the app offers playlists fit for the occasion, each one curated by a real-life human.

Most services attempt to curate music solely through taste, rather than taste AND mood. Though for UK music-lovers, there is also the delightful Moment.us, which is iOS-only for now.

Soundrop is all about social music discovery through hosting what it refers to as ‘listening rooms’ within Spotify. Indeed, Soundrop started life purely as an app within Spotify, but eventually rolled out a dedicated iPhone incarnation last summer.

In these virtual listening room, users can suggest and upvote tracks from a specific music genre, such as Chill Out or Dubstep, and explore rooms based on certain themes. Within these rooms, you can talk about the your shared love of music, and even arrange to meet up at special events.

You will, however, require a Spotify Premium subsription to listen to music played within the rooms.

As we wrote way back in 2009, London-based startup WhoSampled answers music’s most frustrating question: Where do I recognize that song from? And with the launch of its iOS app last summer, it cranked things up a notch by letting you scan the music on your mobile device to tell you who has sampled, remixed and covered each song.

For each artist, you can view some of the samples it throws up or, indeed, the cover version. You can then listen to the different versions within the app, thanks to its integration with the likes of VEVO and YouTube, which delivers the songs side-by-side for comparison. And, in a nice little money-earning move by the developers, it integrates seamlessly with iTunes too, so you can purchase said music there and then.

Sadly, WhoSampled remains iOS-only for now. But it is a great app for sure.

SoundTracking is the mobile app that lets you share the soundtrack to your life.

The built-in song search and auto-detection technology helps you identify what you’re listening too instantly, and share a snippet, photo and location in a single ‘music moment’ to Facebook, Twitter, Instagram and Foursquare. Friends and followers can like and comment on each other’s music, and play songs directly in Spotify and Rdio, but they’ll need a subscription.

If you like to get out to gigs, then this one’s for you. Songkick scans your personal music collection and keeps you in the loop about gigs and concerts in your area based on your music taste. 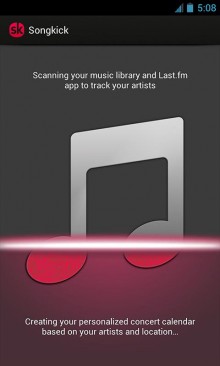 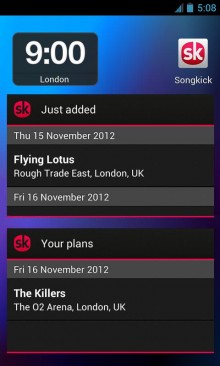 It’s constantly working in the background, ready to tell you when one of your favorite (and forgotten?) musicians is playing nearby. You’ll get a pop-up alert from Songkick, and an email if you wish, telling you who’s playing where and when.

Such a simple, but genius service.