SoundTracking, a mobile app that allows users to share “the soundtrack to their lives”, has launched a redesigned iOS app for the iPhone 5, iPod Touch, and iPad. With this redesign comes a new user interface, sharing and discovery features, and an updated “social experience” for its users.

The company says that the updated SoundTracking for iOS is “significantly faster and more streamlined” and that the audiovisual experience has been “enhanced” with more focus on simplifying the photo and play button, while adding in more social expression and discovery features.

Created by Schematic Labs and launched at South by Southwest in 2011, SoundTracking has been gaining popularity. In the first few weeks after SXSW, the app was downloaded 100,000 times from Apple’s App store, named app of the month by Billboard magazine, along with other accolades. Today, the company says it reaches over 8 million impressions of music moments that are shared across Facebook, Twitter, and Foursquare. The community has been quite active as well, having tagged songs and moments from over 240,000 unique venues and 160,000 neighborhoods, towns, and cities.

The need for an updated user interface 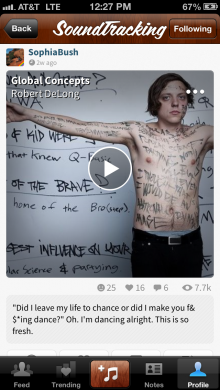 CEO and co-founder Steve Jang says that the redesign was focused around reducing “visual complexity” while also increasing the simplicity of every interaction and improving the user’s music moments. He says that SoundTracking has been monitoring user behavior and has tried to let those lessons learned augment its product vision. Jang says:

We heard from many in our community that they wanted to browse music moments visually by images and an easy way to view and play many more of these moments in a more fluid way than in the song title textual feed previously used. We rethought how our music timeline works and redesigned the feed experience to be much more of an scrolling audiovisual experience with a large, high resolution photos serving essentially as play buttons. Think of it as a general notion of crossfading between and through your music activity feed on SoundTracking.

With regard to user profiles, we found many people wanted a much more customizable and beautiful presence for their identity on SoundTracking.  As part of their music identity, people not only wanted to add their unique style or artwork, but also wanted to show their personal music timeline and their most popular posts and favorites.  We felt this was a great multi-dimensional way to let people view and discover each other’s music personalities.

SoundTracking says that its new social features were added in order to help make its user experience more meaningful and connected to a person’s real life. The service has seen many music fans and technology enthusiasts (aka geeks) sharing and interacting with each other, but Jang says that the company noticed that people didn’t always want to see what was trending worldwide. For some, the interest was with what’s happening in their local neighborhood, city, or town and that they were dedicating songs to their friends and artists by tagging them in their moments.

This insight helped lead SoundTracking to create Trending Nearby, a feature that it says allows users to see others in their neighborhood and share with them music from local venues.

What’s been added to the iOS app

Available for both iPhone and iPad devices, this service, which acts like it’s the Instagram for music or a social sharing version of Shazam, has several new features, including:

While it’s listed as being added to the iOS app, it’s important to note that the Twitter Cards feature and the Foursquare integration have already been announced a while ago. Jang said that both of these features have been improved since they were released. With Twitter Cards, since its integration, SoundTracking says it’s seen 30% more traffic coming to its site from Twitter, especially since now users can view and play music right from the popular social network. Even artists and DJs who share a lot of music are believed to find the integration useful and perhaps one of the easiest ways to share music, according to Jang.

With Foursquare, SoundTracking has updated the integration so that now people can check into a venue and add a song directly from the app. 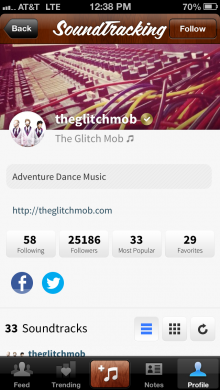 As typical with any social network, one of the things that SoundTracking has to deal with is verifying who everyone says they are. It’s quite frustrating for artists, DJs, musicians, and the like to participate in a community to share their work if someone is impersonating them.

To that end, SoundTracking has rolled out verified profiles. Jang says that through its close integration with Twitter, any artist, DJ, or celebrity that has a verified Twitter account will automatically be verified on SoundTracking, if the profiles are connected. The company states that it has a lot of artists joining the service who were already using Twitter. Its Verified Artist Program will be that guarantee that users are following the genuine person.