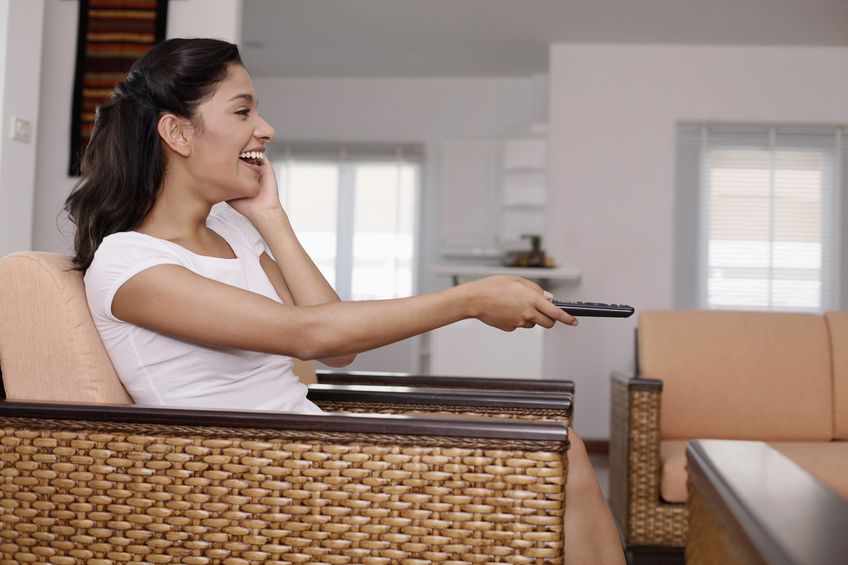 43% of Brazilian Internet users browse the Web while watching TV, the research firm IBOPE Nielsen Online revealed in its Social TV report. In other words, the dual-screen viewing trend we note in other markets such as the US is also growing in Brazil.

Still, Internet users represent a sizable group – according to IBOPE, 82.6 million Brazilians had access to the Internet at work or at home during the first quarter of 2012, out of a total population of 192 million. More importantly, this represents a 5% year-on-year increase, which means that Internet access is becoming more and more common.

In addition, fixed and mobile broadband are also expanding in the country, supported by public programs and by the rise of 3G. The proportion of smartphone owners is particularly noteworthy among Internet users; according to a recent Livra survey, 45% of them own a smartphone.

All of these changes create favorable conditions for new habits to emerge, and social TV is one of them. This is not too surprising, considering that all things social perform very well in Brazil (see our previous story). Combined with the fact that almost half of the population watches TV for more than 3 hours a day, it’s easy to understand that a large number of users are now using two screens at the same time on a regular basis. Here’s a graph summarizing some of the study’s findings: 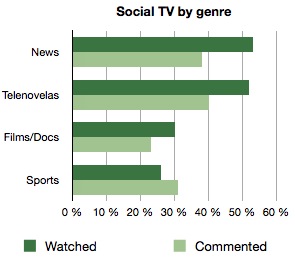 News, telenovelas, movies and sports are the most popular genres among dual-screen viewers. When it comes to commenting, however, the ranking is slightly different, with telenovelas taking the lead – a phenomenon that often generates national Twitter trending topics.

Interestingly, this trend goes beyond smartphones, as users also use PCs and feature phones while watching TV. As we reported, feature phones in Brazil are often much more than ‘dumb phones,’ and provide their users with advanced functionalities, such as posting tweets or Facebook status updates (see our story ‘5 things you didn’t know you could do with a SMS in Brazil‘).

As for TV broadcasters, they may be relieved to learn that most of the online browsing is actually related to on-screen programs – around 70% of the surveyed dual-screen users said they used the Internet to look for additional information about the programs they are watching.

On the other hand, 80% acknowledge they already turned on their TV or changed the channel as a result of a message they saw online.

For IBOPE Nielsen’s analyst José Calazans, there’s no reason to worry about this trend: “Simultaneous consumption of Internet and TV content shows that users aren’t abandoning one source for another. It confirms there’s an opportunity to explore the huge affinity that Brazilians have for these two supports.”

This could certainly represent an interesting market for companion TV platforms and apps; while this segment is already fairly crowded in Europe and in the US, the offering is much more limited in Latin America, although regional players such as the Argentine startup Comenta.tv are also starting to emerge.