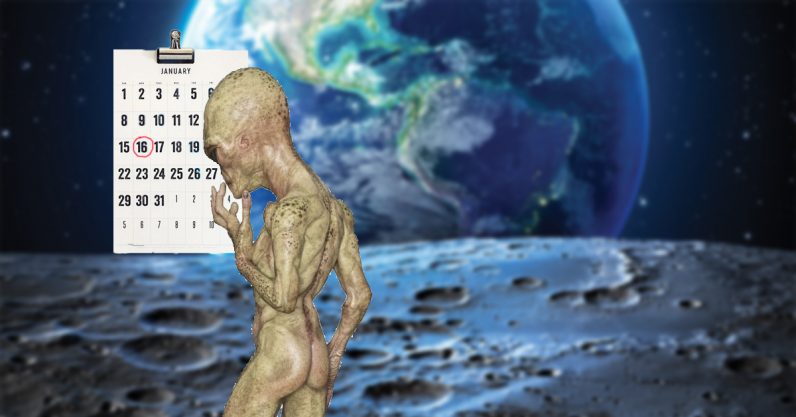 An odd radio signal is coming from space, starting and stopping in regular 16-day cycles. A team of Canadian astronomers was the first to report finding the source, which they discovered using a novel radio telescope.

This newly-discovered burst of radio waves, called FRB 180814.J0422+73, does not fit any known cause, leading to range-ranging speculations on its nature, ranging from simple interactions between stars, to suggestions the waves are signals from intelligent lifeforms.

A burst of inspiration

In 2007, the first fast radio burst (FRB) —a short-lived radio signal from space — was discovered. Since that time, researchers have found several more such events, but repeating events remained rare. They are also usually short-lived, making them exceptionally difficult to track and study.

“Despite searches for periodicity in repeat burst arrival times on time scales from milliseconds to many days, these bursts have hitherto been observed to appear sporadically, and though clustered, without a regular pattern,” researchers report in a pre-print published on arVix.

This new discovery is the first instance of an event resembling a FSB repeating over a significant period of time.

When radio astronomers studying data from the Canadian Hydrogen Intensity Mapping Experiment (CHIME) found the burst, they examined 400 earlier observations of the region from the instrument. Soon, the team realized the signal repeated once every 16 days.

Read: [An astrobiologist explains why invisible aliens could be among us]

Bursts from this mysterious source are seen approximately once an hour over four days, followed by a period of inactivity lasting roughly 12 days. Then, the signal repeats once more. However, signals seen during these periods of activity are irregular, causing further confusion in understanding the nature of these events.

“In 28 bursts recorded from 16th September 2018 through 30th October 2019, we find that bursts arrive in a 4.0-day phase window, with some cycles showing no bursts, and some showing multiple bursts,” researchers report.

CHIME for a change

The CHIME network operates at lower frequencies than many other instruments — 400 Hertz — compared to the 700 Hz at which the most-similar instrument operates. The instrument is also capable of viewing an area of sky 14 degrees across at one time — the size of 784 full moons laid out in a perfect square.

“It consists of four 100-meter-long, semi-cylindrical antennas that look like a half-pipe for snowboarding. The facility operates around the clock and scans the entire northern sky each day — giving it an excellent shot at catching transient FRBs,” Alexandra Witze reports in Nature.

The four cylindrical reflectors, each measuring 20 meters wide by 100 meters long (65×328 feet), are aligned north to south to capture signals stretching (nearly) from horizon to horizon. The focus of each cylinder reflects radio waves up to 256 dual-polarization antennas, providing the instrument with an enormous field of view of the sky. Each of these antennae is capable of receiving signals with frequencies from 400 to 800 MHz, which are then amplified in two stages using low-noise amplifiers developed for cellular communications.

“To search for FRBs, CHIME will continuously scan 1024 separate points or “beams” on the sky 24/7. Each beam is sampled at 16,000 different frequencies and at a rate of 1000 times per second, corresponding to 130 billion bits of data per second to be sifted through in real-time,” the CHIME team describes.

In the video below by McGill University, the mysteries of FRB’s are explored with instruments including the CHIME radio telescope.

Over and over in the history of astronomy, a new instrument finds things we never expected to see. — astrophysicist Rainer Weiss, MIT.

This novel radio telescope was not yet fully commissioned at the time the earliest observations of FRB 180814 were taken, potentially creating gaps in data about the event. It is possible that further observations of the radio source using this instrument could provide significant information about the nature of this unusual signal.

“Throughout our pre-commissioning phase, the telescope and CHIME/FRB instrument were operated intermittently without a simple schedule and with varying levels of sensitivity. For this reason, calculating the on-sky exposure to any position is challenging at present,” researchers describe.

Astronomers at this radio network in the hills of British Columbia traced the signal to a spiral galaxy 500 million light-years from the Milky Way. Further investigations will be needed to determine which object in that galaxy is responsible for the outbursts.

What is causing this bizarre phenomenon?

When astronomers see well-timed regular cycles, it usually suggests that the body they are examining is rotating. However, the periods of activity and inactivity associated with this signal are not as well-defined as most cyclical events seen in space. Such signals (like those coming from ultra-small, super-dense pulsars) are usually far more regular (and much faster) than what is seen with this newly-discovered source.

This cycle might be explained if a powerful radio source is orbiting a star along an orbit that would periodically bring it “behind” its parent star as seen from Earth. However, this idea does not explain what could be producing the hour-long cycle of bursts.

In the video below, FRB’s are seen throughout the night sky.

Animation illustrating the random appearance of Fast Radio Bursts on the sky. from NRAO Outreach on Vimeo.

Stellar winds, emanating from a star, might be blocking radio waves produced by a body “behind” it, producing the on-again/off-again nature of the signals as seen from Earth. But, this cycle may be too regular to be explained by this theory.

Although some reports of this radio source suggest the energy is “sending signals to Earth,” there is no reason to believe the energy is directed toward our planet.

In 1967, the astronomer Jocelyn Bell Burnell discovered regular repeating signals. Without being able to explain the observation, she abbreviated the finding as LGM (Little Green Men). Astronomers and astrophysicists soon realized these repeating bursts of energy were the products of a natural type of star we now know as pulsars.

The chances that this radio energy is a signal from an extraterrestrial civilization is unlikely, at best. But the mystery of what is causing this signal remains unanswered.

Read next: George Soros: Zuckerberg is on Trump's side and must be removed