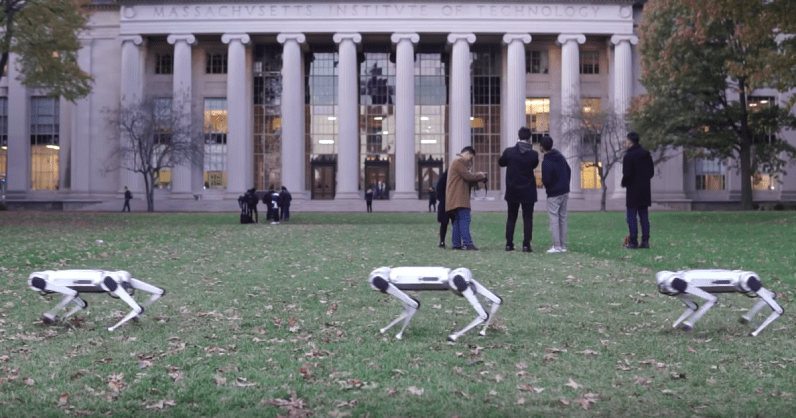 Every time I see robots marching around in perfect synchronization, Darth Vader’s theme from Star Wars – officially named ‘The Imperial March’ comes to my mind. And that was my instant reaction when I saw the video of MIT‘s new mini cheetah robots.

Last weekend, researchers at MIT released a video of nine mini cheetah robots frolicking in the ground, performing backflips, and playing soccer. While the first scene of these robots marching across the screen in a perfect order might be scary, the rest of the video is goofy and fun. At a point, it even feels like a bunch of puppies just enjoying the fall leaves.

The mini cheetah was first shown off in March. The robot weighs 9.07 kgs and can run at a speed of 8 km/hour. It is a stripped-down version of its predecessor – the Cheetah 3.

MIT has developed this robot with modularity in focus. Each of its legs is powered by three electric motors built out of off-the-shelf parts.

If you’re interested in AI apocalypse, you should start with this wonderful beginner’s guide written by my colleague Tristan.