In January, WhatsApp introduced its controversial privacy policy change with a pop-up in the app. While the outrage made the company delay it for a few months, the updated policy is kicking in from May 15.

Many people have an issue with this move because it’ll lead to WhatsApp sharing data with other Facebook apps. This has led to many folks trying out new messaging software.

Data from analytics firm SensorTower suggests that downloads of the privacy-focused Signal app grew by nearly 1,200% year-on-year throughout Q1 2021. It was downloaded an estimated 64.6 million times. January was the blockbuster month for the app with more than 51 million downloads. 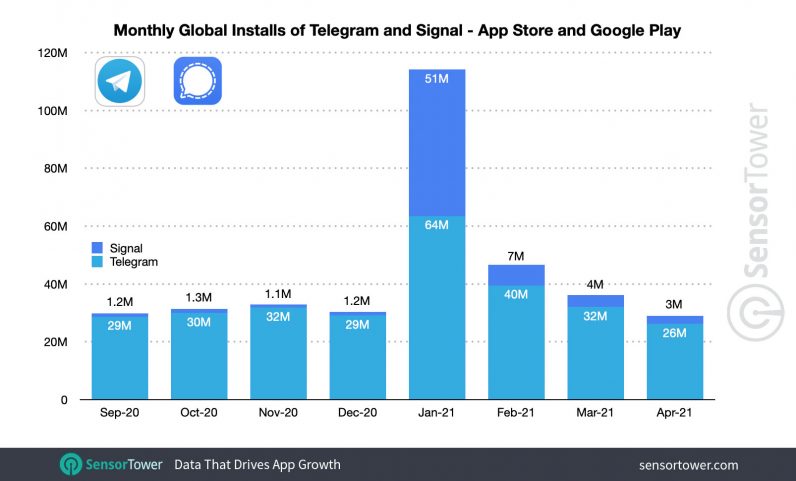 Telegram’s download growth in the same period was 98%, and the app recorded 161 million installs. This surge also helped the messenger cross the mark of 500 million monthly active users on the platform.

This shouldn’t be a surprise, as Telegram has been adding new features left-and-right. This includes a WhatsApp chat import and a Clubhouse-style live-audio chat. On top of this, Telegram is scheduled to launch group video calls on the app this month.

While these two apps were the big winners from WhatsApp’s policy change, other platforms with experimental protocols and authentication features such as Matrix-based Element and no-phone signup app Session have also thrived.

However, all this hasn’t stalled WhatsApp’s growth in a meaningful way. SensorTower’s data suggests that while the Facebook-owned app’s installs declined 43% year-on-year for the January-April period, it still managed to beat its rivals with 172.3 million downloads. That’s also a testament to WhatsApp’s scale as an app with more than 2 billion monthly active users.

People might not move away from WhatsApp completely but the download growth of other apps suggests that they’re open to trying out new platforms, and probably use multiple apps to chat with different sets of folks.