If you own a smartphone and have a penchant for running or cycling, chances are you’ve used your pocket rocket as a personal music player, or used one of the many fitness-tracking apps out there.

But what if you’re more inclined to hit the waves with your surfboard, snorkel the Great Barrier Reef, or butterfly at your local swimming pool? Well, things aren’t quite so straight-forward from a technologically-augmented perspective.

We’ve seen a slew of waterproof cases pass through our proverbial doors in recent years, such as the LifeProof and RainBallet to name a couple. But there has been a swell of companies promising ways to bypass cases altogether, offering waterproof sealants for all your wonderful gadgets.

The surge in such services seemed to happen some time in 2011/2012, when HzO, P2i and Liquipel all came to the fore. The latter of these encourages you to send your smartphones, tablets and headphones in to be treated with its magical ointment, so you can front-crawl your way to fitness while listening to your favorite beats.

And this year, we’ve also started to see the first high-profile waterproof smartphones emerge from manufacturers themselves, with the mighty Samsung unveiling its S4 ‘Active’ variant (check our hands-on), followed by the Sony Xperia Z. There’s also the Casio G’zOne Commando and Kyocera Torque.

Potential warranty issues aside, it’s clear that rugged ‘life-proof’ technology is on the up, and it opens the door for extending a smartphone’s usefulness in everyday life. I mean, just check out this video, showing footage filmed underwater on an Xperia Z.

But fully-waterproofed gadgets are still in their infancy, evidenced by the fact that, well, you rarely ever see anyone with a case-less iPhone glued to their arm while bodyboarding. Or, for that matter, an mp3 player strapped to the back of their goggles while doing lengths in the pool.

Conversely, I’d posit that most joggers I see in the streets and parks around London are either tracking their movements with an app such as Runkeeper, or simply using their mobile phone as a music player.

So what place does waterproofed tech have in our lives? Will the technology that enables it sink…or swim?

As things stand, waterproofed gadgets still feel very much like a show of technology. That’s to say, it’s more like “look at what we’re capable of doing”, rather than properly fixing a problem. As one publication noted with the Samsung Galaxy S4 Active, the warranty doesn’t cover water damage, even though the device has been fully marketed as a water-friendly device.

Also, touchscreens are known to be ineffective in water, so controlling it does come with its limitations. That all said, there is a handful of scenarios where waterproof contraptions will come in handy. 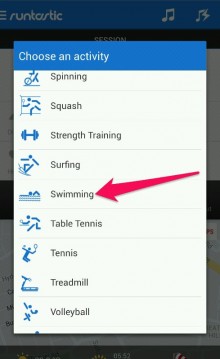 I was surprised to find some fitness apps, including Runtastic, already have surfing and swimming listed as activities. I would be curious to know how many people actually use the app to track such activity – I’m guessing (hoping) they use waterproof cases. This type of activity-tracking will undoubtedly rise with the proliferation of waterproof devices.

In terms of tracking your swims with GPS, well, that may seem a little silly on the surface (pardon the pun), but there’s no reason at all why you wouldn’t want to track the number of meters or miles you do in the local pool.

The only real downside here is that the GPS signal will be restricted if the pool isn’t in an open environment – so no basements. If you swim in a lido or at the seaside for example, this won’t be a problem.

Tracking aside, you can of course listen to music and take photographs with your device, though this will no doubt raise some privacy concerns the more popular they become in pools.

Scuba diving and snorkeling are particularly interesting use-cases, given that previously you would need to procure fairly specialized equipment to venture to the ocean’s depths to take photos.

However, this isn’t made much easier with the likes of Samsung’s S4 Active, given that it’s only designed to be fully waterproof to around one meter, and even then only for 30 minutes.

When you put the device into Aqua Mode, the camera shutter is then activated by hitting the volume button, which circumvents touchscreen issues underwater. Alternatively, you can hit ‘record’ on your device before submerging.

But this isn’t for deep-divers – just those that like to snorkel or free-dive a few feet below the surface. Plus, you will have to remember to rinse it properly after entering salt water.

As for tracking your movements, even if the S4 Active did promise to work at greater depths, GPS doesn’t work well underwater. That’s a problem for smartphone- and submarine-owners alike.

I spoke with Alexander Casassovici, founder of Paris-based Scuba startup Diveboard, to get his thoughts on how he feels waterproofed gadgets could impact not only the use of his company’s mobile app, but scuba diving on the whole.

“I wouldn’t trust a phone with anything life-related,” he says. “I personally wouldn’t replace my dive computer with a phone and some pressure sensor.”

Though he concedes that there may be some benefits to making it easier to snap photos underwater, he also rightly points out that lighting issues would typically lead to poor quality, especially in murkier waters. However, where Casassovici reckons the technology would help, is by removing the fear among divers in bringing their contraptions onto the boat in the first place.

“This is often the root cause for not logging your dive on Diveboard directly from the boat,” he explains. “For me, waterproof phones are more about being able to use them freely than about actually diving with them.”

This is an interesting point for sure – as anyone who’s been diving before will know, anything you really, really don’t want to get wet stays behind in a secure locker on dry land. If a diver is assured that their mobile phone is safe from splashes, this could tempt them to take it with them.

As things stand with waterproofing and the inherent ‘build’ of mobile phones, they’re really not up to the task of becoming a diver’s right-hand man. But Casassovici has some ideas of where he’d like to see things go in the future.

“If you could use your phone during a dive to log the dive profile, and take photos and use cool apps to help you identify species – that would be awesome,” he says.

“Add to it an underwater communication mechanism and that would have a lot of potential – for example getting your buddy’s attention is always a challenge,” he continues. “I’ve been dreaming of image-recognition that would allow species-identification. It would probably smoothen the overall (species) logging process – but it’s not going to be really game-changing.”

This is all but a dream for now.

Music to your ears

I recently procured a waterproof iPod shuffle from a company called Underwater Audio, and for me this represents one of the most obvious advantages of such technology.


Granted, it will cost you north of $100 more than a standard Shuffle to buy a waterproofed version, but if you like to be serenaded by Sergeant Pepper while swimming, well, it’s a worthwhile investment.

As with running, carrying a heavy smartphone strapped to your arm in a pool can be annoying when all you want is some tunes to alleviate the boredom. With a mini waterproof music player, you can just clip it to the back of your goggles and you don’t even notice.

The model offered by Underwater Audio promises to work in up to 200ft of water – so this could potentially work well for scuba divers. However, it will also require waterproof earbuds which come with the following recommendation: “to avoid the risk of serious injury, do not use below 3.05m (10ft)”. This is presumably to do with the risks involved when trying to equalize.

At any rate, if you’re just looking to lie back in the pool with your ears submerged while listening to tranquil tunes, it is a pretty soothing experience.

There will undoubtedly be many advantages to having waterproofed gadgets and technology. But given the inherent restrictions of both smartphones and the sealant technology, it feels like things still have a long way to go.

Sure, you can take videos and photos in a few feet of water, but the lighting has to be decent, while touchscreens and GPS aren’t effective below the surface.

That said, you can now track your swims with ease, meaning your quantified-self credentials will get a major shot in the arm. And all those triathletes out there will likely jump for joy given that their time in the pool can be just as easy to monitor as their hours spent on bikes or pounding the pavements.

Over and above all this, it seems clear that the biggest advantage above all else will be when waterproofing is baked right into every single gadget you buy – you will no longer have to worry about spills or accidental drops down the toilet or in pools. As Diveboard’s Casassovici says, the fear factor will no longer be there and people will be willing to take their phones to more places.

For now, you still have to rely on special ‘waterproof’ editions, or send your existing device off to be treated. This is great ‘n all, but until all our gadgets are waterproofed by default, it’s difficult to see how such advances won’t be viewed as niche or gimmicky.