There’s no shortage of health and fitness apps out there, so we thought we’d take a look at some of the more popular GPS fitness-tracking apps for runners, walkers and cyclists, to see what’s good about them, what’s not so good and, well, hopefully help you decide which is best for you.

Please note, we’ve chosen ones that cover the majority of the smartphone market – so all these are available on both iOS and Android. And our main focus is on ease-of-use, design and functionality.

With around 20 million users, RunKeeper is one of the stalwarts of the GPS-based fitness app scene. It has been around since the dawn of the modern smartphone era, with its first iPhone app rolling out in August 2008, just a few weeks after the Apple App Store went live.

RunKeeper has evolved a lot since its inception. Today, the interface of its mobile offerings is clean, simple to navigate and it makes it easy to launch into a new activity as soon as you launch the app.

So if you don’t want any of the bells-and-whistles integrations or ‘extra’ features, you can simply click ‘Start Activity’ on the main screen and they’re pretty much good to go. No extra clicks needed.

You can pause or stop your activity and, by swiping in from the side, access Google Maps to navigate your way around your route. As with any fitness-tracking app worth its salt, you can view detailed stats around your pace, distance, time, and calories burned, and a mile-by-mile breakdown of how you performed.

But it’s the little touches that can make the difference. If you’re running on the treadmill, or somewhere where GPS isn’t available, you can manually enter your stats. It also lets you choose any song from your device by letting you open third-party apps directly from within RunKeeper, this includes Spotify.

The basic free version for RunKeeper will suffice for most people, but for those looking for a little more, $4.99 a month or $19.99 a year lets you broadcast your run live for family and friends to follow online. This subscription also gets you additional data insights, including how you progress over time. There’s also training plans available through in-app purchases, starting at around $20.

Overall, RunKeeper is a solid GPS fitness-tracking app that lets you keep things as simple or advanced as you like, with a range of integrations across hardware and third-party apps.

Runtastic has been building out its fitness-tracking and coaching empire in recent times, pushing to target those who like to work-out at home too.

While I still switch between a handful of GPS fitness apps from time to time, Runtastic is one I always keep coming back to.

You’re presented with a ‘Start Workout’ button as soon as you launch the app. Plus, Runtastic PRO – the $4.99 version of Runtastic – for Android features a very neat integration with Google Earth. You can basically replay any of your runs from the past in Street View, retracing your steps and seeing the exact route.

If you’ve used other tracking apps before, Runtastic’s feature-set will be familiar to you.

There’s maps for navigation, direct access to your music – including ‘power’ songs to help you through the latter stages of a run, and it also breaks down your activity mile-by-mile to show where you excelled and where you didn’t. And, as with RunKeeper, you can manually enter an activity for times when GPS simply won’t do.

There’s also a bunch of other neat add-on features and integrations that make Runtastic well worth your time.

Aesthetically, Strava is a beautifully designed mobile app. Confusingly though, it separates out its offering into two individual apps – one branded as ‘Running’ and one as ‘Cycling’. But within each version, you can stipulate whether you’re cycling, running, walking or doing any other kind of activity, so for all intents and purposes they’re the same app.

At any rate, Strava could elevate itself to become my top GPS fitness-tracking app if it gives its Android version a little more design lovin’.

As you can see on the left, this is the first screen you encounter when you launch the app. It’s almost as though it’s trying to be a social network first-and-foremost, but if you have no intention of following other users and simply want to use it as a personal tracking app, you’ll just be greeted with an almost-blank screen every time you load it, which isn’t terribly engaging.

And which button do you press to actually start an activity? I always forget whenever I start using Strava on Android, but it’s the one that defaults to ‘Feed’ at the top, which isn’t that obvious. 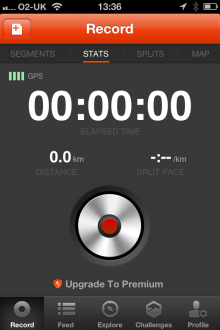 However, the iPhone version of Strava is a different kettle of fish compared to Android. It really is a joy to use, and design-wise it feels like a different app to the Android version. For example, the second you launch the iPhone version you’re straight into the main ‘Record’ screen and you’re good to go, with swipes taking you to segments, splits and map view.

Both Android and iOS versions of Strava let you easily create an activity from scratch which is great, but you can’t open your music from within the app which is a minor downside. But there are neat ‘challenges’ you can embark on which helps gamify your workouts, including ‘How many kilometers can you run this August’?

The premium version of Strava will set you back $6 a month or $59 a year, and gives you additional benefits such as letting you compare segments in real-time, and see which friends are out on the road already.

Nike has set out its stall to ‘own’ the fitness space, and it’s done a pretty impressive job of it, what with its own ‘Nike Fuel’ metric and Fuelbands.

Moreover, Nike+ Running has become one of the most popular apps for runners, and it’s easy to see why.

It’s beautifully designed, very easy to use and doesn’t offer too much in terms of bells-and-whistles. The second you launch the app, you’ll see a synopsis of previous stats, and you can get going by tapping the screen once.

A small downside is you can’t hand-pick music from your device – you can either shuffle your whole library, or choose from a playlist. It’s not a massive deal-breaker given how easy it is to set-up a playlist, but it would be good to be able to choose an album, song or artist from within Nike+ Running.

There is one more downside – the inability to manually enter runs. Once a run is over it will let you ‘calibrate’ the session to detail the true distance traversed (GPS can be a little wonky), but you can’t retrospectively include a run.

Last, but definitely not least, is Endomondo, which wins plaudits for its uber-clean and neat design.

There’s something about the interface that just feels very uncluttered, even though it’s packed with information. A giant ‘Play’ button kicks things off, while you can view your history which includes an overview of the basic stats, as well as splits. You can also open any music on your device – and from Spotify – directly from within the app.

The basic version of Endomondo is free, but $2.99 a month or $19.99 a year lets you remove the ads and get a slew of additional features, including motivational back-slaps.

If you’ve tried all the GPS fitness-tracking apps out there and you’re really not all that excited about them – or, indeed, if you’re looking for something a little different – you should sure as hell check out Zombies, Run!.

Zombies, Run! started as a Kickstarter project in 2011 before making it into app form in 2012 for iOS devices, followed by Android. The premise? Put simply, you keep fit by running away from zombies.

The player takes the role of a zombie apocalypse survivor who carries out missions to gather supplies, with the drama playing out in fully scripted audio.

The game rewards success in missions by giving the player access to further segments of the unfolding story – and all this takes place in the real world, with the user physically running as they hear the zombie noises get closer. A bonkers but brilliant idea.