Real-time media sharing app DabKick has branched out beyond its one-on-one focus with the addition of public “DabKick Rooms” for consuming content with other users.

The service will start off with a single curated room that will play free content around the clock. In the future, DabKick envisions adding specific rooms for celebrities and artists to interact with their fans. It also hopes to work with content distributors, such as Comcast, on rooms that would require logins to view TV content.

DabKick also said it will soon introduce private rooms that users can create to watch videos and share photos. The company is also planning to release an Android version in the near future. 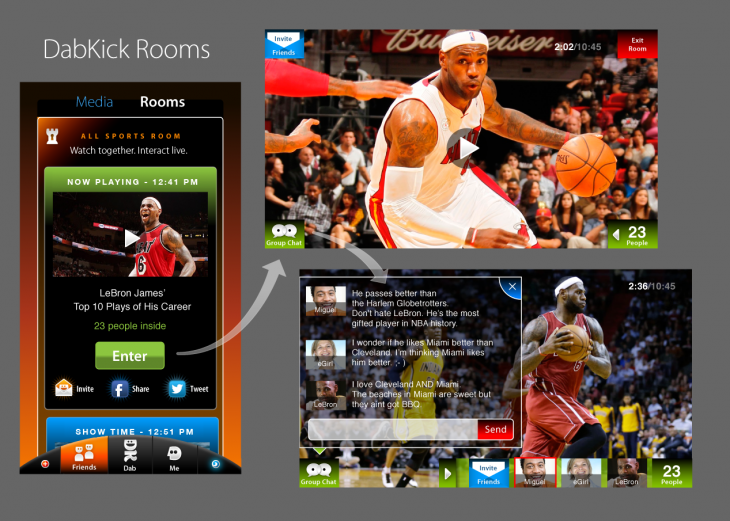 Founder and CEO Balaji Krishnan created DabKick because he felt that mobile devices lacked the personal experience of looking at photos and watching videos together with friends. While Skype, FaceTime and Google Hangouts have advanced the act of direct voice and video calls, Krishnan has been working on a third dimension he calls “media calls.”

DabKick uses of patented method of switching between socket P2P and HTTP connections in order to enable real-time media sharing between devices. Both sides have control over the shared view, so they can swipe back and forth between photos at will.

Since launching in beta in late 2012 with photo support, DabKick has gradually added new types of content, including music and YouTube videos.

With the arrival of public rooms, DabKick dabbles in a space that startups like Chill and Turntable.fm have tried and failed in. For his part, Krishnan believes his app can succeed because it is mobile and doesn’t require that everyone create content.