April was a busy month in Latin America, particularly in Brazil, where companies have been in a rush to get things done before the FIFA World Cup. Here’s the news you don’t want to miss:

Chinese tech giant Huawei has moved its Latin American headquarters from Brazil to Argentina, where it already had offices, InfoTechnology reported. The move will reportedly cost $20 million and generate 200 additional jobs in Argentina.

Samsung is launching a new project called Ocean Brasil, Brazilian media outlet Tela Viva News reported. It consists of physical training centers for developers, the first one of which will be located in São Paulo, followed by a new branch in Manaus in the second half of 2014. These will be the company’s first training units outside of South Korea. Both will host courses to teach students, developers and wannabes how to code for Samsung mobile devices and TV sets. The company also plans to bring its Developer Day to São Paulo for the first time in the coming months.

Intel is putting an end to some of its operations in Costa Rica and eliminating 1,500 jobs, Reuters reported. A spokesman explained that the chipmaker would move assembly and testing tasks to existing sites in China, Malaysia and Vietnam. 1,000 employees remaining in Costa Rica will focus on engineering, finance, HR and R&D. The chipmaker also expects to add another 200 “high-value positions” in the country later this year, although it is still reducing its workforce on a global level in an attempt to cut costs.

Google plans to use the .soy TLD (“I am” in Spanish) to target the US Hispanic market, a Google executive disclosed during a panel discussion at the Hispanicize 2014 conference in Miami last month. According to the Miami Herald, the domain “will be targeted at bilingual, bi-cultural Hispanics, and will have content in both Spanish and English.” 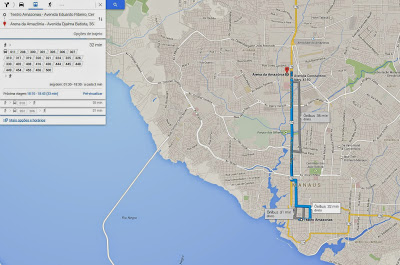 The company is also rolling out its Google Transit service into 6 additional Brazilian cities ahead of the FIFA World Cup: Salvador, Brasilia, Manaus, Recife, Natal and Cuiabá. The transportation planning layer is now available within Google Maps for 22 Brazilian locations, including the big event’s 12 host cities.

The state of São Paulo will join forces with Microsoft and invest R$9.7 million ($4.3 million USD) to develop a crime data aggregation and analysis platform called Detecta, ZDNet reported. The technology behind Detecta has been in place in New York City since 2012, but it will be the first time it will be used outside of the Big Apple.

Brazil is one of the four countries in which Twitter is rolling out its TV conversation targeting’ tool, alongside Canada, France and Spain. This service allows networks and brands to target viewers with Promoted Tweets and comes on time for the FIFA World Cup in the country. In addition, Twitter is beta testing the tool in Argentina, Australia, Germany, Italy, Japan and Mexico, with more countries to follow.

Music video service Vevo launched its own services in Mexico, MusicWeek reported. The country was already driving the second largest number of views for Vevo videos on YouTube, a partnership that is set to continue. A few weeks ago, Vevo also released a redesigned iOS app in the 13 countries where it was already present: Australia, Brazil, Canada, France, Germany, Ireland, Italy, the Netherlands, New Zealand, Poland, Spain, the UK and the US.

Meanwhile, Spotify is reportedly having difficulties with its planned rollout in Brazil. According to Estadão’s tech blog, Link, it had to postpone its target launch date to May 20 due to problems with payment methods and delays in its negotiations with music labels. As we reported last month, beta testers testified that pretty much everything else seemed already in place for the big day, including translations, pricing and even local advertising.

Yelp’s reviews are now available in Mexico, following an earlier launch in Brazil, CNET reported. The company put most of its focus on building content for Mexico City. While it only has one Mexico-based employee, it also bought data from a third-party company and hired local temps to check info, take pictures and sometimes write reviews, CNET explained.

Square launched a point of sale and suite of business tools in Spanish and held a networking event for Miami-based small businesses, the Miami Herald reported. The mobile payments startup is hoping it will help enroll Latino sellers across the United States.

Chilean data journalism organization Poderopedia is branching out into Colombia and Venezuela with local partnerships, PulsoSocial reported. It will get local support from IPYS Venezuela, Transparencia Venezuela and Consejo de Redacción. As you may remember, Poderopedia won the Knight News Challenge in 2012 for its work on mapping connections between the political and business sectors (see our previous story).

Voice acting marketplace VoiceBunny is launching in Spanish, its founder Alex Torrenegra told Pulso Social. According to the Colombian entrepreneur, the startup plans to go global, and its expansion from the US into Latin America is only the first step.

Space Monkey announced that the manufacture of its personal cloud storage hardware would move from Shanghai, China to facilities in Guadalajara, Mexico. According to the CEO of the Utah-based company, Clint Gordon-­Carroll, “competitive pricing, simpler logistics, quality labor, and reduced shipping costs all combine to make this choice a no brainer.” Its new ties to Mexico don’t stop there: it also announced a new round of funding led by Monterrey-based fund Alta Ventures, which it expects “to accelerate adoption of [its] service in Latin American markets and beyond.”

Bitcoin vault and wallet company Xapo announced the upcoming release of a MasterCard debit card connected to its users’ wallet for online and offline spending. As we reported, Xapo is the latest venture of Argentine serial entrepreneur Wences Casares. It raised a $20 million round led by Benchmark, with Fortress Investment Group and Ribbit Capital also partipating.

French designer Philippe Starck and a collective of artists launched TOG, a platform for customizable, 3D printed furniture. The first TOG physical store is scheduled to open in São Paulo in a few months. As for the Web platform, it is reportedly set to become more open-source in the future, with users uploading and sharing their own designs.

Uruguayan mobile payments startup Micropagos was acquired by mobile services player IN Switch Solutions. The buying company is headquartered in Florida but has strong ties to Montevideo, where its development and support center is located.

Brazilian VC firm Ideiasnet sold its majority stake in iMusica to mobile carrier Claro, which will now have full control of this digital music distribution service. Based on security filing, this transaction values the company at R$49.1 million, around $22 million USD.

Brazilian IT solutions firm Stefanini acquired an undisclosed but significant stake in Datastorm, a newly launched venture that will offer tailored big data analytics to Latin American companies across a wide range of sectors, from telecom to finance. While numbers remain confidential, Datastorm’s CEO Leandro Faria described the deal as the equivalent of “skipping seed round and series A.” In practical terms, Datastorm will operate under its own brand and with separate operations in Belo Horizonte, Minas Gerais. Still, it expects to benefit from the distribution network and expertise of its corporate partner, which controls two seats in Datastorm’s board.

Spanish Uber-like service Cabify raised a $8 million series A round, TechCrunch reported. It will use this new funding to accelerate its growth in Latin America.

Mexican car-sharing service Carrot.mx raised a $2 million series B round, TechCrunch reported. The round was led by Venture Partners, with participation from previous backers Auria Capital and Mexico Ventures. As you may remember, Carrot was one of TNW Conference Latin America’s Startup Battle’s finalists last August. This new round brings its total funding to $3.5 million.

Alta Ventures invested $1 million in the EyeDetect technology to finance its commercialization. Developed by 5 scientists from the University of Utah, it is reportedly capable of detecting 16 reaction types thanks to an infrared camera that monitors eye movements.

German holding Project A Ventures invested R$800k ($360k USD) in SaaS logistics solution Intelipost. Project A has been acting both as a fund and as a company builder in Brazil, and Intelipost is led by one of its former employees.

Latino-focused acceleration program Manos Accelerator launched a call for applications for its second edition; as you may recall its first batch graduated last September. In addition, it also announced that it had extended its partnership with Google for the next two years.

The Government of the City of Buenos Aires is putting a program in place to invest in startups, in partnership with 5 accelerators it will soon start to shortlist. According to Apertura, the accelerators will be in charge of deciding which teams should receive funding as part of Buenos Aires Emprende.

Brazilian accelerator Aceleratech is set to receive funding from Acelera Partners, a new entity and accelerator network created by AgeRio, Banco Espírito Santo’s arm BESAF, Microsoft Ventures and Qualcomm. Aceleratech is one of Start-Up Brasil’s partner accelerators and is currently accepting applications for its fourth batch. In its first phase, the partnership will indirectly provide financing to 50 early-stage companies. In addition, Acelera Partners may make follow-on investments in its favorite teams.

Argentine accelerator NXTP Labs announced the list of 25 startups that joined its sixth batch (disclosure: my startup MonoLibre is one of them). In addition, it expanded beyond Buenos Aires, Montevideo and San Francisco with the launch of local operations in Chile, managed by Argentine serial entrepreneur Tiburcio de la Cárcova. The new fund will dedicate $15 million to early-stage startups, thanks to support from the Chilean Economic Development Agency (CORFO).

Hardware-focused accelerator HardTech Labs welcomed its “class zero” of four startups, three based in the US and one in Mexico. According to Fox Business, its goal is to connect San Diego’s tech culture with Tijuana’s manufacturing skills.

Mexican corporate accelerator naranya*LABS selected 9 startups to participate in its next batch. They come from Argentina, Mexico, Brazil, Chile and Guatemala, and will move to Monterrey to join the four-month program.

USAID publicly denied several elements from earlier AP reports alleging that the agency had secretly created a social media platform dubbed “Cuban Twitter” to foster unrest on the island. However, it confirmed that it had funded the microblogging platform, called ZunZuneo, whose operations were based in Costa Rica. According to USAID, the platform had around 68,000 users at its peak.

São Paulo welcomed two-day global conference NETmundial, which saw governments, NGOs and entities from all around the world debate Internet governance. Unfortunately, its final statement was criticized by Internet activists, among other things for its vagueness on net neutrality and mass surveillance.

The highlight of the event came from Brazil itself, with President Dilma Rousseff putting her final signature to the country’s landmark bill on Internet, known as Marco Civil, which covers principles such as net neutrality, freedom of expression and right to privacy. After four years of negotiation, the project had received the green light from Brazil’s Chamber of Deputies last March, followed by the Senate’s approval last month.