If you attended SXSW, you may have bumped into Poderopedia and its founder, Miguel Paz. Poderopedia won the prestigious Knight News Challenge in 2011, and aims to become “the who’s who of business and politics in Chile,” its home country.

While data journalism is a global trend, Poderopedia’s project is particularly relevant in Chile, where business and politics are closely connected, and the elite often criticized (see also a foreign investor’s take on the country).

Miguel Paz knows this very well; as a career journalist, his topics of predilection were business, politics and “power” (‘poder’, in Spanish). Here’s his view of Poderopedia’s raison d’être:

“We need reliable information on the elite and its connections here in Chile. We are in a country where social mobility is limited, the same last names show up again and again in many sectors, and conflicts of interest are numerous. This makes Poderopedia a project of public interest.”

A few days ago, Paz finally left his deputy director role at the Chilean newspaper El Mostrador, with the feeling that he had to focus full-time on Poderopedia to make sure it becomes a reality very soon. 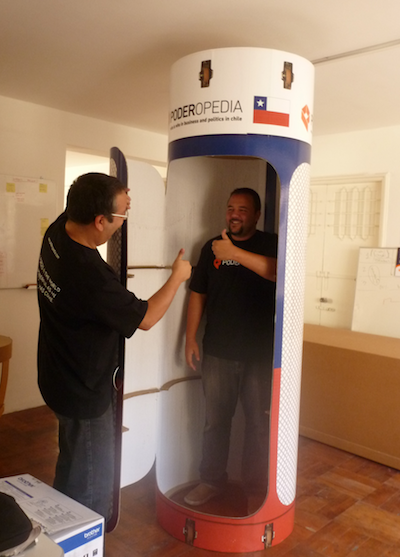 At the moment, the site itself is still a project, but Paz has already enrolled four people to get it off the ground – he is aiming for a private alpha launch in May, with a beta launch by November.

The composition of Poderopedia’s team is an interesting sign of the future of journalism; besides Paz and an investigation director, it also includes a developer, an information architect and an operations manager. It’s also growing, and the team hopes to add one or two journalists, a lead developer and some interns to its staff in the near future.

Paz acknowledges that the expectation building around Poderopedia is quite scary for him and his team; after all, they are only beginning to program the back end.

Yet, they have a pretty clear vision of what they want to achieve, and have been working on it since November. Although data visualization is in fashion, Poderopedia’s priority will be the data itself; its database will aggregate people, topics, companies and places, inter-connected with meta data.

The main challenge, Paz explains, is to decide how to structure, filter and update the semantic information, hopefully with a certain degree of automation. However, the base unit will be the individual, non-exhaustive and non-chronological summary, which will still have to be written by a journalist- at least for now. At some point, it could also use crowdsourcing, with karma points to determine the most authoritative contributors.

Once Poderopedia is ready, it could help the media and the public understand the connections between politicians, their interests and the decisions they make; its audience could include journalists, but also students, scolars, NGOs and anyone interested in this matter. While Paz acknowledges this isn’t entirely revolutionary, and also reminds of theyrule.net, it would be a first in Spanish.

Another interesting aspect of Poderopedia is its commitment for open source, a result of its participation in Knight News Challenge. According to Paz, this could make it a great base for others to develop similar initiatives on different verticals, such as Sports-pedia and so on.

Open source aside, Poderopedia is also working on monetizing the site thanks to a parallel project, Poderopedia Plug & Play, which is focused on external media outlets. At the moment, newspapers and traditional media don’t have money or time to conduct ambitious experiments such as Poderopedia. However, Paz thinks that once it is live and running, they could be interested in licensing it to run a customized version that would also let them ads.

Poderopedia is the first experiment of the Poderomedia Foundation, a separate structure with its own team. One of its plans is to offer training activities for journalists in Chile, and hopefully in other Latin American countries. “Journalists work in hard conditions in the region, and yet many are great at their jobs.” With training, Poderomedia could help them embrace technology, and further improve the quality of Latin American reporting. In other words, stay tuned for Poderopedia and Poderomedia’s news.