Launched in the UK in 2004, 7digital’s download store and mobile applications give consumers access to over 18 million tracks across Europe and North America. The service finally launched in the US back in 2009, and just before Christmas we reported that 7digital was set to power T-Mobile’s Mobile Mall Stateside, giving US music fans access to tracks from the 4 major labels (Sony, Universal, Warner and EMI), as well as dozens of independent labels.

We’re told that 7digital now has over 2 million active users on mobile devices. We first reported that a Windows Phone app was en-route back in December, and with this latest addition to its app 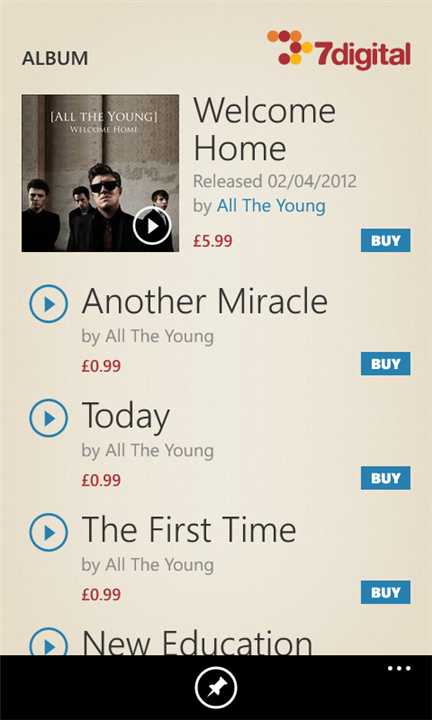 repertoire, Windows Phone users can now browse, preview, purchase and download music to direct to their handset. As with all 7digital’s apps, previously purchased music can be synced from a user’s personal 7digital cloud storage space to their Windows Phone and any other devices with a 7digital app installed.

The app takes advantage of the native OS, with recommendations and featured content appearing on a panorama style interface. Live Tiles have also been integrated to allow users to pin their favourite artists, tracks and albums to the start screen.

“The 7digital mobile applications allow our customers to access their music however, whenever and through whichever device platform they choose,” says Ben Drury, CEO 7digital. “The new 7digital Windows Phone application adds to our philosophy of being a truly platform agnostic digital music service. With the addition of the Windows Phone app, we enable music fans to purchase music and access their entire music collection on all their devices, anytime, anywhere.”

The 7digital Windows Phone application is available from the Windows Marketplace in a number of territories including UK, US, Canada, Germany, France, Spain Italy and Ireland.