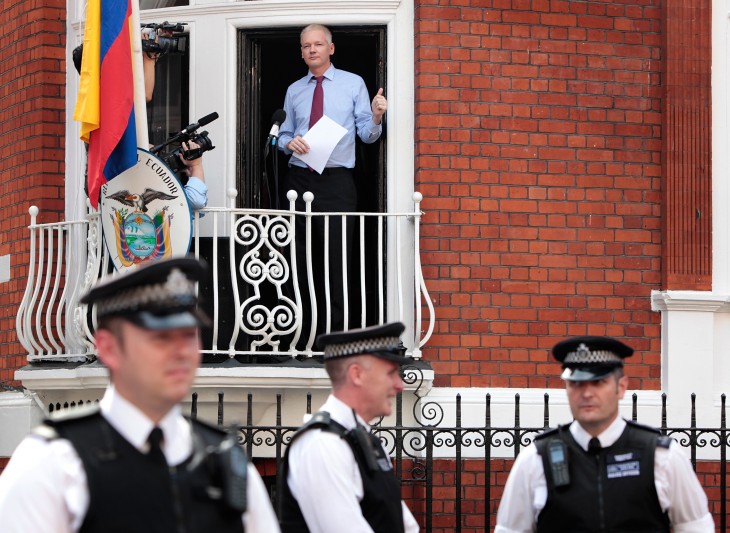 It was an ignoble end for WikiLeaks founder Julian Assange. After having spent almost seven years defiantly hiding in Ecuador’s London embassy, where he spread state secrets and bodily excretions alike, his tenancy was ended by several burly coppers who dragged him by into a waiting police van as he yelled incoherently about Gore Vidal.

The Met’s finest then took Assange, who at this point looked like the greasy lovechild of Rasputin and Saddam Hussein, to a Central London police station, where he was charged with breaking the terms of his bail. He was also told that the American government had issued an arrest warrant for him over alleged computer crimes.

We don’t know how the latter will develop. Assange will undoubtedly fight his extradition to the last possible point of appeal. It will be a long and tedious process. If I was a betting man, however, I’d put money on Assange eventually taking a trip to Disneyland. The US authorities are relentless in extradition proceedings. Like a dog with a bone, they simply won’t let go of their prize. A great example of this was Gary McKinnon, a relatively small-fry hacker, who spent over seven years fighting his extradition case.

McKinnon merely wanted to know if Uncle Sam was hiding UFOs. In the grand scheme of things, he didn’t do that much harm to the US government. Assange, on the other hand, was responsible for the biggest embarrassment to American national security since, I don’t know… Robert Hanssen? Perhaps even Julius and Ethel Rosenberg?

So, yeah. Assange will be extradited. It isn’t a matter of ‘if,’ but rather ‘when.’

But first, he’ll have to serve his time in the UK. As mentioned, British authorities promptly charged Assange with breaking his bail conditions, and he was found guilty on April 11. Ever theatrical, Assange loudly declared the proceedings “unlawful,” causing judge Michael Snow to brand him as a “narcissist who cannot get beyond his own selfish interests.”

And today, he was sentenced to 50 weeks imprisonment. That’s a steep penalty, especially considering the maximum sentence for this crime is one year in prison.

To be fair though, Assange deserves it. He deliberately placed himself beyond the reaches of the legal system. Not only did this cost the British taxpayer an immense sum of money (£16 million, by some estimates), but it also prevented two women with serious allegations against the WikiLeaks founder from having their day in court.

There has been no trial in Sweden. It’s not been proven if Assange robbed these women of their dignity. One thing is certain though: by hiding in the Ecuadorian embassy, he robbed them of justice.

So, is Julian Assange contrite at all? Not really. In the BBC, he’s quoted as saying “I did what I thought at the time was the best or perhaps the only thing that I could have done.”

“I apologize unreservedly to those who consider that I have disrespected them by the way I have pursued my case. This is not what I wanted or intended,” he said, adding that he’d been struggling with “difficult circumstances.”

As contrition goes, it’s just one stop away from “I’m sorry you’re upset.” But the fact is, Assange does have a lot of people to say sorry to.

The two women in Sweden, who will probably never know the vindication of hearing a guilty verdict? Yeah, they deserve an apology. The British taxpayers who wasted £16 million over seven years trying to arrest an antipodean narcissist? Them too.

Assange could have walked out of the Ecuadorian Embassy at any point in the past seven years with his head held high, ready to admit his error and accept justice. Instead, he had to be dragged out.

But perhaps most of all, Assange owes a massive, groveling apology to those who believed in him. In particular, he should apologize to those who fronted his bail money back in 2010, and who were forced to forfeit vast sums of money when he, like the sniveling coward he is, fled to the Ecuadorian Embassy.

Although many of Assange’s backers were public figures in some form, they were by no means rich. Professor Tricia David, an academic with expertise in education theory, pledged £20,000 as a surety to the court. She ultimately was forced to forfeit £10,000.

Professor David is a pensioner, and this sum represented a significant chunk of the life savings she’d built with her husband.

Julian Assange will have a long time to think about what he’s done. And I’m not talking about the aforementioned 50-week sentence. Extradition proceedings, if fought, can drag on longer than a Peter Jackson film marathon.

Let’s look specifically at computer crimes, for that’s what Assange has (so far) been charged with. Lauri Love was first indicted in 2013. He won his final appeal against extradition in 2018. Extradition proceedings against Gary McKinnon commenced in 2015. He won his case in 2012, after then-Home Secretary Theresa May blocked the extradition process.

In both of the examples cited, the defendants used every single avenue of appeal available to them. You can bet Assange will do the same. And he’ll almost certainly fight his case from prison while on remand, as no court is likely to offer him bail, given his previous record for non-compliance.

I don’t want to diminish the work of Wikileaks. In its early years, it spoke truth to power and held institutions to account. It shone a light on the corrupt dealings of dictators. From secretive private banks to far-right political parties, entertainment conglomerates to superpowers, WikiLeaks pulled no punches. Its death knell was that, in the end, the organization became inseparable from Julian Assange the person.

Assange was WikiLeaks’ sole recognizable face. He held an almost autocratic sway over the organization. In the end, he cost it its reputation for impartiality, colluding with Donald Trump Jr (and, quite possibly, the Russian government) to help his father clinch the US presidency. Its official Twitter account helped proliferate baseless conspiracy theories, like that murdered DNC staffer Seth Rich was the source of the Podesta leaks.

Assange would like to think of himself as a quixotic advocate for justice. Someone who fought a principled battle against an adversary, no matter the personal cost. And perhaps, at one point, that was true.

Not now. Rather than a knight in shining armor, Assange is regarded by many as someone with an almost legendary contempt for the rule of law. A hypocrite who tirelessly exposed those acting outside of the law, while simultaneously spending seven years hiding in a cupboard (or was it a basement?) in order to avoid justice.

He only has himself to blame.