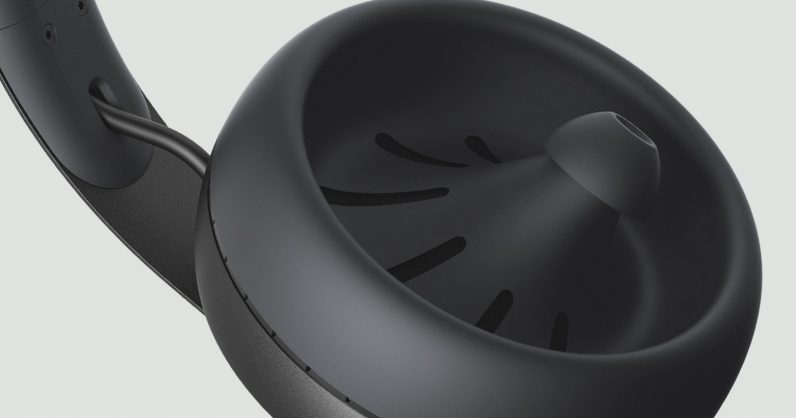 It used to be that buying good headphones meant finding a pair that represented a sound you like. Some headphones are neutral, some emphasize the midrange, others the bass. Finding your perfect match was about as easy as meeting your soulmate.

A recent audio fad has started to change this mentality: headphones that can be tuned to your specific hearing profile have hit the market left and right, claiming to go beyond what you could do with a simple equalizer.

The Nuraphone – a $400 Bluetooth headset – are the best execution of that idea I’ve heard yet. But in achieving that quality, they’re also probably the weirdest headphones I’ve ever used.

You’ve definitely never seen headphones like them. The black aluminum design is fairly understated from the outside, but look inside the earcups and their franken-hybrid nature appears. There are the silicone earcups on the outside, which morph into protrusions that look like in-ear monitors, but actually rest on the outside of your ear canal like a pair of AirPods.

At first glance, the contraption looks somewhat ridiculous and likely uncomfortable, but the experience is surprisingly cozy. The earbud parts of the headphones are attached to a spring-like material that exerts just enough pressure to stay in place without causing discomfort, even while moving.

It’s certainly a weird sensation for the first hour or so, but I got used to it real fast. My ears could get a bit sore after several hours of music, but not worse than most earbuds I’ve used.

There are two main benefits for the weird design. First, the double layers help passively isolate sound extremely well, better than many active systems. When music is playing, it’s hard to hear anything else.

The second benefit is separating the bass speaker from the high frequency driver in the earbud portion. That allows you to pump up the bass to head shaking quantities with virtually zero degradation to the rest of the frequency range. I’ll return to this in a bit.

The Nuraphone’s cleverest trick is how it measures your hearing ability. Every other such headphone I’ve tested simply ask you to listen to a series of tones at varying frequencies and volumes, and then press a button when you can hear the sound. This works decently, but it’s like getting a hearing test with your doctor. I often found myself repeating these tests to make sure I did them right, and sometimes got wildly different results.

The Nuraphone could hardly make the process simpler. Using the magical powers of ~science~, the headphones instead automatically tune themselves to your ears in 60 seconds upon initial setup. No work is required on your end, and I found the results to be remarkably consistent with multiple tests.

Here’s the TL;DR: The headphones send a signal into your ear canal, after which your auditory system actually sends a sound back out – in a sense, the ‘leftover’ sounds your ear didn’t absorb.

These incredibly faint returning sounds thus contain information on how well you heard the original signal, and the Nuraphone uses this information to tune its sound. The headphones can carry up to three user profiles at once, by the way, but listening to another user’s profile (or turning tuning off altogether) leads to far inferior sound.

All this translates into a remarkably good listening experience. When I do audio reviews, I usually spend something like five paragraphs trying to describe the sound for curious readers. I could talk about the sparkling treble, impactful bass, or the exquisitely textured midrange, but it doesn’t really matter here. The Nuraphone sounds just right for me, but for the most part I haven’t a clue what those qualities will be for you.

There are a few things to note though. I appreciated how the soundstage felt huge for closed headphones – even for some open-backed headphones. And an ‘immersion’ slider in the app allows them to throw out bass in almost laughable qualities at the maximum setting – the headphones will literally shake – but the separated bass driver means it never impedes on the midrange, and the tuning is careful enough to never sound disparate from the rest of the frequencies.

I’ve mostly praised the Nuraphone, but there are some caveats holding it back.

Still, these caveats are worth living with because they really do sound so good and block noise so well, and the 30-hour battery doesn’t hurt. While the Nuraphone certainly are the most resolving headphones I’ve ever heard – there are a ton of great headphones at $400 and over – I can say they’re among the most satisfying. Sometimes, a good match is more important than perfection.