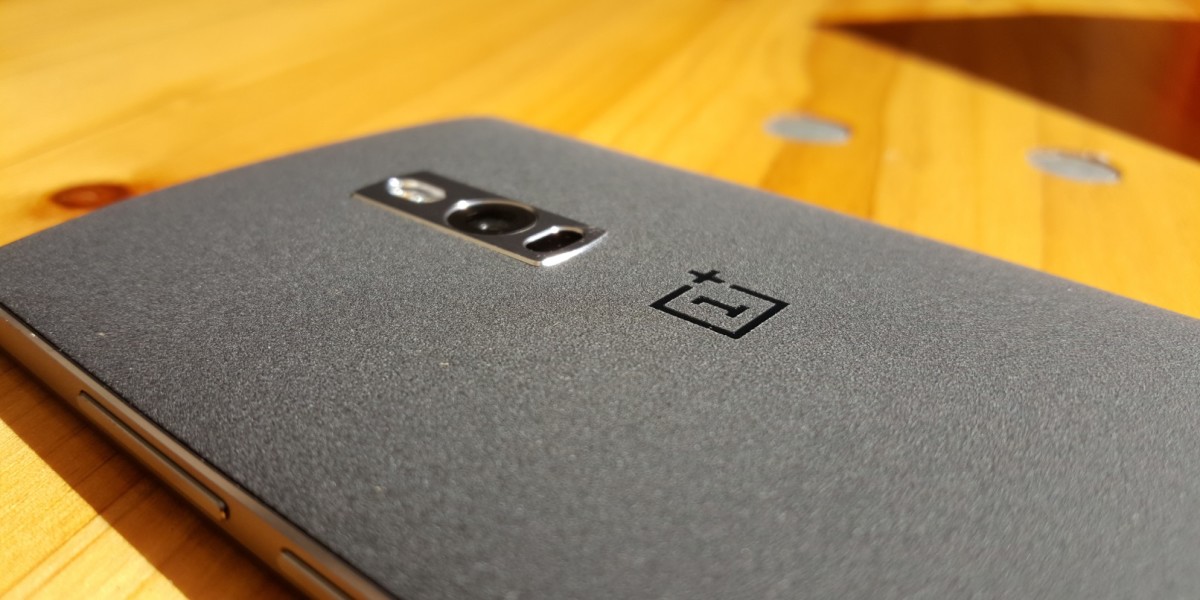 OnePlus’ approach to the smartphone market is to load a device up with the best specs it can for its intended price point, and then use some clever marketing to drive demand and control the flow of sales.

It seems to be an approach that’s working well, too, with demand for handsets often seeming to outstrip the supply, which is really the point of its invite system.

With a new model now available to buy – and high hopes to live up to – can the OnePlus 2 live up to the hype? We spent a little time with the device to bring you a quick hands-on ahead of our full review.

“Why on earth am I still holding a pummice stone?” That was my first thought.

The rear panel of the device is interchangeable, which is great, if you like an easy way to revitalize your phone in a relatively inexpensive way.

As was the case first time around, there’s a ‘Sandstone Black’ option, which is the one we looked at here. If you like the feel of fine sandpaper, or that pummice stone, then you’ll feel at home with this cover.

Given that there weren’t any others provided to test out, it’s hard to say whether the bamboo, Kevlar, ‘Black Apricot’ or the other options cause any less friction. This one, however, feels like an emery board on the back, but maybe you like that.

Despite keeping the same size display as the previous generation, the OnePlus 2 manages to keep the overall size of the handset down by making the bezels narrower. There’s also a larger battery (3,300mAh) this time around too, which makes the slimming trick even more impressive.

Despite this, it still feels like a bit of a slab – it’s not too large or wide to operate with one hand, but it still doesn’t convey the same sort of feeling of quality or ‘premium’ range placement that you’d get with something like the Samsung Galaxy S6 Edge, but then it doesn’t command the same sorts of prices either – in fact, the S6 Edge is more than twice as expensive.

The rest of the hardware specs – 5.5-inch full HD display, 4GB RAM and 64GB of onboard storage – however, mean that the OnePlus 2 can mostly be considered in the same breath as other manufacturer’s flagship models.

You get dual SIM slots as standard, too.

Without a chance to yet test anything too demanding, it’s hard to say how well it handles numerous demanding tasks at the same time, but on paper it shouldn’t have any reason to struggle, even with the fastest moving games.

I particularly like having a hardware switch on the side of the device to switch between ‘Priority Interruptions,’ ‘All Notifications,’ and ‘No Interruptions.’

Earlier in the year, OnePlus transitioned away from using the Cyanogenmod OS on its stock handsets (in most regions, at least) in favor of its own home grown Android fork.

The result, once you get through the set-up screens is a nearly ‘vanilla’ Android experience, albeit with a few custom tweaks.

Among these tweaks are things like the Shelf widget, found to the left of the main home screen. This shows the most used apps and contacts for quick access.

There’s also support for things like double-tapping the screen to wake the device, a bit like on LG’s G3 and G4 devices. You can also choose whether you want to use on-screen software buttons or the hardware buttons as navigation too, which is a nice bit of flexibility that you rarely see.

Aside of that, as you can see from the screenshot of all the installed apps out of the box, the device is free from bloatware and offers a largely stock Android experience on the surface of it.

Look around the UI a little though, and you’ll find Oxygen OS flourishes, like quick switching between audio modes when you change the volume.

Worth all the fuss?

It’s hard to say how it will fare in the longer term.

At first pass though, it’s a compelling hardware package in a unique, if not all that ‘desirable’ shell.

It’s no slouch though, in testing so far, there was no lag in navigating the UI – although there was a very, very small delay between hitting the capture button and the photo being taken.

The speakers were a little on the tinny side too, though plenty loud enough.

So is it worth $389? It’s hard to think, going on hardware alone, that the OnePlus 2 isn’t worth a punt at $389 if you’re after high-end specs at decidedly mid-range prices. There’s an even cheaper $329 16GB model too.

However, if what you’re really after is a sleek handset that will impress your friends with its good looks, then that’s probably not the OnePlus 2.

With more time to test the battery life, camera and overall performance, be sure to check back in the near future for our full review of the OnePlus 2.

Read next: Snapchat has a mysterious new trophy case for achievements