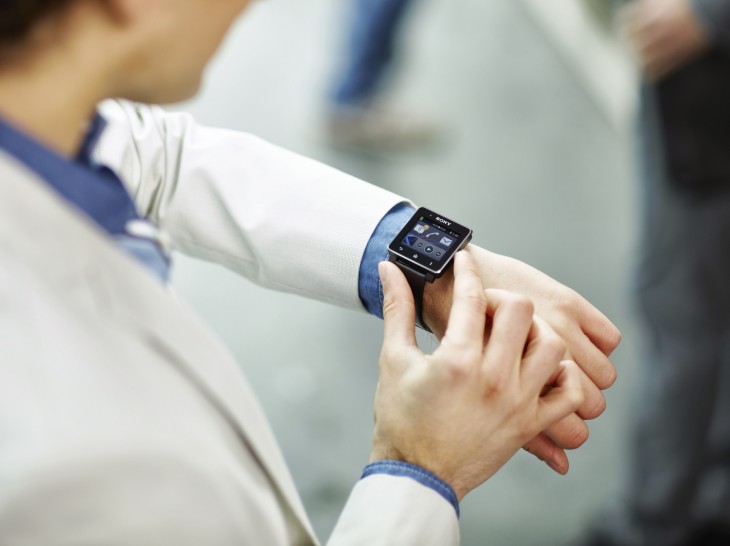 It was clear even as 2014 was kicking-off that this year would be ‘the year of the smartwatches‘ and indeed, the announcement of Google’s Android Wear platform cemented the fact that hardware makers will be pumping them out for some time to come.

Having spent time using a couple of different devices over the past year, my enthusiasm is waning. There are two sat on my desk, both with batteries drained, yet to be replenished for the umpteenth time.

The first I tried was the original Samsung Galaxy Gear, and at the time, I liked it. That didn’t stop me thinking it was pretty much useless, but I still didn’t want to take it off. Now, it’s never on there.

I don’t remember when, or why I stopped wearing the Gear, but the novelty wore off and it just never made it back onto my wrist. Taking it off to type, shower, do the dishes and everything else probably had something to do with it.

Still, the Gear being imperfect wasn’t enough to make me give up on smartwatches altogether, so when the latest crop of Android Wear-based devices was announced (think Moto 360, LG G Watch, Samsung Gear Live) I was excited to see what they would be like in real-life use. Given how frustrated I was at the limited functionality of the original Gear, the update was welcome.

Luckily for me, a few weeks back LG sent across a G Watch to try out. Dutifully and excitedly, I charged it and put it on. Months had passed and the new breed are based on an OS designed specifically for smartwatches.

I want less, not more

Like the lifecycle of most product categories, we’re still in a bit of an exploratory stage with smartwatches – they’re certainly not new, but they’ve also not gained widespread consumer adoption.

Generally, there are two different types: companion devices that connect to your phone to provide additional functionality and stand-alone phone replacement devices which are capable of messaging, calls and everything else that your phone can do, like the Omate TrueSmart.

Admittedly, I haven’t used a stand-alone smartwatch, only the companion type. However, I’ve used those enough to know that the screen is too small and the voice control not accurate enough to want to use one as an actual replacement for my phone. And I’m not sure why I’d wear a full smartphone on my wrist and then carry another in my pocket, which pretty much leaves a companion device as the only viable option.

I could list the many ways in which the two smartwatches mentioned fall short – but we’ve already reviewed them both and your opinion, requirements or general level of acceptability may be different. So, in short, they’re not useful enough and both suffer from the same problem: you’ll end up pulling your phone out anyway. Most of them are pretty ugly too, and slightly too chunky to be worn if sitting at a desk all day typing, but I’m no trend-setter and can put fashion concerns aside if the functionality is there. Try as I might, I just can’t believe the hype. 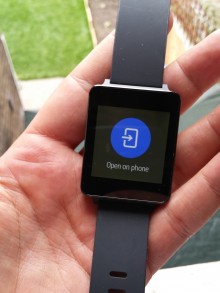 Yes, you can get notifications on your wrist, and yes, you can respond to them, sort of. In reality though, what tends to happen is that they alert you to things you need to look at on your phone. You see the notification, swipe for a little more info and then hit the button to open it on your phone, which you then have to pull out of your pocket anyway. And it doesn’t pop up like magic because, well, you’ve got a screen lock set, like a sensible person would.

So it becomes a filtration system – something to alert you to things that are pressing (and should be taken care of) and things that are trash. For me, when I see something that needs a response, I tend to respond, which means pulling my phone out and unlocking it – and if it’s trash, well I can ignore it. Seeing the notification appear on my wrist seconds before I reach for my phone isn’t adding much value, and if it’s a junk email I could have ignored, it’s simply another pointless interruption. Time really is precious if you’re constantly being bombarded.

After a couple of weeks of this process of checking notifications on my wrist, only to have to reach for the phone, I gave up. Ultimately, it became a distraction that took attention away from whatever I was doing – a criticism commonly levelled at smartphones already. In my own experience, this is compounding the problem, not helping it. If I’m at dinner with family or friends, I don’t really want constant updates. Yes, I could silence them, but then I could also just not bother wearing it too – and then why would I put it back on?

I think part of the problem for me lies in the confusion between promise and purpose – they’re imagined to be hi-tech devices of the future that can streamline our lives. In reality, they’re a slightly clunkier way of achieving everything you’re doing already. Their purpose for slightly more adventurous uses is also ill-defined. Metaio seems to think they’d be the perfect platform for augmented reality (AR), but I disagree.

Augmented reality’s problem, in general, is that it needs the device to get out of the way completely. Reaching for your phone to scan special content in magazines or anywhere else just isn’t natural, and often doesn’t provide enough of a reward to encourage repeat behaviour in the future. AR needs to be an interaction that isn’t impeded, or even initiated, in any way. It needs to take place effortlessly; that’s why wearable smartglasses are the better option right now, although they have their own hardware problems.

Putting AR experiences on a small-screened smartwatch where the user needs to explicitly initiate any interaction just doesn’t make sense to me.

Attopedia lets you look at Wikipedia on your wrist, but I’m yet to be convinced of the true value in that. Sure, it’s a novelty, but no, it’s not something I’d use regularly, if at all.

I’m not against a diverse range of uses and functionality, but it has to make sense and not just be for the sake of it.

The glimmer of hope

Of course, the other side of something like an Android Wear smartwatch is note-taking, activity tracking, reminders – things that you tend to initiate and that require some activity. These are great in theory, except that the voice control doesn’t quite work reliably enough and Google Now doesn’t offer enough functionality to be considered a true smart assistant.

Right now, I can ask it to navigate me to somewhere in central London (Kings Cross, to be precise – it got it on the third attempt) and it’ll open the route on my phone, and pop-up a card on my wrist showing me how long it will take to drive there, along with the distance. This is of some use perhaps, except I’d still need my phone for useful directions and I rarely drive across town during the day. It should really know that already, I use Android every day.

Contextual information is king when it comes to wearables, and while things are getting better, Now is still restricted to simple tasks – ‘is it going to rain?’, ‘take a note’, ‘remind me to’. In fact, Now’s Reminder feature is probably the most useful one there, simply because it doesn’t require you to reach for your phone at any point.

This is where the commercial success or failure of smartwatches lies though – without a truly smart assistant, smartwatches remain relatively dumb second screens.

Microsoft’s Cortana assistant impressed me recently, and recent rumors suggest the company could be looking to dip a toe into the waters, so maybe there will be another alternative to take a look at eventually. Then of course there’s the mythical iWatch or whatever Apple does eventually launch; it’s hard to imagine Apple remaining the notable elephant in the room when it comes to wearables.

To be clear, I’m not suggesting that the current smartwatches don’t perform as promised – they do, and for some people that will be enough. For some people, being able to count steps or filter emails will be worthwhile, it just didn’t ever naturally fit into my daily workflow or become part of any routine. Nor did taking photographs of my food to log calories, however much it might sound like a good idea for a split-second. Whatever the functionality, it was always a conscious decision to do it via the watch – to see if I could, rather than because it felt like a natural or particularly efficient way of doing it.

I’ve not given up all hope on smartwatches, but my enthusiasm is certainly ebbing away; I’m not lumping fitness trackers in the same bag either – I have a Jawbone UP that I’d still be wearing if I hadn’t lost the proprietary charger.

In this regard, there is some similarity with smartwatches. Both the units I’ve tried have proprietary chargers just like the UP, and while it’s not the reason I don’t use them anymore, carrying around more cables than necessary (if you need to go away for a few days) is a bit of a pain. No one wants to have to take another specific charger just for a watch, and if the G Watch’s battery life is anything to judge by, you’ll need to recharge every few days. It really is a bit disappointing how quickly this becomes a chore, and if you forget, you’re left wearing a hunk of metal and plastic that can’t even tell the time. Add in the already limited functionality and the conclusion of ‘why bother?’ is hard to escape.

I’d happily put a smartwatch back on my wrist, all I need is a compelling reason.

Read next: The FCC may reclassify US broadband as 10 Mbps and up