Augmented reality company Blippar is on a mission to be the bridge between the physical and digital worlds. Today, the company took another step on that mission as it company showed off an early build of its augmented reality games running on Google Glass for the first time.

When Glass was first introduced, Google spent a lot of time talking about the convenience of its capabilities. Make a call. Take a picture. It’s simple.

While that’s unarguably true, what most people really want when they use Glass for the first time is the experience promised by the science fiction movies of their youth, they want interaction with the environment around them.

That’s pretty much the mission that Blippar is on. It wants everyday life to have an optional layer of information ready when you need it. That could be glancing at products to get additional information about them or helping you kill five minutes by chopping at virtual fruit and veg while you’re waiting at a bus stop.

Today’s demo was the latter, a Fruit Ninja-style game called Kung Food and an asteroid blaster that uses the ‘mouse’ button on the side of Glass as the blaster controller. Naturally, it’s tough to capture what playing a Glass game is like on camera but you can get an idea of what’s going on from the shots of Blippar’s founder and CEO Ambarish Mitra hacking away below. To play, all you need to do is fire up the Blippar Glass app and look at the poster for the game.

The mission is simple: You have three lives and have to slash at the food flying at you in three-dimensional space to stop it splatting your face. A key point being here that, because it’s on Glass, both your hands are free to play the game. 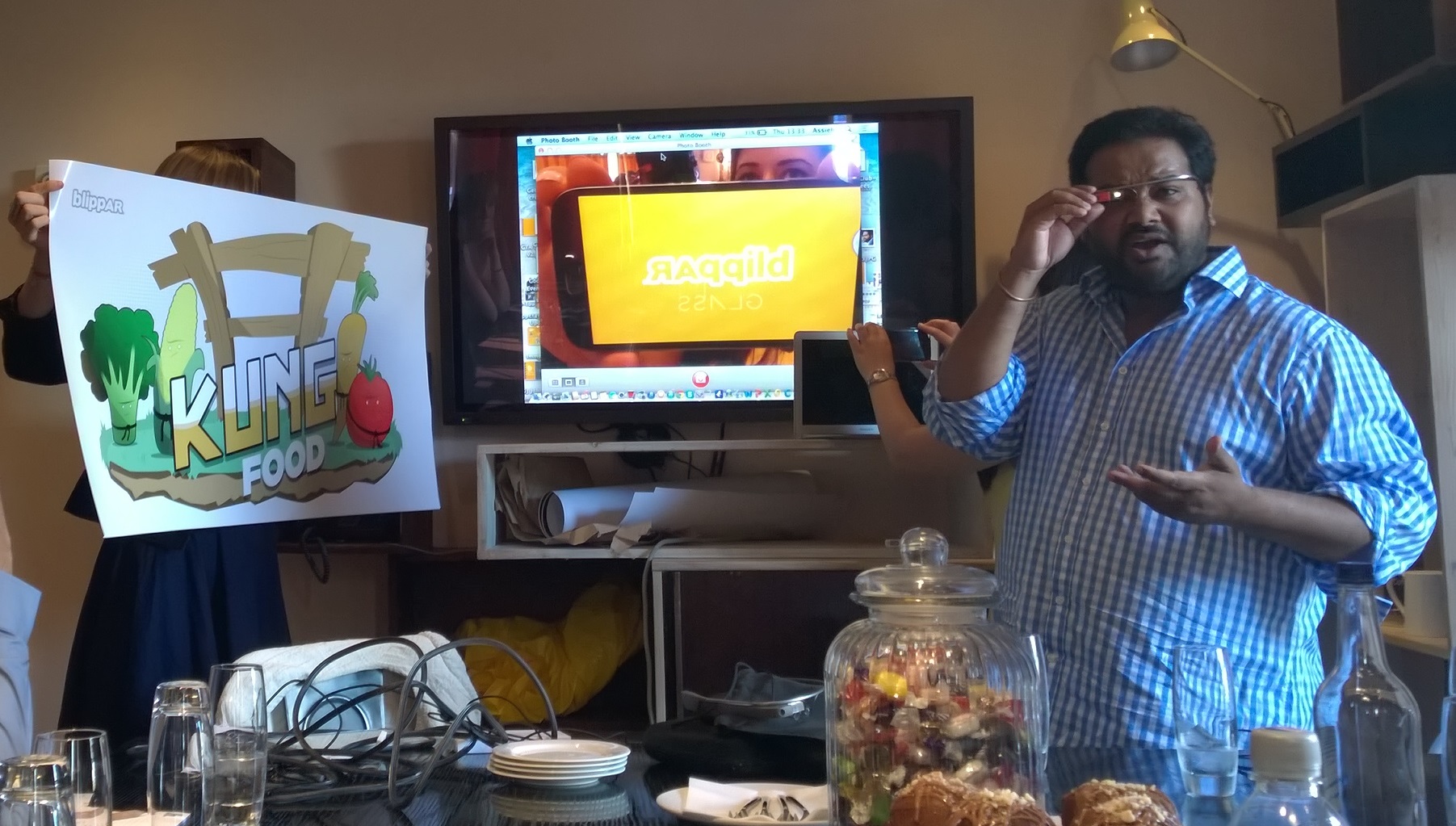 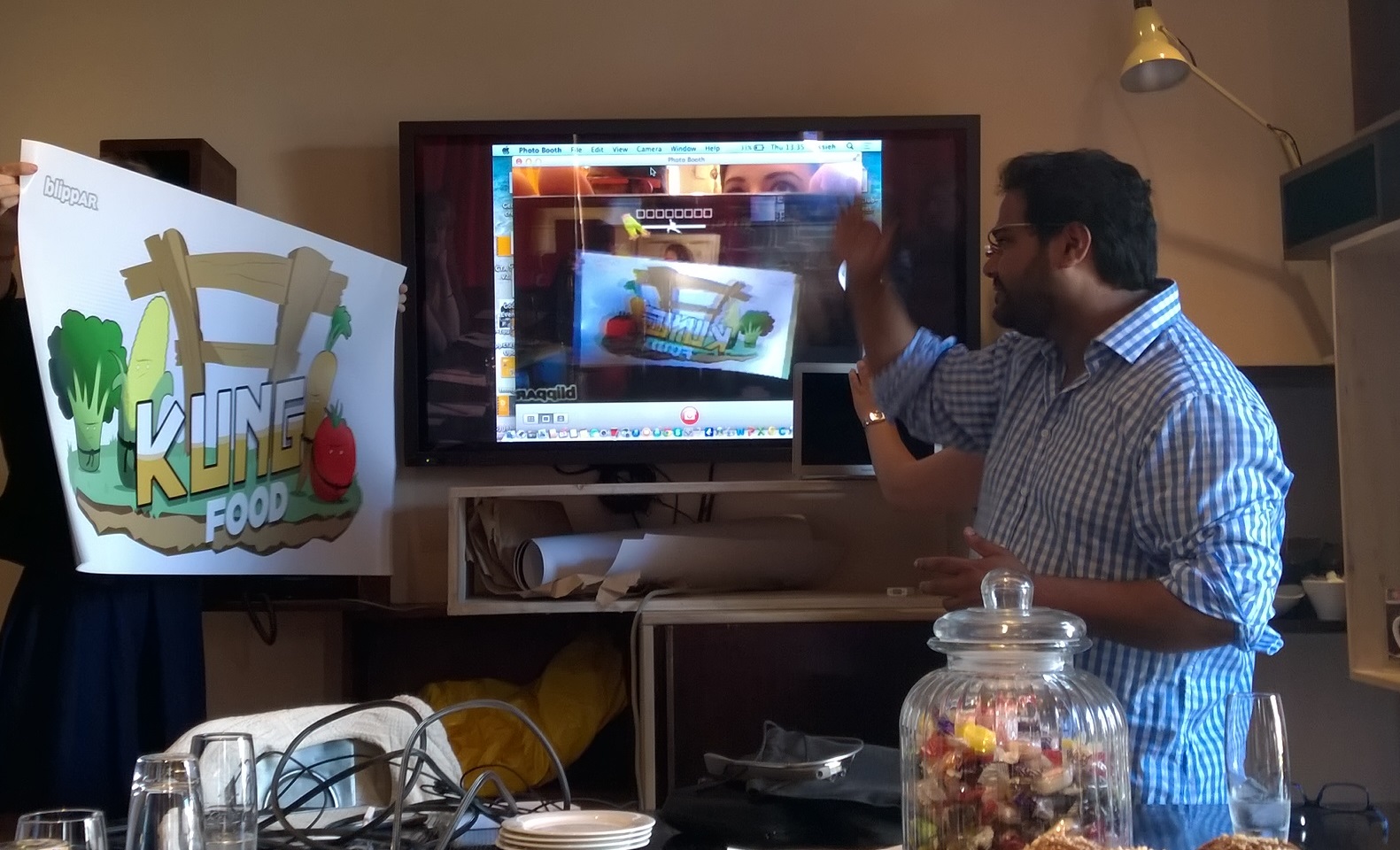 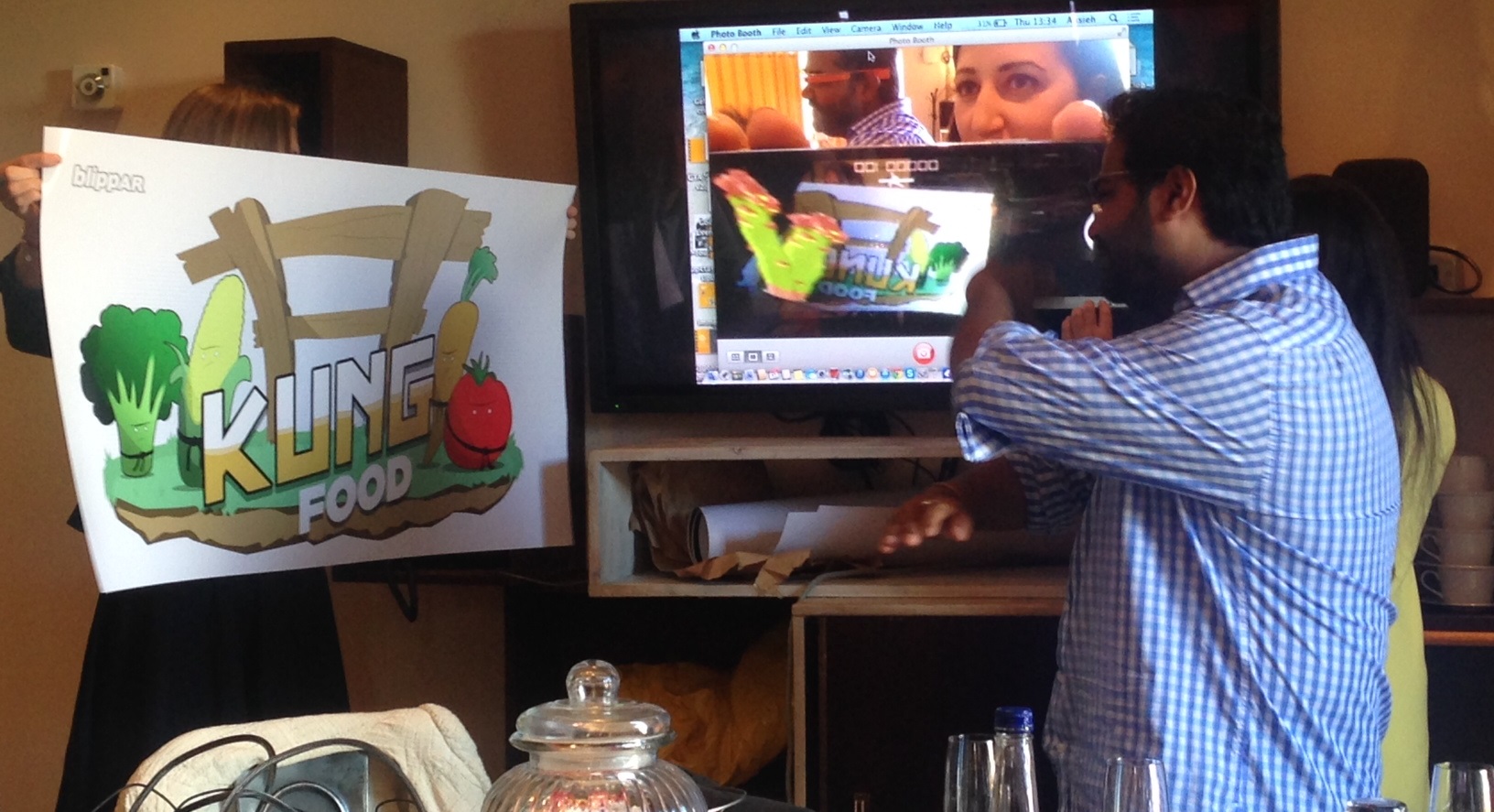 Clearly they’re simple games, but they illustrate the first steps of gesture interaction using Glass. Mitra described the technology as “in its infancy” but it’s easy enough to imagine a brand wanting to sponsor or build a game like Kung Food to be played at bus stops, train stations or anywhere else you’d normally find advertising.

It’s not the first time that Blippar has shown off its augmented reality app running on Glass – there was a brief on-stage demo back in February at Mobile World Congress – but it is the first time it’s been shown as a gaming platform, hinting at potential far beyond its current use of delivering brand-related content via its smartphone apps. There are, however, a few hurdles to cross before it realizes that future.

Glass might be one of the more exciting and highly visible, in every sense, pieces of technology to launch in the last few years, but the reality is that it’s not really that great in hardware terms. It’s not so much lacking the required processing power, it’s more the lack of stamina and overheating that’s the problem.

In our short test, the Glass unit overheated after just a few minutes of continuous use, but then, Glass isn’t really designed for continuous use. If it doesn’t overheat, you’d be doing well to get a 30 minute session out of them, particularly while playing something like Kung Food. Obviously, as a mainstream proposition, something that you wear on your face that overheats and can’t stand even an hour’s use isn’t that practical, but as a software company Blippar can adapt its technology to whatever future form-factors hardware companies create. That’s pretty much essential if you want to be “the eyes of the world”, Mitra explained.

Our ambition is to build a browser where you just look at things and you get spontaneous information, whether that’s some [sort of] utility or something entertaining… When we think of mobile we don’t define mobility and restrict it to your mobile device itself. Mobility is a lifestyle choice. We are mobile people and not just because we have a mobile phone in our hands. We need to make spontaneous decisions about the environment we are in or to know more about ourselves.

Increasingly, we’re seeing a trend of health bands coming out, and rings with chipsets, RFID devices, Glass-ware is coming out; it’s reality that in five years time this is going to be a very big part of our day-to-day lives and we very much believe in the future of wearables and have interesting ideas about how we want to become the default eyes of the world.

Mitra also talked about potential future interoperability between technology and services in a way that complements both parties. For example, using Blippar’s Glass app to automatically add food entries to your health band’s food tracker, which would make the process as simple as looking at your food.

What’s clear though is that the entire stack of technology around AR as it stands today isn’t quite ready for the future Blippar envisions. Of course, there are alternative Glass-like headsets, but the ones that offer better hardware are even more unappealing to look at, so we won’t be seeing those on everyone’s face any time soon.

Mitra’s not fazed by having to play the long game and has no intention of being acquired by the likes of Facebook or Google, he says. “We want to make acquisitions, not be acquired,” he told TNW.

The demo follows Blippar’s confirmation that it had snapped up its rival Layar last month. Although both companies do similar things, and both have their own Glass apps, no technology is being shared between the two at the moment.  The immediate plan is just to learn from what each set of teams is doing and share learnings. And slash at some virtual food, of course.