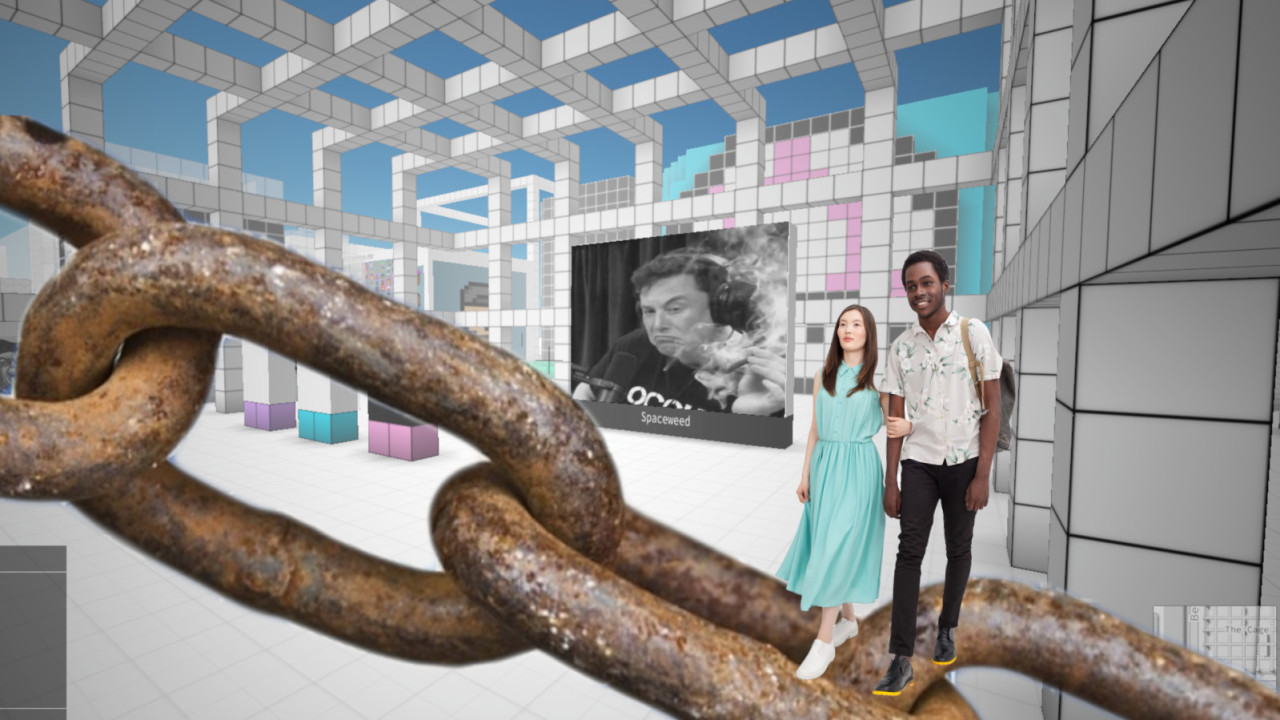 In fact, the project’s lead developer Ben Nolan told Hard Fork that’s where he got his inspiration. “I was inspired by Minecraft and loved the idea of a Minecraft city that is owned by its users,” he said.

Ruled by the Corporation

It’s not actually as dystopian as it sounds, though. The Corporation is actually the world’s developers, they mint the parcels and use the funds for future development, Nolan told Hard Fork.

“The corporation owns all the unminted land, and will always own the streets and some public infrastructure (like parks and public transport / metro system),” Nolan continued.

When a user has their parcel, they can get building on their plot of land, anything they build is owned by them.

Parcels are listed on crypto-collectibles marketplace OpenSea, and are priced from 0.248 Ethereum ($40 at the time of writing). If you eventually decide living in a predominantly white and gray virtual construct isn’t for you, you can sell your creation on OpenSea.

The world uses ERC721 tokens, similar to what Cryptokitties uses, to track the ownership of buildings and land. Strictly speaking, the world itself isn’t on the blockchain, but its land registry is, and that’s close enough for me.

Taking a walk on the blockchain

Cryptovoxels was launched a little under a year ago as a secret beta, the first land sales were made in June to the developer‘s friends. By July the world was opened to everyone.

According to Nolan, there are 711 parcels (buildings) held by numerous people. “The city has about 3,500 users [per] month, you’re more likely to run into people building in the Pacific Standard Time (PST) evenings,” Nolan told Hard Fork.

This explains why I was really lonely walking around in the virtual world, no one else was awake. On the other hand, it was quite serene.

You can teleport around the city from a building called “The Center.” Clicking one of the pink boxes takes you straight to where you want to go.

It’s by far the quickest way to get around, the map scales to over 30 kilometers from west to east, according to Nolan. So walking across it will take quite some time.

As you might expect, memes are pretty common, as are homages to the tech that started it all, Bitcoin. There’s also a lot of crypto-art to browse too.

Some entrepreneurial souls built “Bitcoin Hall,” a virtual museum to all things Bitcoin. It includes a mural of the abstract of the seminal white paper. There’s also what looks like a shrine to various Pepe memes. And of couse there’s a picture of Elon Musk smoking a blunt.

Someone even rebuilt the Parisian puzzle mural by Pascal Boyart which had $1,000 worth of Bitcoin hidden in it.

As with most games, there’s not a real need for Cryptovoxels. But walking around, beneath its eternal pale blue sky is a mildly interesting way to spend half an hour. You could even build something if you’re really in to it.