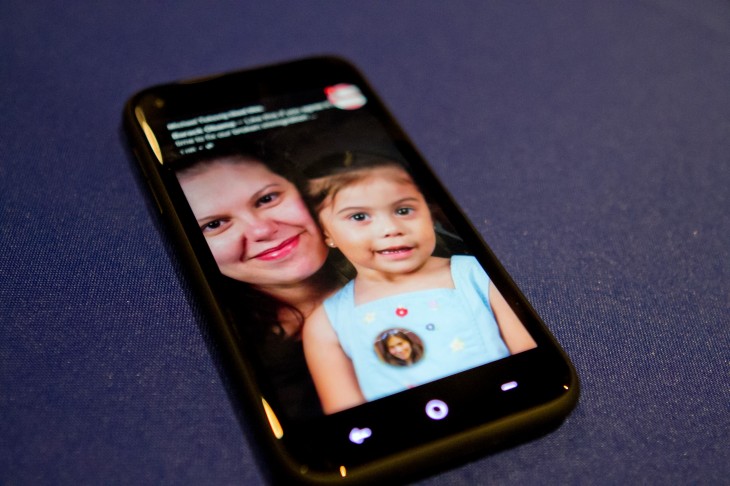 By now you know that Facebook has released its first-ever ‘Facebook phone’. Starting April 12, users can download the social network company’s new Android launcher software called ‘Home’ onto one of several Android devices to help make the experience more about the people instead of the apps.

We attended Facebook’s press event today at its Menlo Park headquarters and after a few minutes of reflection, two things come to mind: First, Home is pretty underwhelming — it did not seem to add any additional value to buying the phone compared to another Android phone without the service installed. Secondly, and perhaps this is the value that Facebook was hoping for, it provides the company with much more information than what it had access to before.

A coat of paint

Cover feed: With Home, people can immediately access your app content from their News Feed once they turn on their phone. We also make it easy for people to engage with your content as they can simply double tap to like a post and comment right from cover feed. At launch, Open Graph stories with user generated photos will be supported in cover feed. Click here for a complete list of the story types that cover feed supports now.

Notifications: People will receive bigger, bolder notifications from you right on their phone home screen. We’ve made improvements to notifications to make them more engaging and easier for people to interact with. It’s never been easier to reengage with people using your app.

Chat heads: We’ve optimized messaging so that people can seamlessly receive messages in a non-intrusive fashion while they’re using your apps. This will help improve engagement as it lets people jump in and out of conversations without ever having to leave your app.

App launcher: Home’s launcher makes it easy for people to get to your apps quickly. People choose what’s on their app launcher and it’s simple for them to get your app in there.

When we had a hands-on look at Facebook Home, it seemed, at least to me, that there needed to be something more to the service. All of the above features didn’t seem to be that compelling of a reason for someone to buy a Facebook phone. Perhaps they could have been integrated into Facebook’s SDK, allowing developers to leverage Home’s features instead.

During our trial run of the service, Facebook Home did not have any distinguishing apps in it that one couldn’t download themselves right on their Android device. And the number of standalone apps in Facebook’s arsenal is rather limited as it is — Poke, Messenger, Instagram, and the native Facebook app.

It’s great that the inaugural phone will be the HTC First — it’s aptly named because it is definitely the first one, but it could also be tailored towards the younger users who have been looking for their very first smartphone (yes, it does seem a bit far-fetched, but it is possible). But wait, you might be wondering whether a teenager or young adult would be inclined to buy the device and the answer is yes. It’s because of the fact it has the brand backing it.

People could be persuaded to purchase the phone because it’s the official Facebook Phone and will receive much more support than if you bought any other smartphone. Whether right or wrong, this could motivate people to buy it.

The HTC First appears to be an average Android smartphone on AT&T, but for a rather enticing price point: $99.99. It runs on 4G LTE, has a Qualcomm Snapdragon 400 processor with dual-core CPU, Android 4.1 (Jelly Bean) operating system, a 4.3-inch screen. There is a 5 megapixel rear-facing camera with an LED flash along with a 1.6 megapixel front-facing one. Oh and it comes in four colors.

But what’s the main selling point? It’s a Facebook phone.

The use of the HTC First as Facebook’s inaugural device almost reminds me of another company who tried to capture the mobile space for those addicted to the Internet, the Sony mylo. It was created by the company as a means of allowing people to stay connected through instant messaging, surfing the Web, and more. Now Facebook Home is not entirely like this, especially since the social networking company has partnered with multiple brands, including Orange, Samsung, Qualcomm, Huawei, Sony, Lenovo, and others. Perhaps one of those future phones will offer a more compelling reason to buy it.

GigaOm’s Om Malik penned a piece earlier today about Home in which he felt that it should put privacy advocates on alert as he says, it erodes any idea of privacy that we have. He wrote that if you install the software from the Google Play store, it’s very likely that Facebook will be able to track your every move and every little action.  For the most part, I understand and agree with his assessment.

What’s interesting is that prior to the release of Home, it probably didn’t surprise anyone that the social network knew quite a bit about who you are — the information was gleamed from your status updates, photos, videos, interactions with friends, games and apps that you used, and what you openly shared in your profile page. Eventually its knowledge of you is spread through the release of Facebook Connect. Before you knew it, relevant ads kept appearing when you visited the social network or a service, app. or site that utilized its technology. It’s already being done with Facebook’s launch of its off-site mobile ads last September.

Today, Facebook is furthering its information gathering by moving beyond the apps and the social networks that it controls by tapping straight into your phone. By having an Android launcher, Facebook is able to grab hold of data that you might not have known could be shared — theoretically it could take a glimpse into your Gmail account through the Google app (assuming it had the correct permissions, of course) and behave similarly to how Google currently scans people’s inboxes, or perhaps examine what you’re viewing on Flipboard, understand what sites you’re viewing through the default Android browser, or read your text messages sent outside its service, or more — although Facebook has said it will not track the phone’s GPS location.

Now, I’m not saying that Facebook is doing any of this, but there is great amount of treasure that can be mined from the data on someone’s phone. Today, Facebook CEO Mark Zuckerberg said that right now, Home does not display any ads on the device, but eventually they will appear on Cover Feed. It’s pretty reasonable to believe that by attaching itself to a core component of our mobile existence, Facebook is growing richer and smarter because it knows who we are, what we do, and what we like.

Update: On Friday, Facebook published information pertaining to how Home addresses user privacy, location, and other applications outside of the Facebook platform. Specifically, Facebook denies that Home will not collect information from non-Facebook applications and that the software can be turned off once installed. You can read the entire privacy statement here.

See also: If Facebook Home will track my every move and serve me targeted ads, sign me up now

Read next: With Google out of the picture, WebKit's open-source developers plan removal of Chromium code and references