Facebook today unveiled “Home,” a launcher for Android devices which will be available as a free download from the Google Play Store starting April 12. According to CEO Mark Zuckerberg, the Home launcher will help users turn their Android device into a social phone.

Home’s family of apps enables users to flip through stories, tap on content to Like it, and more. All the interactions are apparently “smooth,” with the feel of system software and not just a third-party app.

As soon as you turn on the phone, you see something called ‘Cover Feed’, a rich newsfeed which is almost reminiscent of Flipboard’s Top Stories item. Users will be able to view status updates overlaid atop images from their friends.

Instead of a phone designed around apps first, Facebook claims that this new system was designed around people. According to Zuckerberg, it feels different — rightly so. That said, Facebook’s Home also packs an ‘App Launcher‘ which shows you some of your most commonly used apps.

Messaging services on mobile phones traditionally operate as isolated apps, but Zuckerberg believes that Home’s messaging feature, curiously called ‘Chat Heads‘, gives users a more integrated and personalized experience. Facebook says that “you should be able to talk to your friends no matter where you are in your phone,” and not have to switch to a separate app.

When you receive a Chat Head, it pops you right over the content you’re viewing with a preview of the message and the sender’s photo. The company says that you can continue seamless conversations whenever you want to, and you can swipe to close the conversation when done.

With this experience, it wasn’t about what app or technology used to send the message, but that your friends are always with you. Chat Heads works with Facebook Messages and SMS.

Today it’s all about Android

According to Zuckerberg, Android is great because it’s open and you don’t need to fork it to handle the integrations. He went on to say that the home screen of your phone is essentially its soul, as it sets the tone of your whole experience. This is the catalyst for Facebook building a launcher and not forking the entire OS. 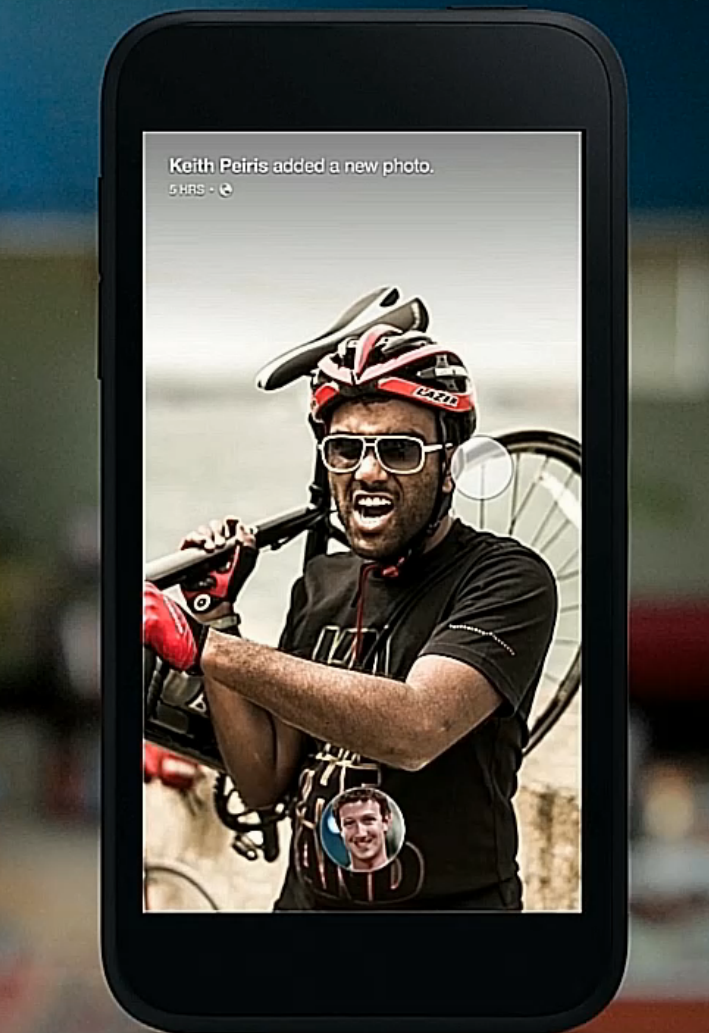 If you have the most recent Facebook and Messenger app installed on your Android phone, the company says that you’ll be prompted to install Home from the Google Play Store. Facebook does not expect Home to be ready for tablet devices for several months.

Facebook shared that it has support from quite a few companies, including AT&T, HTC, Orange, Samsung, EE, Qualcomm, Huawei, Sony, ZTE, Lenovo, Alcatel Onetouch. AT&T and HTC were highlighted in particular, as they’ve built some of the first phones to support ‘Home.’

Today, HTC is unveiling the HTC First, the first (pardon the pun) phone to be preloaded with Home. The phone will be available only on AT&T’s LTE network for $99.99 starting on April 12.

From rumor to truth

The announcement of a new mobile platform comes after much rumor and speculation. Today’s news comes just one week after the social networking company released word to the press about it’s “new home” on Android. Since that time, many people have discussed what Facebook would reveal.

Leaked photos of the device appeared on the Internet with Gizmodo saying that phone manufacturer HTC will be developing the first “Facebook phone”. It was also believed that the name of the phone will be the HTC First — obviously we know that to be true now.

With this new mobile tool in its arsenal, Facebook could be in a position to capture more attention by its users on mobile devices. In Q4 2012, the company announced that it for the first time, it had more users accessing its service from mobile than desktop. Zuckerberg has even said that more money is earned from mobile where its users have a 70 percent likelihood of using it.

We’re not going to build a phone. It’s not the right strategy for us to build one integrated system…Let’s say we sell 10 million units — that would be 1 percent of users. Who cares for us?

This wasn’t the first time that Zuckerberg has denied that Facebook would ever build a phone — last September at TechCrunch Disrupt in San Francisco, he said publicly that going the phone route would be the “wrong strategy” for the company.