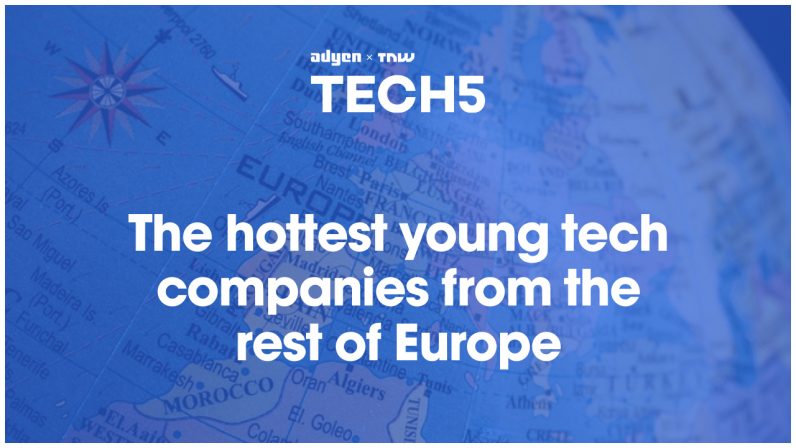 Together with payments tech company Adyen, we set out in search of the most promising new startups across Europe and Israel based on their performance, growth, and potential. If you’ve been following our series, you’ll see we’ve already covered the best in tech from major hubs including Belgium, France, Spain, Portugal, Italy, The Netherlands, Ireland, Norway, Denmark, Sweden, Estonia, Finland, Poland, UK, Israel, Germany, Austria, Switzerland, and Hungary.

The top-5 from each country will join the Tech5, a community of the hottest young tech companies in Europe and Israel. This year’s newcomers will then join us at the exclusive Founders Day (May 8) and TNW Conference (May 9-10) in Amsterdam.

Selecting the hottest scale-ups from up and coming tech hubs

While we did an in-depth look into each of these larger hubs, we didn’t want to miss out on the exciting new talent coming from other regions. While larger tech havens may produce the bulk of Europe’s hot new startups, micro tech hubs are popping up all over the continent.

Away from the fierce competition and familiar tech circles, startups from these environments enjoy competitive advantages based on their location (whether it’s being able to scale quickly at home, lower costs, closer-knit networking opportunities, and/or better access to local VCs and tech talent) and are producing some of the most innovative new ideas.

So today we highlight the top five hottest scale-ups from smaller up and coming tech hotspots across Europe. We did our research, consulted with our advisory consortium of 100 investors, influencers, entrepreneurs, and experts across Europe and selected the top five.

Find out who these hot young scale-ups are:

Ever wanted to take an uber to a foreign city? Imagine spending a lazy Sunday exploring a new location,  with door-to-door transportation service. Czech born company DayTrip specializes in private car trips from city to city. The way it works is you book a trip from one city to another, pick a departure time, and you can even add several sightseeing stops along the way! A certified driver from the platform will pick you up at the door, and bring you to your destination all in the comfort of their private car. Seems to me like it’s a nifty alternative to booking train or bus rides to get from one place to another.

Based in Latvia, Mintos is the fastest growing fintech company in the region and for good reason too! Founded in 2014, Mintos is a place where investors can safely move capital using innovative features such as Mintos’ Auto Invest strategies. The company has since raised €7 million in funding for further development of its marketplace. So far they’ve had 115,000 investors from 72 countries across the world invest a total of €1.8 billion. So what makes Mintos’ so special? It’s their ability to run such a smooth marketplace that allows investors to easily diversify their portfolios and earn high returns by investing in loans from 28 different countries.

Icelandic startup Authenteq is an automated identity verification and privacy platform which enables users to verify their identity and create their own sovereign digital IDs which are stored and encrypted on a blockchain. Not only is it easy to use, but it’s also extremely fast. Verifying your identity with Authenteq will take you less than 60 seconds (if you do not already have an Authenteq ID) and less than three seconds if you do. And even though the company is originally Icelandic, their technology can be used worldwide (in 190 countries to be exact).

For most of us, our pets are like our children. They’re probably the only ones that can safely wake us up for a walk at 7 am… and they know it. Our unconditional love for our pets has translated into a boom in the pet tech industry and Actijoy is at the very forefront of it. The Czech startup invented a smart collar which acts as a health and activity tracker for your pet. You can see your dog’s health vitals, physical activity as well as water and food intake on the Actijoy app, which is linked to their collar. Ever since its launch, the collar has been a hit, but the company isn’t stopping there. With their primary product being put in mass production as we speak, they’re already on to the next big thing; a smart water and food bowl, which will give you even more insight into your dog’s eating habits and health. However, Actijoy’s products are not only fun gadgets, if used correctly the company claims it can help prolong your pet’s life by two years.

If your favorite way to unwind on a Sunday is to hop on a boat and go fishing, we have the perfect device for you. Deeper is the world’s first wireless echo sounder compatible with iOS and Android devices. Using sonar technology it scans the water below and locates fish for you. Instead of spending hours waiting and hoping, up your game by using tech to track down a prime fishing spot. Since its founding, the company has been in the international spotlight; receiving the 2016 CES Best of Innovation, along with nine other notable awards. Their range of smart sonar devices are sold in more than 50 markets worldwide, enabling avid anglers from Sydney to Singapore, Michigan to Manchester to experience a completely new way of fishing. Deeper has also been recognized as the most successful young high-tech company in Lithuania.

This is part of a series selecting the hottest young tech companies from all over Europe. Every day we cover a new country. Check out the hottest young tech companies from Belgium, France, Spain, Portugal, Italy, The Netherlands, Ireland, Norway, Denmark, Sweden, Estonia, Finland, Poland, UK, Israel, Germany, Austria, Switzerland, Hungary and a combined selection of other European countries.