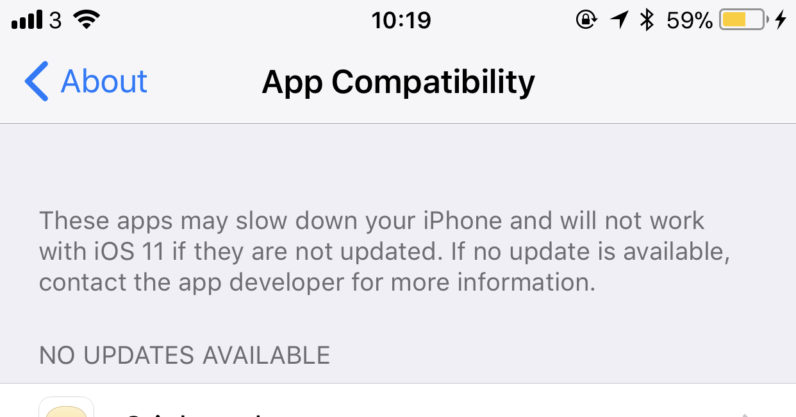 Several months after Apple announced the new and improved iOS 11 at Wolrdwide Developers Conference, the company is at long last gearing up to release the revamped version of its operating system for mobile. But there might be a nasty surprize in store for some iPhone users.

While Apple has been running beta tests with the latest iteration of iOS for some time now, updating to the official version 11 could slow down – and perhaps even make unusable – a series of apps that are yet to be optimized for the new release.

This is admittedly a nuisance, if you happen to rely on such apps heavily; but there is a nifty little trick you can use to mitigate the damage.

As spotted by some users on Twitter, Apple has added a section in Settings where you can view which apps are already compatible for iOS 11.

Please note that some users won’t see any apps on the list: This means all of your installed apps are already supported in iOS 11.

Wow, this is spreading. FAQ:

1. If you can’t get a list, you have no incompatible apps installed. 😎

Another thing to point out is that you can still update to iOS 11 in case some of your apps are not yet compatible. Unsupported software won’t disappear; instead, it’ll remain inactive until an update has been rolled out.

But given the many quirks and kinks of iOS 11, you might be in for a longer than usual delay.

Read next: How to stop sites from 'borrowing' your CPU to mine cryptocurrency