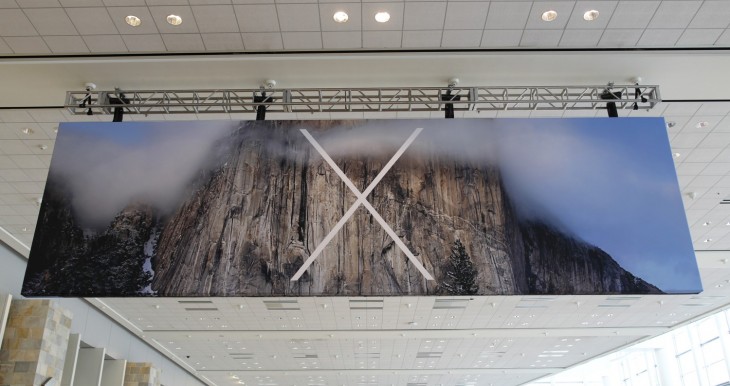 Apple on Monday showed off OS X Yosemite with a flat design at its annual developer conference, WWDC, in San Francisco. The company first introduced its flat design aesthetic with iOS 7 last year.

OS X Yosemite is available to developers today. The free consumer release is scheduled for this Fall, though non-developers can sign up for public beta access this Summer. When the link goes live, you can sign up for the beta here.

With Yosemite, Apple has added translucent layers to Finder and the Dock, as well as a dark mode for menus. Notification Center now has a Today view, similar to iOS. Developers will also be able to provide Notification Center widgets as part of their OS X apps.

A new Continuity feature allows you to switch between your Mac and iOS devices by prompting you to pick up where you’ve left off. Macs will also automatically detect and join your iPhone’s hotspot.

OS X can now act as a relay to send text messages and phone calls. When your iPhone gets a call, you can see the caller ID and accept it from your Mac to use your computer as a speaker phone. Apple SVP Craig Federighi demonstrated the feature by giving new employee Dr. Dre a call.

Spotlight search can pop up in the middle of the screen instead of just from the menu bar and pull up unit conversions, contact info and Maps info. The feature looks quite similar to the popular Alfred app launcher.

Apple also announced a new iCloud Drive feature for sharing files across devices, including iOS devices and Windows machines. The addition brings it into competition with services like Dropbox.

OS X Yosemite includes a number of improvements to the much-maligned Mail app. A new Mail Drop service will allow users to send files up to 5GB in size. A ‘Markup’ feature lets users add Skitch-like annotations to their email attachments.

Safari in Yosemite adds improvements to the smart search field, such as allowing you to view your favorites right within the URL bar to save screen real estate. The browser also includes a new tab view and scrolling across the tab bar. A new share button lets you send links and photos to recent contacts.

After years of charging for incremental updates to OS X, Apple switched to a free model last year, offering the latest version of its software as a complimentary upgrade to existing customers.

Apple revealed today that it now has a Mac install base of over 80 million users. OS X Mavericks has over 40 million copies installed with a 51 percent adoption rate.

Read next: Apple unveils iCloud Drive, a new way to store and access all of your files