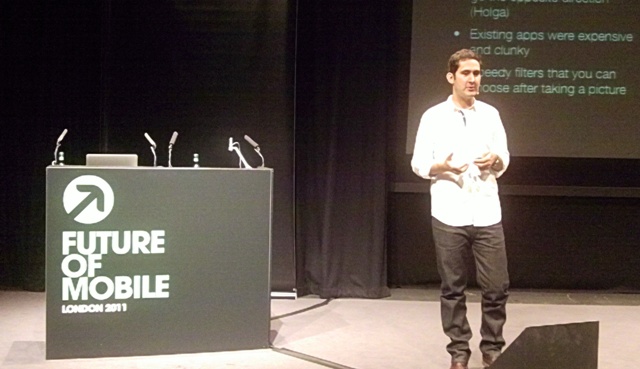 Photo sharing app Instagram is one of the major success stories from the app world, notching up a cool million downloads within three months of launch in October 2010. Today it has over 9m registered users and well over 10m downloads under its belt, despite only being available on the Apple App Store.

Sometimes an app is just so sweet, you can’t help but keep talking about it, even indirectly. For example, we’ve covered Web-based alternatives to Instagram, put Instagram up against PicPlz, looked at a neat screensaver for Instagram, examined 10 early adopter brands that are using the app, uncovered 5 complementary Instagram apps and even found a pretty decent Android alternative to its iOS counterpart.

The Next Web was at the Future of Mobile Conference in London on Friday, and following co-founder Kevin Systrom’s keynote speech, we caught up with him to get some insights on the photo-sharing app.

But first, it’s worth taking a look back at Instagram’s history, as regaled by Systrom himself.

There are a number of lessons to be learnt from the Instagram story, and it shows that it’s often the little things – the details – that can be the difference between success and failure.

“How can we grow our app to be applicable to everyone and grow into different segments of society?”, was the main question they wanted to answer prior to launch. Not a straight forward question, but it’s worth looking back at Instagram in its former incarnation. Everyone’s allowed a false start, aren’t they?

Before Instagram there was Burbn. In its simplest form, it was like an HTML 5 version of Foursquare – it was a social check-in app that let users share their location and other content…such as photos. Whilst it was reasonably popular amongst a small user base, Kevin says it was “confusing, undifferentiated and slow”. So it wasn’t a bad idea as such, it just didn’t bring anything new to the table or, ultimately, solve many problems. “We were in an exciting space, but it was too big”, says Kevin. “A few people were using us a lot, but outsiders would bounce”.

But if Burbn was anything, it was a testbed – it was an unintentional experiment that paved the way for what would become a very successful app. The key, it seems, was in identifying ‘unexpected behaviors’ and looking at how people were actually using the product as opposed to how they were meant to be using it. Kevin pointed to the YouTube analogy which, if you didn’t know, started off as a video website aimed at the dating market – but it soon pivoted when users started uploading videos of cats doing cute things.

Kevin and Co. asked: “If we could keep one core feature of Burbn, what would it be?” It turns out that people were using it a lot to share photos. So Burbn pivoted from being a location-based app that let you share photos, into a photo-sharing app that had pretty neat location-based functionality built in. So rather than throwing the baby out with the bath-water, the company merely shifted the spotlight and discarded a lot of the features that weren’t really related to photos.

The pivot: Focus on problems, not solutions

“The app store is 90% full of solution-based apps”, says Kevin. “But do they solve a problem?” A good question, but it was this concern that was the building blocks of Instagram. “Let’s focus on problems, not solutions” was the ethos as Burbn turned on its heels and morphed into Instagram.

“With Burbn we started at a solution and worked back”, says Kevin. “That’s the wrong way to do it. You have to start with the problem and work forward from that”.

This is a key point. Rather than setting out to simply do cool stuff with a solution-based approach, it’s important to determine whether it will actually solve anything. If it doesn’t, then nobody will really use it. So the Instagram team asked themselves “What’s the biggest problem people have with photos?” They listed the problems and then set out to see how they could solve them.

But they were all too aware that others had already been where they were heading. “One of the things that scared us most was looking at the history of other photo apps”, says Kevin. “We looked at other apps, for example Radar, which had secured investment but ultimately failed. You have to look at those who have failed though. Also, you can’t just do what people have done before, you have to do something new”.

So, what were the problems Instagram sought to solve? Well, it turns out there was three main ones.

Kevin observed that, at the time, mobile phone photos were typically low quality, “they looked terrible”, says Kevin. “And so we asked: How can we fix that?”. They also looked at the trends in the App Store to see what the key features of other popular photos apps were. It turns out that filters were popular, but the Instagram team felt that the existing apps were expensive and clunky.

In addition to beautiful pictures, they wanted to focus on speed – photos that not only could be uploaded quickly but where filters could be added quickly too, once a photo is taken.

Typical photo-sharing apps at the time, according to Kevin, were incredibly slow in terms of upload/download speeds. And this is where Instagram found a very simple solution to what was a real problem. “Sometimes app developers look for really complex solutions, when sometimes it’s just the simple things that’s what’s needed”, says Kevin. “How can we speed up people’s uploading? We basically optimized the app for the iPhone 4”.

So, the iPhone 4,which has a maximum resolution of 612 x 612, is what the app was built for and this meant no massive files. It kept things simple and was of good enough quality for what its users needed. Crucially, Kevin also talked about how they managed to ‘mask’ the slowness – so basically, they would hide any lag-time by starting the upload instantly, before any of the tagging activity had started. By the time the user was ready to upload it was already underway. “It wasn’t rocket science”, says Kevin. “Just common sense. It’s the simple things, the details that really matter”.

The third problem the Instagram team identified was distribution. It’s what Kevin calls the “which app do I use to share this” problem. So many apps and platforms supported photo-sharing, and users typically had to choose a single network to share it to at any one point, so they set out to see how they could solve the problem of sharing across multiple platforms from within Instagram, and this shouldn’t be underestimated. “People default to the greatest value distribution”, says Kevin. Instagram managed to ‘consolidate the value and preserve the optionality’ thus helping to create a viral loop.

Today, Instagram has 4m visits each day to its website. “I can’t wait until we have a proper website to unveil, those 4m will turn into something really awesome”, says Kevin.

Almost every digital company will talk about timing or an element of luck when discussing why they succeeded. With Instagram, the iPhone 4’s camera played a big part in its success. It was a real step-up in terms of quality and it was a good time for Instagram to capitalize on this.

Results: ‘It’s what you don’t do that defines your product’

This also required looking at previous products that had failed to see how they hadn’t solved the problems and what Instagram could do to ensure it didn’t make the same mistakes. This is ultimately what gave them confidence that what they were working on was a good product.

Armed with a problem-busting photo-sharing app, the last remaining barrier to success was getting Instagram into the public’s consciousness. They started with 100 beta invites, which were offered to designers, creatives and influencers such as Twitter’s Jack Dorsey. Kevin hit on a key point when trying to promote new products, in that targeting key influencers doesn’t guarantee anything if they don’t like the product. “We told Jack about Burbn, he used it for a day and that was it”, says Kevin. “With Instagram, we noticed he was using it everyday”.

Instagram secured around $7m in funding earlier this year from a number of sources, one of which was Jack Dorsey who, it seems, was a fan of the app from the very beginning. It was the groundwork that Instagram had put in, the effort to solve problems that eventually caught the eye of the ‘beta crowd’.

They also contacted the press directly rather than using a PR firm, and Kevin notes that this went down very well. A good product, pitched by the passionate creators themselves, and as it happens they secured a load of good coverage for launch. “We were shameless about contacting people who we thought would love the product”, says Kevin. “But it paid off. People actually said to us there’s no point contacting publications such as The New York Times and that we’d be wasting our time. But not only did The New York Times speak to us, they also sent someone to meet with us”.

On the day of launch in October 2010, all the press coverage happened at roughly the same time and their servers were hit hard. “Our @replies weren’t exactly encouraging”, says Kevin. “People were questioning if we knew what we were doing and we were concerned that we may blow our big opportunity”.

So its single tiny hosted server struggled under the weight of an eager early customer base but, as Kevin says, “we lived to tell the tale”.

A one platform approach

Perhaps one of the most common gripes about Instagram so far has been that it’s only available on a single platform. So, unless you own a portable Apple device, all you can do is listen to others waxing lyrical about it. So why hasn’t Instagram been released on Android or any other platform yet? “There’s no reason to be on two platforms from day one”, says Kevin. “You need to figure out whether it works first”.

By focusing on being the best it could on one platform, it could properly give its attention to making it work, fine-tuning it, responding to user feedback and generally testing the market. Furthermore, existing on one platform meant the team could remain small and nimble, and they could look at growing the app in other ways. For example, when they realized it was getting global traction, it was translated into other languages quite early on.

The Next Web meets Kevin Systrom

The Next Web caught up with Kevin Systrom at The Future of Mobile Conference in London on Friday. We discussed why their first hire was a community manager, what it’s doing with its $7m investment, what he feels sets Instagram apart from other startups, what’s on the horizon in the build up to iOS 5 and the question you all want to know the answer to: When IS Instagram coming to Android?

Read next: Cc:to me turns your email inbox into an Instapaper alternative