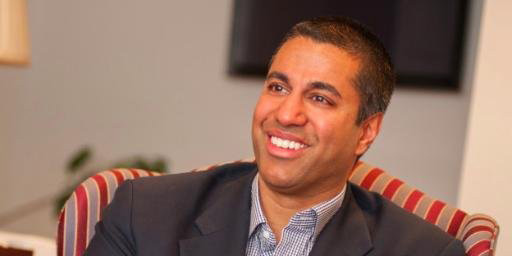 Following an arduous battle spanning several months from May 2014, the US Federal Communications Commission (FCC), under the able leadership of former chairman Tom Wheeler, managed to establish net neutrality in the country in February 2015.

Sadly, it looks like the move to prevent broadband providers and mobile carriers from offering ‘fast lanes’ for select services and throttling bandwidth from others, will soon be undone as the new chairman – former FCC commissioner Ajit Pai – takes charge.

This afternoon, I was informed that @POTUS @realDonaldTrump designated me the 34th Chairman of the @FCC. It is a deeply humbling honor. pic.twitter.com/Joza18aP33

Pai, who was appointed to his new role by President Trump on Monday, has vociferously opposed net neutrality over the past couple of years, including the time when former chairman Wheeler was championing the cause.

That’s bad for consumers who want fair and equal access to information and services online, but good for ISPs who want to cut deals with content providers (like streaming video networks, for example) in exchange for prioritizing bandwidth towards their offerings.

What’s scary is that Pai is keen on going after net neutrality right away. In a letter he penned last month with fellow FCC commissioner Michael O’Rielly to lobby groups representing carriers and small ISPs (PDF), he said that he intended to “revisit … the Title II Net Neutrality proceeding … as soon as possible.”

With Wheeler out the door and both Pai and O’Rielly still at the agency, it seems all but certain that net neutrality will be decimated in the months to come.

That’s a problem not just for internet users in the US, but also those across the globe. If world’s most powerful nation doesn’t set an example by enforcing these guidelines, it’ll be even harder than it already is for activists in other countries to fight for the regulation of service providers.

For instance, India began grappling with the issue of net neutrality back in 2015 when the country’s telecom regulatory authority (TRAI) began looking into how it should govern online services. In the months that followed, a nationwide debate sparked over the introduction of Facebook’s Free Basics (formerly Internet.org), which granted users access to select sites on the social network’s platform at no charge.

The service was eventually blocked in India last February when TRAI banned differential pricing for data in the country. However, Free Basics is still operational in several other developing countries and Facebook remains the gatekeeper of the sites and services available to users there.

It remains to be seen just how effective Pai will be in his effort to dismantle net neutrality in the US over the next year (he’ll need to be reconfirmed by the Senate if he’s to stay another five years). Sadly, that seems like enough time to get the job done.