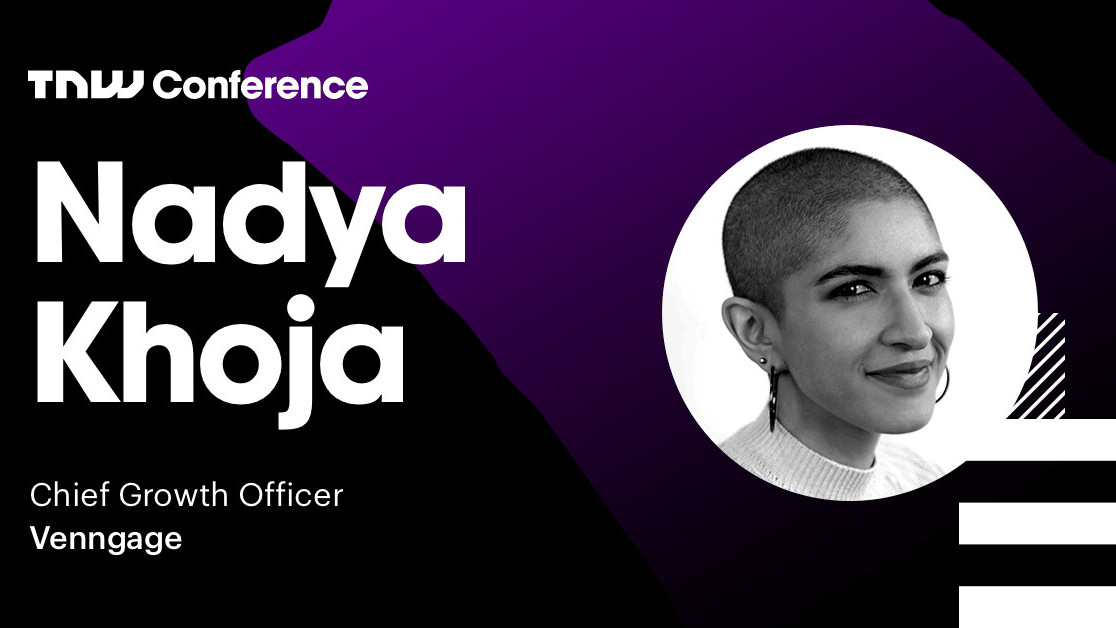 Building engagement with your audience can be really hard in today’s tech landscape – while many more channels are available to share your brand story, it’s harder to cut through the noise. So how can marketers establish themselves?

Nadya Khoja, Chief Growth Officer at Venngage, has worked hard to figure it out. She’s built a strong online audience for Venngage, but also for herself. Ahead of her TNW Conference discussion, I asked her about her experiences, lessons learned, and how she sees the future of tech influencing tomorrow’s marketing techniques.

What was the driving force behind starting your own web-series, Drunk Entrepreneurs?

Many drinks. I was in New York with a friend who’s a successful entrepreneur. We had a few too many and started chatting about work. He was telling me things he probably wouldn’t say if he was sober (ie. really insightful tactical secrets about how he found success) and it was absolutely ridiculous and hilarious. I thought to myself, “I would watch a show that was like this all the time.” So I created a landing page, wrote a quick LinkedIn post, and got over 100 signups to the email list within a few hours.
Granted, getting drunk and then recording yourself is easier said than done, so I definitely need to get better at figuring out the strategy behind productive drinking…

Within your four years at Venngage, you’ve grown from Digital Marketer, to Head of Marketing, to Chief Growth Officer. What have you learned in each of these roles?

The main takeaway I gained was to always focus on doing whatever would be “right” and would lead to effective growth for the company. Not just revenue, but culture as well. And that meant not being siloed in my role of marketing, but doing what I could to ensure the success of every individual at the company. Because if each person was successful, in theory, the company would be successful. As a result, I also learned that having an ego and thinking that I always know what’s best, is wrong. By focusing on ensuring that my team is given autonomy and accountability, and encouraged to make their own decisions, we can foster a culture of continuous growth.

What’s the biggest challenge you’ve faced growing Venngage’s user base? How did you overcome it?

There are always challenges and the word “overcome” is tricky, because as you figure out one thing, you are faced with several new issues. Specifically, there was one occasion when our traffic dropped 30%. It was tough but rather than giving up, I saw it as a new puzzle to solve. It taught me to be a lot more strategic in our growth and to always pay attention to the full picture.
I tell my team to always think about how they can kill ten birds with one stone, rather than just two. All that means is reflecting on how one action you take can have a much bigger impact. Overall, I focused more on strategy and learned as much about it as possible. But I always consider setbacks or mistakes to be an initial trigger of better learnings and bigger opportunities in the future. If everything is always going smoothly, you risk getting complacent.

What advice would you give to other marketers or bloggers trying to build an audience with a startup budget?

You don’t need money to make money. You just need to be creative in how you approach problems. And just because the CEO or some other higher-up at the company doesn’t believe one method is possible, it doesn’t mean they’re right.
I think what marketers should focus on is identifying the main KPIs or data that are indicators of growth, and keep breaking those inputs down into smaller, more testable inputs. You don’t need to go all out right away and build this massive strategy first. You can test small things out little by little and once you find something that works well, then double down on it and scale it up.

What piece of tech do you rely on the most in your daily role? How do you see tech playing a role in marketing in the future?

Venngage is obviously the tool I use most frequently. I rely on it to visualize ideas to help me see the bigger picture.

The obvious technologies I rely on are, of course, my phone and computer, because it’s the only way I can communicate with people on a global scale at any moment. That’s what the future of marketing is — spreading out ideas faster. And we can only do that by connecting with other people and building relationships with the individuals who will help us get those thoughts out faster and to the right people. Communicating our ideas in a visual way helps our audience truly understand what we are saying and makes engagement easier.

Want to learn more about the future of tech and marketing? Don’t miss the Re:Brand track at TNW Conference!