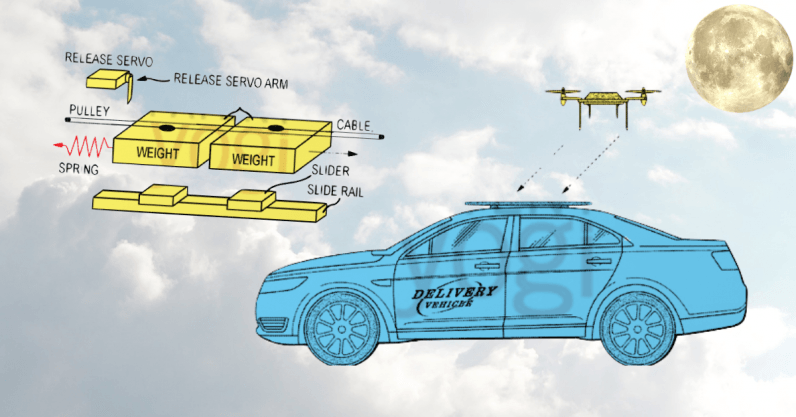 Ugh, the Gregorian calendar is so boring. That’s why we’re disrupting monthly series with a lunar cycle-based series about the best patents of the last synodic month, picked by the PatentYogi team. Get ready when that moon gets gibbous, y’all. This February-ish roundup lands on the beautiful Snow Moon!

Since my last post, the US patent office issued over 33,041 patents and published over 32,210 patent applications. Each patent asset adds a little something new to the human knowledge base. As I cannot list all these patent assets here, the PatentYogi team and I have selected the five most interesting patent assets. Enjoy!
[in-content-unit]

We’ve all been in a situation where we’re awkwardly trying to avoid certain people. It may be a pesky ex, a creditor we may have borrowed money from, or even our bosses in some cases. How we wish that there was an alert to tell us of those people’s whereabouts so that we may not cross paths with them.

A recently published patent from Microsoft reveals an undesirable encounter avoidance  (UEA) system that allows you to avoid running into selected people, without compromising the privacy of any party.

The UEA system includes a UEA server that communicates with various information sources, users, and other components via the internet. For example, the UEA server interacts with social media servers, mapping servers, and other services to know your location, and the selected people that you wish to avoid (let’s call him ‘Bart’).

Like you can see in the image above, if you are traveling to the ‘Coffee Palace,’ and the UEA system determines that Bart is there or  going to be there in the near future — based on data collected from Bart’s mobile phone — then the UEA system automatically finds alternate cafes (like ‘Donut Palace’) and recommends you to go to the Donut Palace instead of the Coffee Palace.

The system will help some users comfortably live their lives while going through difficult relationships.

However, a recent patent from Microsoft reveals technology that will enable your smartphone to understand the real meaning of any audio instruction by capturing an image of the surrounding environment through a camera sensor along with receiving the audio instruction.

Microsoft technology uses an image integrated query (IMQ) system, which performs speech recognition and image processing on the audio instruction and the image to understand your intent. For example, as shown in the figure above, you can have an object (in this case a bear bell) in your hand and can ask your computer “add this to my shopping list.”

Your computer (with the IMQ system) will identify the object of interest from the captured image. Then, as per your audio instruction, a shopping application will be activated where the system can look for the bear bell, and then place the bear bell in your shopping cart.

Disney never stops trying to amaze us. From their first interacting robots in the 1960s to their present robots that we encounter in most of their theme parks, Disney has been working rigorously in their robotics department. Despite having been at it for over 50 years now, the company is still striving to make cool robots.

Gone are the days when robots, in Disney’s theme parks, were only supposed to speak (generally a pre-recorded speech or song), or move their head, or even sit or stand at a fixed supporting structure. Now with Disney’s recent patented technology, a robot will not only be able to walk like a human but will be able to perform acrobatics or stunts — probably better than most of us. This technology might make a stuntman feel slightly insecure about his job.

Disney’s robot includes an inertia shifting assembly (within its body) which allows the robot to control its rate of spin while performing acrobatics (such as summersaults) through the air. The inertia shifting assembly includes sensors and a drive mechanism. Further, the drive mechanism includes two weights that can be moved in order to shift the robot’s inertia so as to modify the spin rate.

For example, in order to slow down the rotation of the robot, the two weights of the drive mechanism are pushed away from each other (through springs as shown in figure above) which slows the rotation in a manner similar to a spinning ice skater who extends their arms to reduce their rotation speed. Similarly, in order to increase the rotation, the two weights are pushed towards each other (through the servos shown in the figure) which increases the rotation in a manner similar to the spinning ice skater who shrinks their arms to increase their spin.

Unmanned Aerial Vehicles (UAVs) are expected to radically change the package delivery industry, with the likes of Amazon pushing through multiple innovations in this space, such as noiseless drones and beehive shaped drone airports. It won’t be long before UAVs are mainstream and we see them zipping around making deliveries. But, they may run out of batteries while doing so. This is a problem we need to solve fast as it may be dangerous if a UAV runs out of juice mid-flight while making a delivery.

I don’t know about you, but I don’t find it very comfortable to type on small virtual keyboards available on smartphones. Sure, smart assistants are getting better at recognizing voice, so you do have other options, but it’s not always possible to use them — like in noisy environments. Also, they’re not great when you don’t want other people in your business.

A recent patent publication from Microsoft which reveals a revolutionary eye-typing technology could be the perfect solution to this. Your eye-gaze is monitored to find out the gaze location on a virtual keyboard displayed on your smartphone. Then, advanced machine learning algorithms are used to predict responses, such as words that you wish to type.

The words will be predicted based on statistical models ranking common words associated with certain letters and contexts. For example, if you are updating your sports blog, you are statistically more likely to use sports related terminology like “homerun,” “touchdown,” and “linebacker.”  The beginning and end of words will be predicted by your gaze location shifting away from the virtual keyboard, or towards specific keys like space, comma, or period. The predictions will then be shown for your approval and implemented accordingly.

In this patent, Microsoft addresses deficiencies in the current eye-tracking and gaze-input systems by providing an intelligent, dwell-free eye gaze input system. Dwell time is a time in which your gaze remains fixed on the same letter for a set time period to register the letter in the eye-typing system. Longer dwell time not only leads to unacceptable typing speeds but also increases fatigue, as well as frustration.

Microsoft technology does not require you to fixate for extended amounts of time, but rather it just requires your quick glance at letters that form a desired word. In some example aspects, a visual trace may be drawn on the screen that follows a path of eye movements to provide feedback to the user, as shown in the figure above.

Look out for the latest lunar cycle-based patent update every full moon. Next up is the icky Worm Moon in late March. See you then!

Read next: Inside NEO’s plans to get Microsoft .NET devs to build apps on its blockchain