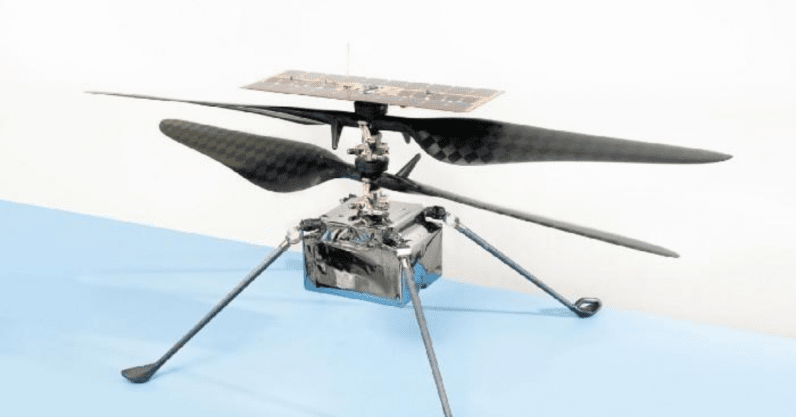 Batteries onboard the Mars Helicopter Ingenuity are charged up, prepping systems for the historic Mars 2020 mission to the Red Planet.

Ingenuity is designed to become the first vehicle to ever carry out a powered flight on another world. This unique aerial vehicle, although small and relatively simple, is a scientific experiment that could revolutionize how we explore other planets.

On March 7, one week after launch, electrical systems started charging batteries onboard the Mars Helicopter Ingenuity for the first time. Following an eight-hour charge, battery levels reached 35 percent. Mission planners previously determined this low charge-rate is optimal for preserving the battery for the journey to Mars.

“This was a big milestone, as it was our first opportunity to turn on Ingenuity and give its electronics a ‘test drive’ since we launched on July 30. Since everything went by the book, we’ll perform the same activity about every two weeks to maintain an acceptable state of charge,” said Tim Canham, the operations lead for Mars Helicopter at NASA’s Jet Propulsion Laboratory.

On August 14, a scheduled course correction slightly altered the path of Mars 2020 on its journey to the Red Planet. Another correction will come on September 30, 62 days after launch. On February 10 and 16, 2021, another pair of corrections will guide the spacecraft to its proper trajectory to Mars. Mission planners hope everything is aligned at that time, but they still have two other chances to fine-tune the course of the spacecraft — guiding it toward a safe entry into the atmosphere of Mars — on February 17 and just eight hours before Mars reaches its destination.

Touchdown is scheduled for February 18, 2021. For the first few weeks, Ingenuity will remained stowed to the Perseverance rover. In spring 2021, the Martian Helicopter will separate from Perseverance, and the rover will drive away.

Five flights are planned for the interplanetary whirlybird. Mars has been examined by flybys and orbiters, studied by landers, and scoured by rovers. But never before has Mars (or any planet) been examined by an aerial vehicle, soaring through the air surrounding an alien planet. The NASA video below shows a look at the Mars Helicopter Ingenuity, headed to a historic flight on the Red Planet.

Several challenges faced designers of the Mars Helicopter, not the least of which is that the atmosphere of Mars is only one percent as thick as ours on Earth. To compensate, engineers designed extremely lightweight blades, 1.2 meters (four feet) across.

“Ingenuity features four specially made carbon-fiber blades, arranged into two rotors that spin in opposite directions at around 2,400 rpm — many times faster than a passenger helicopter on Earth. It also has innovative solar cells, batteries, and other components,” the NASA team describes.

The frigid environment of Mars required the vehicle to withstand temperatures as low as -90 Celsius (-130 Fahrenheit). These temperatures alone will test the limits of technology employed on the craft.

The Mars Helicopter, standing 49 cm (19 inches) tall, is constructed from two kilograms (four pounds) of off-the-shelf materials and new technologies. Once deployed from the 1,025 kilogram (2,000 pound) Perseverance, Ingenuity will be powered solely by its own solar power.

The significant distance between Earth and Mars prevents ground crew from controlling the interplanetary helicopter directly, due to time delays between the two planets. Therefore, Ingenuity will receive its planned flights well in advance, and will have autonomy to reach its goal safely. Only after the flights will human controllers know what happened during the tests.

“Ingenuity will use solar power to charge its batteries and rely on internal heaters to maintain operational temperatures during the cold Martian nights. After receiving commands from Earth relayed through the rover, each test flight is performed without real-time input from Mars Helicopter mission controllers,” mission engineers explain.

The small size of the craft meant engineers had to develop new technologies small and light enough to fly aboard an automated helicopter in the thin Martian atmosphere. These instruments and equipment also have to survive the harsh Martian environment, requiring designers to develop several new technologies.

“But many of its other components are commercial, off-the-shelf parts from the world of smart phones, including two cameras, an inertial measurement unit (measuring movement), an altimeter (measuring altitude), an inclinometer (measuring tilt angles) and computer processors,” Jet Propulsion Laboratory reports.

The pair of eyes on the Mars Helicopter include one color and one black-and-white camera.

The name of the helicopter was first envisioned by Vaneeza Rupani, a high school student in Northport, Alabama. Although Rupani suggested the idea to NASA for the Perseverance rover, the space agency recognized the name as ideal for the Mars Helicopter.

Ingenuity survived launch, and if the vehicle comes through the journey, landing, deployment, and frozen nights during pre-flight checks, this drone will be ready for 31 days of flight tests.

Should these test flights prove successful, the Mars Helicopter Ingenuity will open up a new dimension in the exploration of the atmospheres and landscapes of other worlds. Future aerial vehicles could, one day, explore Mars, as well as Venus, Jupiter, Saturn, Uranus, and Neptune, and Saturn’s largest moon, Titan.

Read next: 7 lead generation lessons we learned by creating a Facebook quiz