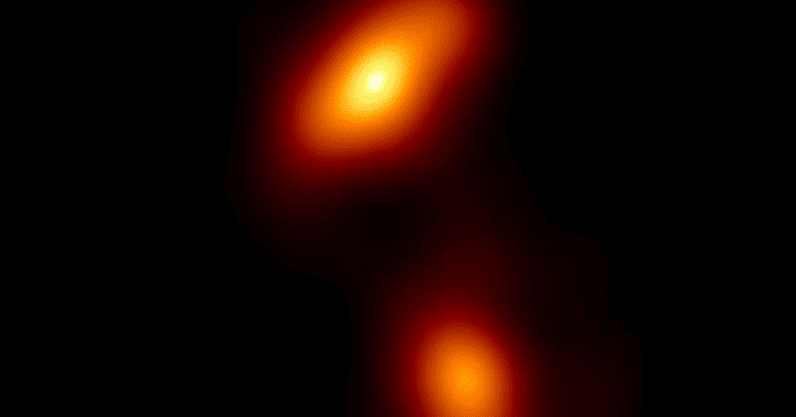 Quasar jets imaged by the Earth Horizon Telescope (EHT) show galactic movements in unprecedented detail. Movements of vast quantities of gas, racing away from Quasar 3C 279 at speeds near the speed of light, reveal signs of a violent past.

In 2019, the The Earth Horizon Telescope (EHT), a network of radio telescopes, released the first-ever image of the region surrounding a black hole. Now, astronomers examining data from this study focused their sights on a different object, a quasar named 3C 279.

Jae-Young Kim from the Max Planck Institute for Radio Astronomy (MPIfR) in Bonn led a study examining the jet seen emanating from 3C 279. The team traced this feature back to its source, where radiation violently fluctuates over a wide range of frequencies.

Quasars are distant galaxies, centered on highly-energetic supermassive black holes. These objects are powered by vast quantities of gas falling into these regions, fueling an enormous output of radiation. Under the right conditions, these objects can form jets, which race away from their source at great speeds, following powerful magnetic fields.

“Relativistic jets in active galactic nuclei (AGN) are believed to originate from the vicinity of a supermassive black hole (SMBH), which is located at the center of the galaxy. Understanding the detailed physical processes of jet formation, acceleration, collimation, and subsequent propagation has been one of the major quests in modern astrophysics,” researchers described in an article published in Astronomy and Astrophysics.

The SMBH at the heart of 3C 279 contains as much mass as a billion suns. It sits roughly five billion light years from Earth, seen in the constellation Virgo. The pair of jets race away from the supermassive black holes that formed them at velocities close to the speed of light.

The EHT takes advantage of a technique known as very long baseline interferometry (VLBI), linking together signals from radio telescopes around the world. By networking together dozens of observatories around the world in this fashion, radio astronomers are able to view the Universe at a level of detail equivalent to seeing an orange on the Moon.

Data from the EHT is compiled together at the Max Planck Institute for Radio Astronomy (MPIfR) and at MIT’s Haystack Observatory. Once prepared, the data is examined by researchers around the world.

At a distance of five billion light years, astronomers are able to view detail in 3C 279 just one light year across (one-quarter of the distance between the Sun and our nearest star). This unprecedented level of detail allowed astronomers to trace the jets back to their bases, where an unexpected twist was seen. Material was also seen radiating outward at right angles to the main jets, which may be centered along poles of the disk surrounding the galactic black hole.

“We knew that every time you open a new window to the Universe you can find something new. Here, where we expected to find the region where the jet forms by going to the sharpest image possible, we find a kind of perpendicular structure. This is like finding a very different shape by opening the smallest Matryoshka doll,” said Jae-Young Kim, researcher at MPIfR who headed this study.

For the first time ever, astronomers were able to see movement and changes in these jets. These changes, seen over the course of days, are likely the result of material spinning into the black hole, as well as the rotation of the disk. Such movements have been predicted by numerical and virtual models, but never before seen in nature.

“For 3C 279, the combination of the transformative resolution of the EHT and new computational tools for interpreting its data have proved revelatory. What was a single radio ‘core’ is now resolved into two independent complexes. And they move — even on scales as small as light-months, the jet in 3C 279 is speeding toward us at more than 99.5% of light speed!” exclaimed Avery Broderick, an astrophysicist working at the Perimeter Institute.

At first glance, these jets seem to defy the laws of physics. Due to an optical illusion, these jets appear to race away from the quasar at 20 times the speed of light — far above the speed limit of the Universe.

This effect is the result of material heading in our direction, “chasing down” the light which it emits, creating the illusion that the jet is traveling at speeds greater than the speed of light. Such conditions would also suggest shock patterns and/or instabilities might exist within bent, rotating jets. This would explain high-energy electromagnetic energy, including gamma rays, released from the outbursts, researchers suggest.

Read next: Coronavirus is making your VPN even more invaluable than ever.