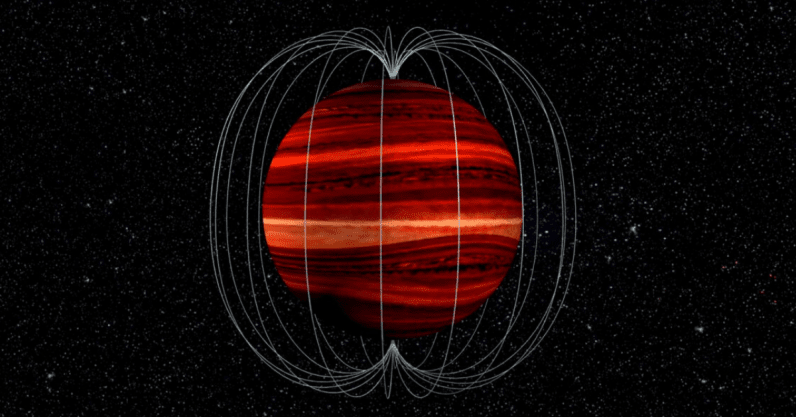 Using a combination of the Very Large Array (VLA)— a cluster of 28 radio telescopes located in New Mexico — and NASA’s Spitzer space telescope, astronomers have made the first measurement of wind speeds on a brown dwarf. The finding not only grants researchers an insight into the atmospheres of brown dwarfs but as they exist as an intermediate between gas giant planets and stars, the team’s results could also help in the investigation of planets outside the solar system — exoplanets.

The team of scientists, led by Katelyn Allers of Bucknell University, used techniques previously employed to measure wind speeds on the solar system’s giant planets, Jupiter and Saturn, to conduct the study, which is documented in a paper published in Science.

The team used a novel combination of radio wave observations from the VLA and infrared observations from Spitzer to study the brown dwarf 2MASS J0475385+212434 (2M1047) — which is located 34 light-years from Earth — finding wind speeds much faster than those of Jupiter and other gas giants.

The characteristics of 2M1047 act as an example of why brown dwarfs are considered to be ‘failed stars.’ It has a radius roughly the size of Jupiter’s, but a mass 40 times greater than the solar system’s largest planet. Yet, is still not dense enough to ignite the thermonuclear reactions that define stars.

“A brown dwarf is an object that is too massive to be a planet, but not massive enough to be a star — they don’t fuse hydrogen into helium in their cores, as stars do,” says the paper’s co-author Dr Beth Biller, School of Physics and Astronomy, University of Edinburgh. “They are basically kind of the missing link between stars and planets.

“Brown dwarfs are considerably hotter than the planets in our solar system — with cloud top temperatures similar to that of a candle flame — but they are still much cooler than stars,” Biller explains. “Since they are relatively cool, this allows clouds to condense in these atmospheres, but as they are hot compared to planets, these clouds are not water vapor clouds.

The researchers expect the similarities between Jupiter and brown dwarfs like 2M1047 to extend beneath their respective surfaces and beyond the top of their atmospheres. It is these widely distributed similarities that led the team to conclude that the same methods used to measure wind speeds on Jupiter could be applied to a brown dwarf. Below is an animation illustrating how measuring the rotation speed of the brown dwarf’s magnetic field and of its atmosphere allowed astronomers to calculate the wind speed.

When measuring the rotational period of Jupiter, astronomers have noted a disparity arises between results obtained by radio observations and those taken using visible and infrared radiation. The difference, explains lead author Allers, arises because the radio emission is created by electrons interacting with Jupiter’s magnetic field, deep within its interior, whilst the infrared emission originates from the top of the gas giant’s atmosphere.

In-between, these points the atmosphere of Jupiter is rotating faster than its interior as a result of its atmospheric winds. Thus the difference in measurements is also a result of said winds. That means that calculating the speed of these winds should be as simple as subtracting the value of the interior velocity — given by radio observations — from the velocity measurement given by infrared observations.

“If you measure the rotation period of Jupiter using its radio emission, you’ll find a period of 9h~55m~30s, but if you measure the period from the rotation of its cloud features in the optical or near-IR, you’ll find a slightly different period of 9h~50m~30s,” Biller says. “The approximate 5-minute difference corresponds to a velocity difference of roughly 100 m/s. In other words, what you measure here is the equatorial wind of Jupiter itself.”

The team expect the same mechanisms at play on Jupiter are also a factor on 2M1047, hence why they chose to make complementary observations with the VLT and the Spitzer space telescope — radio and infrared telescopes respectively — to assess the brown dwarf’s wind speeds.

“We did the same thing for a brown dwarf — measured the rotation period from the magnetic field (radio) and also from the clouds (infrared). The difference between those two measured rotation periods then gives the wind speed,” Biller says.

To this end, the team observed 2M1047 with Spitzer in 2017 and again the following year, finding that its infrared brightness displays a regular variation — likely as a result of a long-standing feature preserved in its upper atmosphere. The team then took radio observations of the interior in 2018.

“We measured a wind speed of approximately 1425 miles per hour— quite fast, and several times faster than Jupiter’s wind — which has been measured at around 230 mph,” says Biller.

This is the first wind speed measured for any cool, extrasolar object.

The higher wind-speed measured by the astronomers conforms with theoretical predictions for atmospheric conditions on brown dwarfs.

In addition to measuring wind speeds on more brown dwarfs, the team also hopes to turn their attention — and their new technique — to the study of exoplanets. The method may require a few adjustments when applied to planets outside the solar system, however. This is mainly because exoplanets have weaker magnetic fields than brown dwarfs, meaning that the measurements will have to be taken in lower-frequencies.

In addition to this, Biller suggests the team may have also uncovered an indirect way to study exoplanets: “Because brown dwarfs are often good analogues for exoplanets we can study their atmospheric properties as a proxy for atmospheres that are harder to access, such as directly imaged gas giant planets that are hidden in the glare of their parent star.

We’ve applied this technique to one brown dwarf at the moment, but with future telescopes and instruments, we’re very excited about the prospect of measuring wind speeds for quite a few more objects!

Read next: Daily Distraction: How to visit museums from the comfort of your home