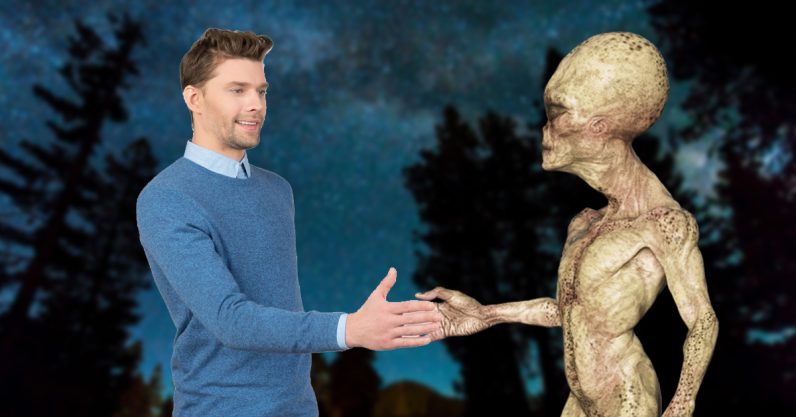 The prospect of contacting sentient aliens is a staple of science fiction. Of course, we have yet to (knowingly) find any; and it’s not impossible (albeit unlikely) that we are the only sentient beings in the universe.

Still, speculating about how contact with an alien race might go is something we tend to enjoy. Here are some fictional first contact scenarios and some thoughts on whether they are, at all, plausible.

I can’t believe this movie was made in 1996. Or rather, I can’t believe how long it’s been since 1996. (Yes, I’m talking about the original. The sequel doesn’t exist in my reality).

Is this plausible? Thankfully, no. First of all, the logistics of transporting a full-scale armada and thousands of troops to another solar system are forbidding in nature even if faster-than-light travel (FTL) is possible.

Read: [Scientist says aliens in UFOs might be Earthlings from the future]

Second of all, there is no plausible reason why aliens would go to another planet only to blow things up. A massive invasion would wreck the planet’s ecosystem and all the infrastructure that could be used to obtain natural resources.

It would be much, much cheaper for our hypothetical aliens to enter into a trade agreement.

The Prime Directive is central to the very concept of Star Trek. Star Trek: First Contact has time travel shenanigans, Borg battles, and the Vulcans just sitting there waiting for us to invent FTL before they said hi.

Is this plausible? Possibly. If humans can come up with the concept of a Prime Directive, so can aliens. If they also have the kind of history of colonialism we do, it might make sense for them to hold off until we’re “ready” for peaceful contact.

And the Vulcan motivation for wanting contact is also a feasible one, although I think a more human one would be simple curiosity. Wanting to increase diversity, to learn about different views of the world? It makes sense.

Unfortunately, it does require that our hypothetical aliens have some kind of strict rule about not contacting us. That they never, ever break. Unless, of course, they already have…

Who remembers this movie? This South African and New Zealand flick isn’t often talked about these days, but it should be; it’s an excellent, interestingly-produced movie that was nominated for four Oscars.

The concept behind District 9 is that the aliens come not as traders, nor as conquerors, but as climate refugees, fleeing a dying planet. The movie was more a metaphor for apartheid than anything else, and it’s a dark movie, not at all hopeful.

But is it plausible? There’s part of me that wants it to be, because there’s something vaguely hopeful about a dying civilization managing to have refugees to another system. It seems more likely, though, that any such refugees would try to survive in their own system, by building sustainable habitats or similar.

Perhaps if they were fleeing a supernova…

It could happen, but it just seems unlikely.

Side note: I loved this movie. I adored the way it focused on linguistics, and the way it showed that the aliens were from a gas giant without ever saying so.

It’s also a seriously strange movie that I can’t explain because it would inhibit the enjoyment of anyone who hasn’t seen it; if you haven’t, go watch it.

The central reason for the first contact, in this case, is to give humanity knowledge so as to push our development in ways that help them.

Is this plausible? Honestly, I think it might be one of the most plausible first contact movies I’ve seen. The language barrier is profound, neither side understands the other and both sides are afraid.

And in this case, the knowledge is language; language being how we think.

This implies that alien first contact would be a trade of knowledge right off the bat because our ability to communicate would be, in and of itself, the greatest benefit.

Or not. The fact is, it’s more likely that any knowledge aliens give us so we can help them would be at a more practical level, and vice versa.

So, what do I think is the most likely actual first contact scenario? First of all, the biggest implausibility about every one of these movies is FTL. It’s entirely possible that the only contact we will have with aliens will be years or decades-long conversations between the stars.

If they do come here, then their motivation is, thankfully, unlikely to be conquest; it’s more likely to be curiosity or the need to trade.

Another thing most of the movies get wrong; it’s entirely likely that we won’t be able to breathe the same air as the aliens. If we are at all compatible, we might make each other sick with our natural bacterial and viral load. If we aren’t compatible, then things in our atmosphere might poison them.

But we will be able to share knowledge, one way or another…once we work out how to talk to each other.

Or perhaps the distances are just too great and we will always be ships passing in the night, so far apart we can’t see each other’s signal flags.

And the moment of first contact itself is likely to be an exchange of data, computers talking to each other, and we may never see the other’s face.

This article was originally published on The Cosmic Companion by Jennifer R. Povey, a novelist, short story writer, tabletop RPG designer, and purveyor of opinions on matters involving science, pop culture, and society in general. She is most often found at her keyboard, but has been known to make appearances in the wild at science fiction and media conventions.

The Cosmic Companion’s mailing list/podcast. You can read this original piece here.