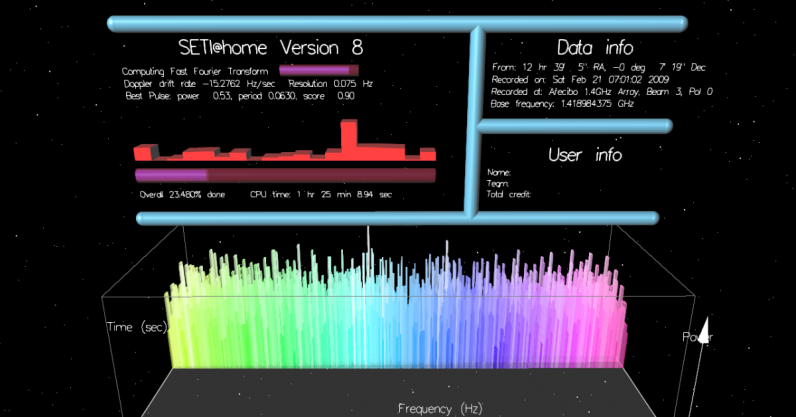 When I was twelve years old, I became obsessed with a screen saver. The screen saver pictured above, to be precise; you can watch its full glory here. It had multicolored lines that rose up inside a frame, like a kind of three-dimensional bar graph, and a whole lot of incomprehensible text and numbers that whizzed around above.

My parents were slow to bring new technology into our home, justifiably cautious about both the financial outlay and its effect on our ability to do our homework. As a result, there were a couple of years when we didn’t yet have dial-up internet at home even though most other people we knew did. (See also: we continued to watch VHS tapes well after DVDs had taken over the market.)

This meant that I could only glimpse the screen saver when I visited the homes of other, more connected friends. Between 1999 and 2001, I could often be found in a friend’s dad’s home office, watching mesmerized as the screen saver whirled around busily, doing whatever it was doing. If people thought that this was a strange place for me to be, they were polite enough not to make a big deal of it.

Because the screen saver was clearly doing something. It wasn’t like the Windows maze one or the never-ending pipes, which were obviously just novelty images there to tell you that the computer was dormant but still switched on. Eventually — and I don’t remember how exactly, though I expect I stayed late at school to research it — I found out the name of my favorite screen saver and the research it was part of: [email protected]

[email protected] is a long-term science project currently run by the Berkeley Search for Extraterrestrial Intelligence Research Center at the University of California, Berkeley. It began in the early 1960s, when astronomers first began harvesting data from vast radio telescopes — like the one at Green Bank in West Virginia—to look for signs of life beyond Earth. The search and the science is much older than the screen saver, of course, which was released to the public in 1999 and still running today. But the screen saver has been directly helping that search for the past two decades.

With the advent of widespread internet-connected home computing, researchers wanted to exploit unused processing capacity all over the world to scan huge volumes of data more quickly. Networks based on this idea had existed before—LAN, or local area networks, and technologies like Ethernet are based on a similar idea that computers can be more powerful when linked together—but the voluntary, international nature of the [email protected] project made it different.

This method of linking machines together to tackle bigger problems is a kind of distributed computing, similar to peer-to-peer networks and the systems used by massive multiplayer online games like World of Warcraft. Today, it’s also how some bitcoin mining works, with unused processing power diverted into solving the mathematical problems that can produce units of cryptocurrency. Sometimes this even happens without the computer owners’ consent, as miners use malware to network machines by stealth, so as to exploit the potential of computers that don’t belong to them, via a process known as “cryptojacking.”

Aside from questionable uses like this, there have been a number of major instances when distributed computing was put to work for scientific purposes, including the “Great Internet Mersenne Prime Search.” Many of these projects are still running today, despite the advances in processing speed now available to academics. (Wikipedia maintains a list of distributed computing efforts, which is worth perusing.) But none are as big as [email protected]

When they launched [email protected], the brains at Berkeley expected that maybe a thousand people would sign up. In fact, to date over 4 million computer users have tried out the screen saver or the associated program; even today, hundreds of thousands of active machines are scanning data, long after the project’s peak as a weird, cool phenomenon of the internet that most people were just getting to know in the early aughts. The screen saver’s popularity rescued SETI research, too, because without funds for a giant supercomputer the project was heading towards extinction. But thanks to thousands of volunteers connected all over the world, the organization could scan enormous chunks of data from telescopes in days instead of years.

I had forgotten about [email protected] until very recently. I was visiting my parents and found that they still have the screen saver as an option on their desktop computer—I put it there many years ago, and as they’ve transferred files onto successive computers it must have come with. They don’t use it, but while tinkering with some settings I found its colored bars and whirring data outputs again and set it going, watching for a while as it beavered away looking for some aliens.

I’m inclined to be nostalgic about [email protected], to consider its unprecedented popularity as representative of a kinder, gentler time on the internet. It still looks endearingly retro, and I associate it with childhood and a simpler time in my own life. It’s a lovely vision of international cooperation and community at a time when reality, online or otherwise, offers very little evidence of those qualities. Like all endeavors about the possibilities of life or existence beyond our own planet, [email protected] seems to encompass a kind of celestial spirit of adventure, an awareness that there could be more to human existence than just . . . this. Essentially, it embodies hope.

Still, I do try hard to avoid thinking of technology in emotional terms like this. Software merely reflects the people who make and use it, nothing more. [email protected] is a small aspect of a relatively minor scientific endeavor—it commands a tiny fraction of the funding given to the spheres more concerned with life on this planet, for instance—which happened to grab hold of my imagination at an impressionable age. It’s also important to understand the sheer scale of the unanalyzed radio signals that the screen saver is trying to process. Around 98 percent of the sky visible from Earth is yet to be analyzed, and the project has yet to find anything substantive.

I’ll just keep it running in the background, though, just in case.