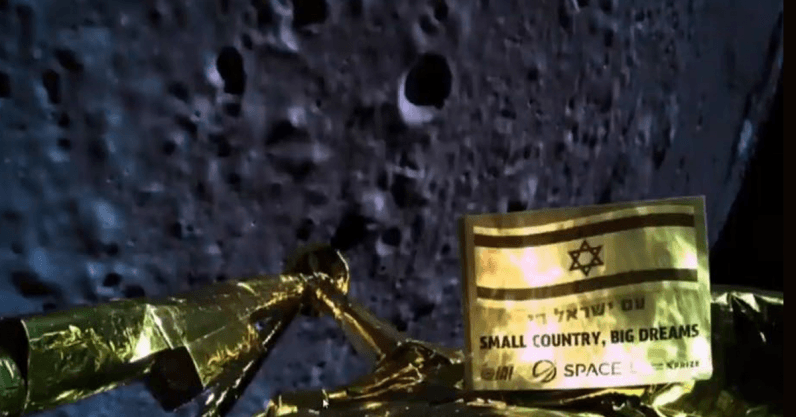 It came so close. It even took a selfie. But with only a few kilometers left to descend, something went wrong and the spacecraft Beresheet veered out of control, taking one final photograph just before it hit the surface. It is thought that there was a fault, possibly in the inertial system, possibly an engine failure, that led to the crash.

The spaceship was autonomous – its complex series of trajectory corrections to ensure a safe landing had been programmed in before launch, and could not be changed in real time. So by the time the data were received showing that something had gone wrong, it was too late to take remedial action. On the face of it, a dismal failure, once again showing that space exploration is a high risk, difficult enterprise that often ends in disappointment.

But this is not the right way to think of Beresheet. Despite its inglorious ending, the Israeli mission will be remembered as a pioneering achievement that helped to change the way the space industry operated. The story behind Beresheet (which is Hebrew for genesis, or beginning) is one of determination and drive. Three engineers got together to try for the Google Lunar XPrize – an international competition that challenged groups to design, build and fly a spacecraft to the moon and land it safely.

The company that the engineers formed, Space IL, attracted backers and funding, and made it all the way to the final – but were not ready to launch before the deadline of the challenge. Even so, they persevered, with further donations from backers and the general public, and made it to the moon. The spacecraft is a world first: a privately-funded, non-governmental vessel launched by a privately-funded, non-governmental launch company.

Beresheet took two months to get to the moon – compared with three days for the Apollo astronauts. The reason for the extended Earth-moon transit time was because the vessel shared its launch with a communications satellite and an experimental aircraft, and so was placed in the Earth orbit required by its fellow travelers. Beresheet had to climb its way from the Earth’s gravitational field by making gradual and increasingly elliptical orbits around the Earth, with the furthermost end gradually getting closer to the moon.

Eventually, Beresheet was captured by the moon’s gravity, and so was pulled into elliptical orbit around our natural satellite. It then took a further few weeks to move into the stable circular orbit required for landing on the lunar surface.

On April 11, the final preparations were made for Beresheet to land. The world was watching. The significance of the mission was immense – it was showing the way that more people could become spacefarers. To design and build a space mission through a national space agency takes decades. Public money is involved, and there has to be a fair and transparent process of mission selection to ensure that all scientific communities get the opportunity to advance their subject, almost always against a background of shrinking budgets.

The SpaceIL experience demonstrated that a small group of people with a specific aim in mind can succeed in getting their project, literally, off the launch pad, without having to go through countless (science) review processes.

But why has such a mission not taken place sooner? The growth of the space industry has expanded dramatically over the past decade, to service the continual need for Earth-orbiting satellites. Technological advances, especially the development of the CubeSat concept (production of a general framework “space bus” into which instruments could be slotted, rather than each bus having to be custom-designed to accommodate its payload), have revolutionized the planning and design of payloads, leading to cost savings through replication of parts.

We now also have independent companies that can supply rockets and launchers to deliver vehicles into space, allowing the chain from design to launch to be carried out completely in the private sector.

The end of private exploration?

It may seem that the loss of Beresheet will put back development of private space missions. But I don’t think so. Now we know what is possible, I think that there will be a more open discussion of how space agencies and private enterprise can work together, taking advantage of each others’ strengths. After all, this has been happening with NASA and SpaceX for some time already, with NASA contracting SpaceX to resupply the International Space Station.

Will the Beresheet experience affect space tourism, an industry barely into its infancy? I doubt it. The companies vying to put people into space have their own launchers, spacecraft and mission designs, and are unlikely to be disheartened by this event.

Beresheet’s science goals were modest – to take some photographs of its landing site, and make magnetic measurements that could be coupled with the surrounding geology and landscape. On balance, lunar science will probably get by without these results.

But Beresheet’s contribution to space exploration in general and lunar exploration in particular, is so much more than its science instruments. It is the future possibilities that Beresheet represents, bringing our ability to explore beyond the Earth just that little bit closer to home.

Read next: Apple’s reportedly making a tag to track your things