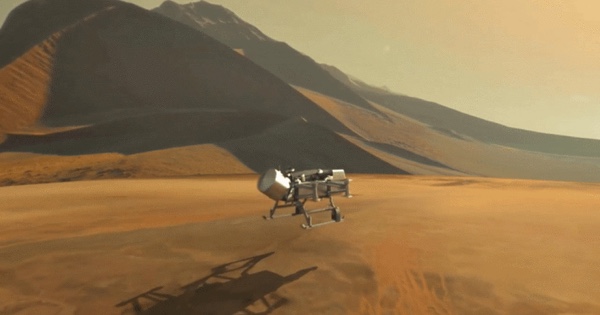 NASA yesterday announced details about its next major mission called Dragonfly, which aims to take a trip to Titan. The space agency said that it wants to launch a spaceship to Saturn’s moon by 2026, that’ll reach the moon’s surface by 2034. The mission was selected after a two-and-a-half year competition under ‘the New Frontiers’ program that refers to missions that cost less than $1 billion.

A multi-rotor vehicle – with eight rotors and drone-like flying capabilities – will stay on Titan’s surface for 2.7 years studying possible forms of life. As Titan’s atmosphere is similar to the early stages of Earth, it’ll look for prebiotic chemical processes to try and unlock mysteries of the origin of life.

Dragonfly will explore diverse environments from organic dunes to the floor of an impact crater where liquid water and complex organic materials key to life once existed together for possibly tens of thousands of years. Its instruments will study how far prebiotic chemistry may have progressed. They also will investigate the moon’s atmospheric and surface properties and its subsurface ocean and liquid reservoirs. Additionally, instruments will search for chemical evidence of past or extant life.

Dragonfly has chosen a calm weather period to land, along with a safe initial landing site, and scientifically interesting targets based on the data from NASA‘s earlier mission to Saturn, Cassini. It will first land at the equatorial “Shangri-La” dune fields, a terrain very similar to the linear dunes in Namibia. Then it’ll travel a total of 175km consisting of short, 8km flights, and reach the Selk impact crater to study past evidence of liquid water and organics.

NASA‘s Administrator, Jim Bridenstine, said that just a few years ago this mission wouldn’t have been possible, but now the team is ready. Thomas Zurbuchen, NASA’s Associate Administrator for Science, said that Dragonfly’s observations can unlock new secrets to the origin of life:

It’s remarkable to think of this rotorcraft flying miles and miles across the organic sand dunes of Saturn’s largest moon, exploring the processes that shape this extraordinary environment. Dragonfly will visit a world filled with a wide variety of organic compounds, which are the building blocks of life and could teach us about the origin of life itself.

The mission will be led by Elizabeth Turtle, who is based at Johns Hopkins University’s Applied Physics Laboratory in Laurel, Maryland. We hope that this mission can unearth new and amazing factors about life‘s origin.

Read next: You can now test Mozilla's new fast and secure Android browser