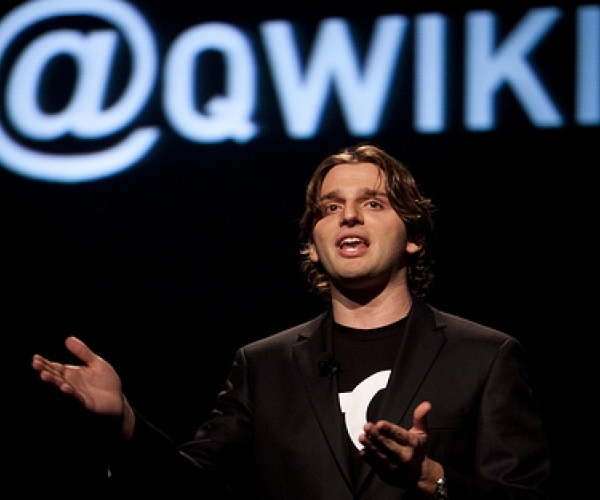 We all love a little disruption; it shifts our perspective, allows for new paradigms and opens the floodgates for forward thinking innovation. Search is one of those industries just begging for disruption as Google continues to reign over Bing and Yahoo.

Enter Qwiki, the visual feast of search that caught the world’s attention in September 2010 when they won TechCrunch Disrupt in San Francisco.

Qwiki is software that strings together content from sites such as Wikipedia, Google, Fotopedia and YouTube, and presents that content in a narrated, multimedia format called a “Qwiki.” Qwiki stresses that they are a platform not a search engine because although people use Qwiki to actually search for terms, they don’t receive an aggregation of results, they receive an information experience. It works as a web application and translates seamlessly to mobile devices and tablets, which some people make a distinction between. The Qwikis are embeddable anywhere on the web and compatible with all iOS devices.

How is a Qwiki created?

The technology behind the “result,” which should really be called a presentation, was built in-house; basically, Qwiki’s team of developers coded algorithms to crawl the web for unstructured information, which the algorithms then auto-structure and pull together as Qwikis. The algorithms register data like photos, video and text, then format it automatically. The algorithms even format certain text like population and age into infographics.

In their very early, private alpha, there were 2 million Qwikis available, created from the 2 million most-searched terms on the web. Today, there are over 3 million, and Qwiki continues to add more information every day.

So what does the future of information consumption look like?

Looks awesome right? Qwiki has been equally awesome enough to give TNW readers 500 alpha invites to search for your own Qwikis!

Qwiki was founded in October 2009 by Doug Imbruce and Louis Monier. Monier, who Imbruce describes as “the father of Internet search,” was the founder of AltaVista, one of the original web search engines and previously worked at eBay and Google.

Meanwhile Imbruce, a fellow Connecticut native, was a computer programmer turned TV producer who developed an MTV Style video show of tours of college campuses, while a student at Columbia. Seeing how 17 and 18-year-olds responded to visual tours of colleges inspired Imbruce to rethink how we process information. This theme was one of the original seeds for Qwiki. Fast forward to spring 2009 and Imbruce is dashing to the airport to catch a flight to Buenos Aires, performing last minute web searches on his phone to find out more about the city. “Why isn’t there one place I can go that will just tell me a story of the most important and pertinent information about this city?” He asked himself.

By fall of the same year, production at Qwiki was in full swing and Imbruce moved his team out to Silicon Valley. “Silicon Valley’s access to engineering talent is unrivaled,” says Imbruce, who has discovered “the experience of process” in a very different way on the West Coast. After a year working on Qwiki, literally on their one year anniversary, Qwiki wins TechCrunch disrupt in September 2010, taking home $50,000 and piles of street cred.

Last Friday, Qwiki threw a launch party at Backstage, a new event space in Manhattan’s Lower East Side. Upon arrival in the big apple, Imbruce tweeted, “Qwiki is like NYC – smart, sexy, layered and flamboyant. I miss this town!” That made me smile so I asked him what he missed about living in the city. “The energy in NYC makes it the greatest place on Earth,” he replied.

The Future of Qwiki?

By mid-December, along with a public alpha launch, expect an iPad app, followed by apps for both iPhone and Android and lastly for interactive television. “We want people to see the consistency of the Qwiki experience across all devices. Imbruce says he’s been getting a lot of attention from corporate dev departments. “Right now our real struggle is that we have so many opportunities, what do we say no to?” In fact, we speculated in October that, “Qwiki will succeed because Microsoft will buy it.” But according to Imbruce, he’s keeping Qwiki on an independent course. “It’s important to stay focused internally. Everyone at our company is aligned for 5, 10 and 15-year goals. We would like to stay on an independent course but we’ll see how things develop.”

Partnerships are already underway. Imbruce says he’s chosen 6 partners, which he will announce in January of 2011. He won’t say who yet but that it’s “All the players you’d suspect from large news organizations to retail companies, particularly luxury brands.” “Qwiki can be a great presentation tool but for a info junkie like me, it falls a bit short,” tweets @fbozo, a TNW reader. But Qwiki isn’t trying to replace Search with a visual answer. It’s better explained as an a method of augmented search for individuals who prefer to experience information in a visual format. Like we’ve stated above, Qwiki is a platform, ripe for third parties such as other developers and entrepreneurs to integrate with and build on. “Our company will succeed by allowing third parties to put their content into a Qwiki format,” Imbruce says. Imagine using Qwiki to get a local restaurant listing. It would literally be a visual feast if it could pull from sources like Foodspotting, Yelp and Menupages. And a visual presentation is just easier than squinting and trying to read text.

“Curation is becoming a key part of the Internet experience and Qwiki presents short, interactive curated information. The majority of my media consumption happens in Twitter. I subscribe to thought leaders in my industry, friends and colleagues but I dont spend time searching the web anymore. While social media consumption is overtaking my days, I think it’s reasonable. There’s just so much data for human beings to process that we rely on our social networks to help us filter it.” – Doug Imbruce

Pulling in social networks will be another huge step for Qwiki. Imbruce brought up Zuckerberg’s recent interview, in which the CEO states that he believes in a future disrupted by “the social experience.” Expect a Qwiki that scans your social media services, friend recommendations and email and presents it in a rich format as a curated entry point to the Qwiki search experience. For the future of media, Imbruce believes that by 2015, 90% of IP traffic is going to be video. This reality will reinvent the publishing industry leading to even more video production, because as Imbruce says wistfully, “the world of content creators are responding to the world of content consumers.”

Qwiki is going to be crucial for students and the education system. “The richer the data, the higher the recall rates,” says Imbruce. After showing a Qwiki to my brother, a psych student at Boston University, he said, “It’s the perfect form of learning. It’s like you’re sitting through a lecture but I can see it visually and I’m hearing it and I’m reading it. Most professors just lecture and you sit there and eventually drown out. This is visually stimulating and aesthetically pleasing.”

Individuals and small business users will also be able to build personal Qwiki profiles. So yes, one day soon you will be able to Qwiki yourself, (I giggle). It will be an internal app that you can choose to use tol publicize your data; think of your About.Me profile, but on steroids.

As a fun side project, Qwiki released an alarm clock application, which merges weather and your calendar info into a one minute preview of your day. It’s a concept for what Qwiki could one day become. Check it out here.

On the process of learning and how we experience information and maybe where we can go from here, I leave you with Confucius.