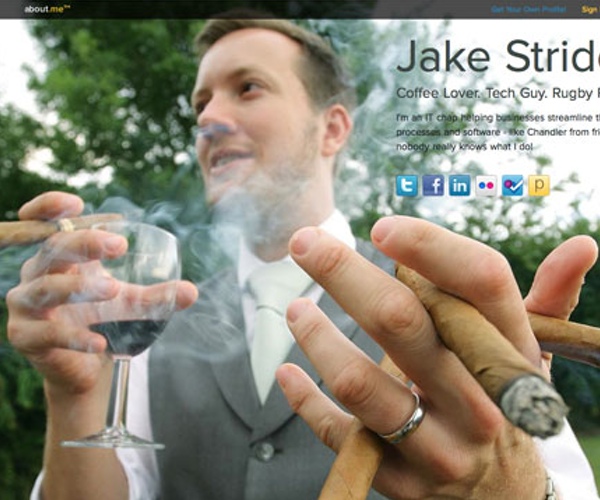 Just like Gmail replaced Hotmail and Facebook replaced MySpace, often times the second to the stage has the most talent. With an attitude that says, “I am your new virtual business card,” About.me is a service like Flavors.me but with more functionality, smarter options and it’s all free (for now).

About.me focuses on personal branding and analytics, rather than just creating a simple online identity. With a free About.me account you can see how many people see your profile, where they’re coming from (your Twitter bio? your e-mail signature?) and what they are doing on your page.

About.me is FREE. “We don’t believe that people should pay money for a set of front end tools to set up a profile of themselves. We just dont think thats a long term business model nor do we think it’s interesting,” says About.me’s co-founder Tony Conrad.

The URL is better. It’s pretty clear that, particularly for professional cases, About.Me couldn’t be a better URL for its use. For example, let’s say you are making an e-tro. Instead of writing, “This is Courtney, the East Coast Editor of The Next Web who lives in Brooklyn and enjoys reading Russian literature….” You’d just say, “This is Courtney, and here’s her about.me.”

At first About.me limited the number of services you can connect to because “too many confuses users” but due to customer feedback, they’re adding YouTube, Vimeo, Pandora and Formspring soon. In the meantime, users can add any URL they wish to their About.me page.

They are planning to move towards a freemium model. “While we currently have a kickass free version, there’s a whole other class of users out there that will pay money for services that make sense,” says Conrad. For example, they may cater to small companies that need social media behavior analytics. Conrad also believes there’s money to be made in domain name management and providing people with About.me e-mail addresses.

Want a Beta invite? Go to the comments below and follow my instructions. Then please RT this story! :)

Co-founder Tony Conrad says, “Searching for people on Google is like dumpster diving, our site enables you to pull all of that information onto one page and that’s very powerful.”