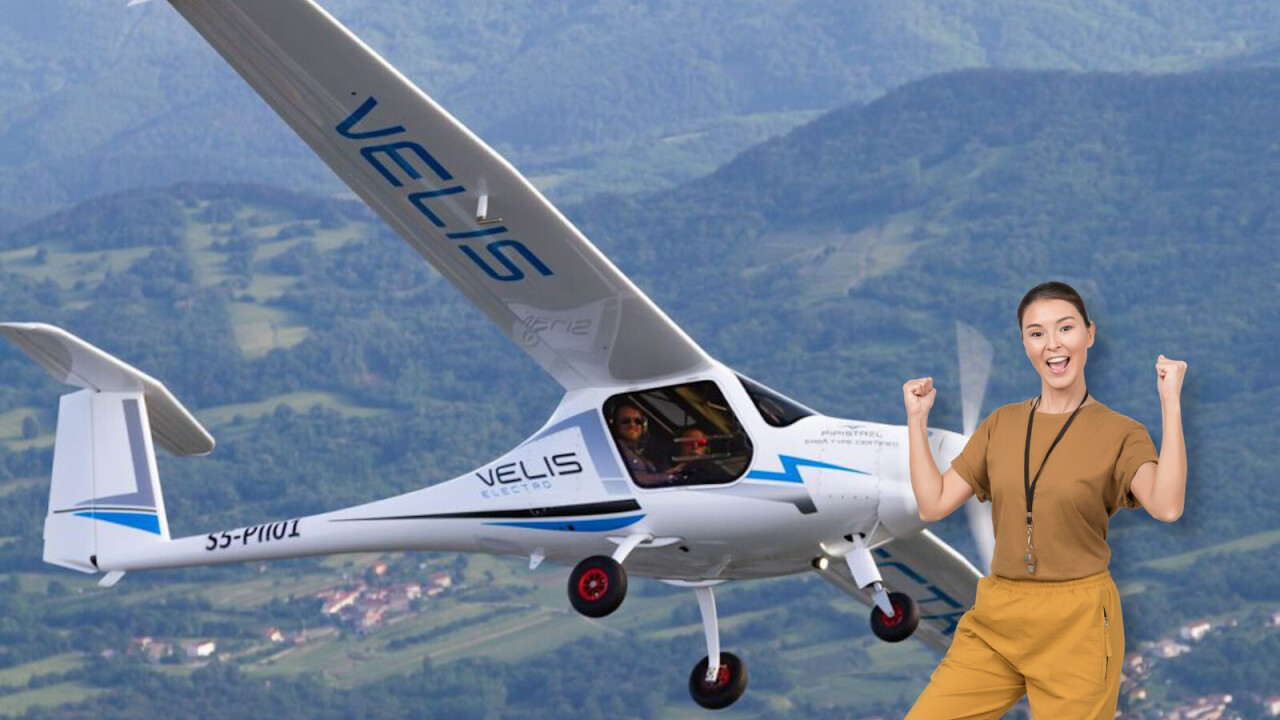 A light aircraft company, that you’ve probably never heard or, has just been given special certification from the European Union Aviation Safety Authority (EASA) for one of its electric winged vehicles.

So what does that actually mean?

[Read: Tesla Model S can finally drive 400 miles between charges — but only in North America]

EASA Type Certificates are, in very simple terms, awarded after an aircraft has successfully satisfied industry engineering and safety criteria for a specific type of aircraft — which no electric plane of this type has achieved before.

In other words, as Pipistrel founder, Ivo Boscarol, put it: “The type certification of the Pipistrel Velis Electro is the first step towards the commercial use of electric aircraft, which is needed to make emission-free aviation feasible.”

Back in May, Pipistrel received certification for its water-cooled 57.6 kW electric engine and powertrain, the latest certification applies to the aircraft as a whole unit. Meaning the aircraft can now start looking to go into service.

Specific safety criteria include things like making sure the plane had adequate power redundancy to ensure safe landings if a battery pack should fail.

The Velis Electron is a small plane, though. It’s a two-seat, with a maximum takeoff weight of 600 kg. It’s capable of flying for around just 50 minutes, at 90 knotts, which is about 100 mph (in reality that will vary with wind speed, though).

What’s more, the Velis’ engines are available to OEM manufacturers, so other upstart electric plane makers can use them to get their ideas off the ground, ahem. Seriously though, it’s probably much easier to use an already certified engine rather than going through the process of certification again.

It should be noted that the Velis Electron is only going to be used for training pilots. Its interior is designed to be similar to more conventional planes to help pilots familiarize themselves with the controls — so we’re not going to be seeing these flying all over Europe in a commercial sense. Pipistrel expects to deliver the first vehicles to customers later this year.

But the milestone of a fully EASA certified electric plane shouldn’t be overlooked. Dominique Roland,  Head of the General Aviation Department at EASA said:

For EASA, the type certification of this aircraft marks a significant dual milestone: on May 18, 2020 we Type Certified its engine as the first electric engine – now we have followed up with the first Type Certification of a plane flying that engine. This was a truly ground-breaking project which has yielded many learnings for the future certification of electric engines and aircraft, undoubtedly a growth area in coming years in line with the aims of environmental protection.

Indeed, while it might be a fairly niche type of plane, getting EASA certification is no easy task, and it took Pipistrel three years of work and collaboration for the agency. But the learnings from this process can now be applied again, and by other manufacturers, to speed up the introduction of electric planes.

Electric planes present a unique challenge. Batteries are heavy, and as they lose charge they represent nothing more than dead weight. But some, such as Norway, are committing to the tech in a big way. Earlier this year, a Norwegian airline operator stated its intent to convert all domestic short-haul flights to electric power by 2040.