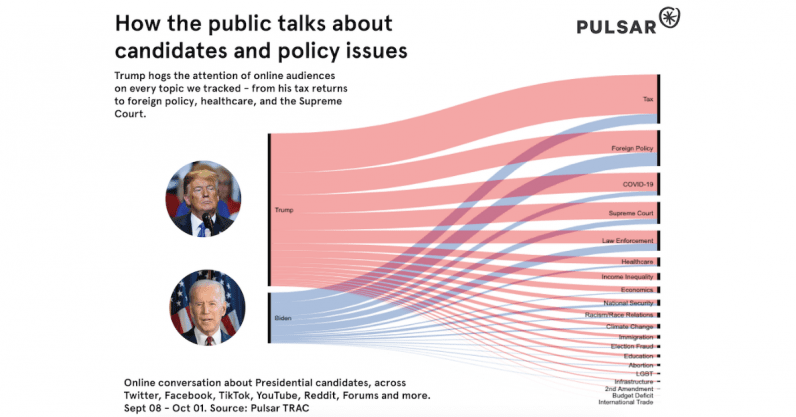 In an election year that seems to be filled with more drama, public health crises, protests, natural disasters, scandals, and gaffes than ever before, everyone is on the edge of their seats to find out who will become the next US president.

But with a first presidential debate that was so difficult to watch, even Pence’s fly didn’t want any part of it/had better things to do, it was hard to pinpoint any … ehummm clear policy stances.

That’s why we decided to take a closer look at which issues the public, the media, and the candidates themselves are talking about most.

To do this, we teamed up with audience intelligence platform, Pulsar. Using their social listening technology, they pulled data on the top issues being discussed from Sept. 8th – Oct. 1st in relation to the presidential candidates across different platforms including Twitter, Facebook, TikTok, YouTube, Reddit, forums, and more.

Here’s what we learned:

Of course, as we all know, Twitter has been Trump’s weapon of choice for many years now, even before he became president. He’s taken to his account to voice his opinions on everything from dating advice for Robert Pattinson to his speculations on Obama’s place of birth.

And the same goes for his stance on policy issues. Interestingly, what we can see from the data is that Trump really uses his social media to drive the focus on a small group of key issues, namely foreign policy, crime, and Covid-19.

Meanwhile topics such as climate change, LGBT, and racism were either not mentioned at all, or just lightly touched upon.

We can see that Biden’s strategy contrasts significantly. Although the candidate’s top focus during this period was on healthcare, unlike Trump, he spread his posts more evenly across the different issue areas. Also, unlike his rival, Biden addressed more progressive topics like climate change and LGBT rights on his social accounts. At the same time, voter fraud and the second amendment didn’t receive coverage.

This sharp contrast in strategy is perhaps revealing of the different audiences both candidates have supporting them.

As a recent poll by Pew Research Center found, while political support for Biden has increased and even surpassed Trump in the last months, only a little over half are strong supporters. This could be a reason why Biden has chosen to avoid strongly favoring certain issue areas over others.

Meanwhile Trump, who has a larger base of strong supporters, focuses on driving the key issues his base cares about.

But is this a good strategy? The beginning of November will tell, but by continuing to pander to his base, Trump doesn’t seem to be winning over those who are still on the fence about supporting him.

Still, overall Trump took the spotlight, attracting well over twice Biden’s total attention across social conversations and news media. He was also more effective at driving conversations about his opponent. According to the Pulsar team, many of the most popular posts about Biden actually came from Trump’s own accounts.

While Trump may be more skilled at attracting and steering conversations on social media, is all the attention he’s getting positive?

Trump trumped by his own tax returns

While Trump may be hogging the spotlight, the New York Times dropped a bomb on the conversation with its investigative report into the President’s tax returns. This was the biggest conversation driver in relation to Trump across social and news media during the period observed.

In fact, the story managed to eclipse Trump’s efforts to steer public conversation about himself, with foreign policy and Covid-19 coming in second and third place.

Fun fact: In 2016, Trump paid Stormy Daniels more than 173x what he paid the federal government in income taxes.

While this also pushed the conversation about Biden and taxes forward, the majority of it was in relation to Trump’s tax returns. Just hours before the debate, Biden voluntarily released his own tax returns showing that he paid $288,000 last year compared to Trump’s $750 in 2016 and 2017.

Joe Biden should open up the debate on Tuesday night by reading from his own tax returns. He and Dr. Jill Biden paid $5.2m in taxes in 2017 and 2018, a third of their total income. 1/3 of their income.#TrumpTaxReturns

Overall, the public was more focused on Biden’s foreign policy strategy than his tax returns.

Aside from taxes and Covid-19, the only issue to consistently rank high across social conversation, news media, and the candidates’ own channels was foreign policy.

And what were they talking about most?

“China” appeared in over 6% of all the posts Pulsar analyzed.

Why is this so significant?

As Pulsar saw when analyzing the data, the majority of Trump’s foreign policy discussions centered on China. This makes sense when considering his strategy over the last few months. With Covid-19 and the economy being two of the biggest challenges Trump has faced in the run up to the elections, his rhetoric on standing against China, whether painting a tough-on-trade picture or withdrawing from the WHO, has increased.

Pulsar found the majority of public engagement on policy issues came from Facebook with Pro Biden pages like Ridin’ with Biden and Pro Trump pages like The Hodgetwins being some of the biggest drivers of engagement.

Why did Joe Biden wave to an empty field in Florida? Caption This 🤣 www.officialhodgetwins.com

Posted by The Hodgetwins on Wednesday, September 16, 2020

HE WON'T STOP LYING… Seriously, what is WRONG with him?! 😡 Follow Ridin' With Biden to defeat Trump and save America! 🇺🇸🇺🇸🇺🇸

But one of the top posts during this period was Dwayne Johnson’s endorsement of Biden. (Not sure what the world is coming to when a former wrestler nicknamed ‘the Rock’ is the least aggressive voice in the debate.)

As a political independent and centrist for many years, I’ve voted for Democrats in the past and as well as…

Posted by Dwayne The Rock Johnson on Sunday, September 27, 2020

With crazy new developments happening seemingly every day this year and the last sprint to the election coming up, it’s likely we’ll be seeing more sudden shifts in policy discussions. All we can do now is keep up to date on the conversation, cross our fingers, and vote.