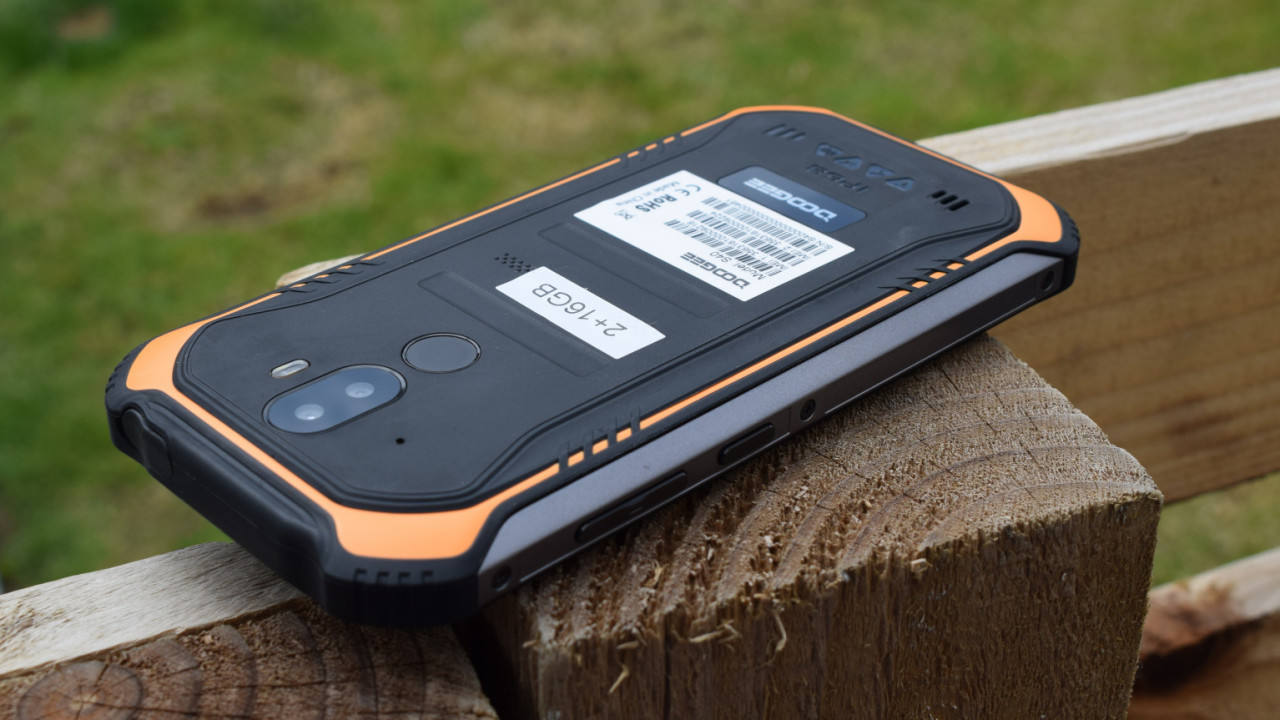 I think the one moment that summed up the overall naffness of the Doogee S40 was when I tried to take some product shots on a bright summer’s day. My brother-in-law was holding the phone with his arm outstretched, the screen showing TNW’s homepage. I stood behind him clutching a Nikon DSLR.

“Mate,” I said. “You need to turn the screen brightness to max. I can’t see anything; just your reflection.”

Using this phone was such a frustrating ordeal. I’m not just talking about day-to-day usage; its utterly crap hardware even conspired to prevent me from finishing this article. But nonetheless, I’m here. Let’s talk about one of the worst phones that ever crossed my desk.

The Doogee S40 is a curious beast. It’s outwardly a rugged phone designed for those working in physically demanding occupations, like mechanics and builders. It comes with a thick external chassis that promises to protect the device from drops and tumbles.

And it also costs £100 (about $125). I can’t understate how unusual that is; even the most barebones rugged handsets from no-name Chinese manufacturers cost several times that amount.

And the thing is, even with the gimmick of it being an ultra-rugged phone, you can tell this is a cheap handset. Everything about it screams “cheap,” from the absolutely horrendous display, to the fact that it wheezes when confronted with day-to-day tasks, a bit like a 60-a-day smoker trying to take on an Ironman triathlon.

There’s something a bit weird about building a phone that’s pants in literally every way, but that’s also really hard to destroy. In that respect, the Doogee S40 is a bit like a cockroach; unwanted and utterly unpleasant, but it’d definitely survive a nuclear fallout.

Specs wise, there’s nothing really to write home about. It comes with the following:

In short, this is an unambiguously low-end setup. The Doogee S40, however, wins points on its battery capacity, which is reassuringly enduring. Also to its credit is the addition of a rear fingerprint scanner, which was responsive and fast (and isn’t even a guaranteed feature on a phone within its price range).

The rest, however? Oh boy.

The problem with reviewing an unrelentingly bad phone is that you don’t really know where to start. Is it the screen, which feels like it was cribbed from a knock-off iPhone 3G? Should I talk about the lacklustre performance, or the terrible camera quality?

Sod it, let’s start with the screen. Any phone with a sub-HD screen is unlikely to win points, but the display on the Doogee S40 is uniquely bad.

It’s among the dimmest displays I’ve ever used, making the phone extremely difficult to view during a sunny day. Color reproduction is similarly dismal, and everything looks washed out. And the low-resolution screen gives everything an unpleasantly grainy texture. Its PPI (pixels-per-inch) of 195 is less than half that of most modern phones.

The thing is, if you get this phone, you’d better get used to that screen; you’ll be staring at it for a long time waiting for applications to load. From Google Chrome, to the Android settings, there’s a noticeable lag with everything you do — even typing. You can blame that on the arthritic MediaTek processor shipped with this phone, as well as the truly paltry amount of RAM included on the device.

You don’t really expect to see a decent camera on a sub-£100 phone, but still, this one was pretty crap. Even in ideal conditions, the dual-camera setup on the Doogee S40 underwhelms, with wildly inaccurate colour reproduction, and grainy shots.

That aside, what the Doogee S40 does well is build quality. It’s unabashedly rugged, and survived several drops onto asphalt completely unscathed.

It comes with a reassuringly rubberized chassis, as well as flaps for the ports. This undoubtedly helped it gain its IP68 rating, which offers a sturdy defense against dust and water. Although, I’ll point out they also make it unbelievably fiddly to change the phone’s SIM card, or plug it in to charge.

This is a phone you couldn’t break, even if you wanted to. And believe me, if you buy it, you’ll want to.

That’s the question I kept asking myself during the process of reviewing this phone.

If you’re looking for an entry-level handset, I wouldn’t recommend this one. There are far better alternatives available for roughly same price, like the Nokia 2.2, which HMD Global recently announced. Pay a little bit more, and you can get the Realme 3 Pro, which is a million times more pleasant to use than the Doogee S40 (keep an eye out for our coverage).

Is the Doogee S40 for those who need a phone who can withstand the indignities of working life? Maybe, but if that’s the case, why would you spend just £100? For a further £200, you can get the Doogee S90, which, on paper, is a far more compelling device. There are also really rugged good handsets from Chinese rival Blackview, too.

I have to give Doogee credit for trying something new with the S40. Although this review is pretty damning, I’ve got a fair bit of affection for the company. The Doogee Mix was a solid and fairly interesting device. I’ve also had good experiences with its other rugged devices.

But under no circumstances could I recommend the Doogee S40 to anyone. Ever.

Unless, of course, you’re a collector of crap phones, or you just hate yourself. If that’s the case, you can pick up a handset on Amazon.co.uk for just £100.