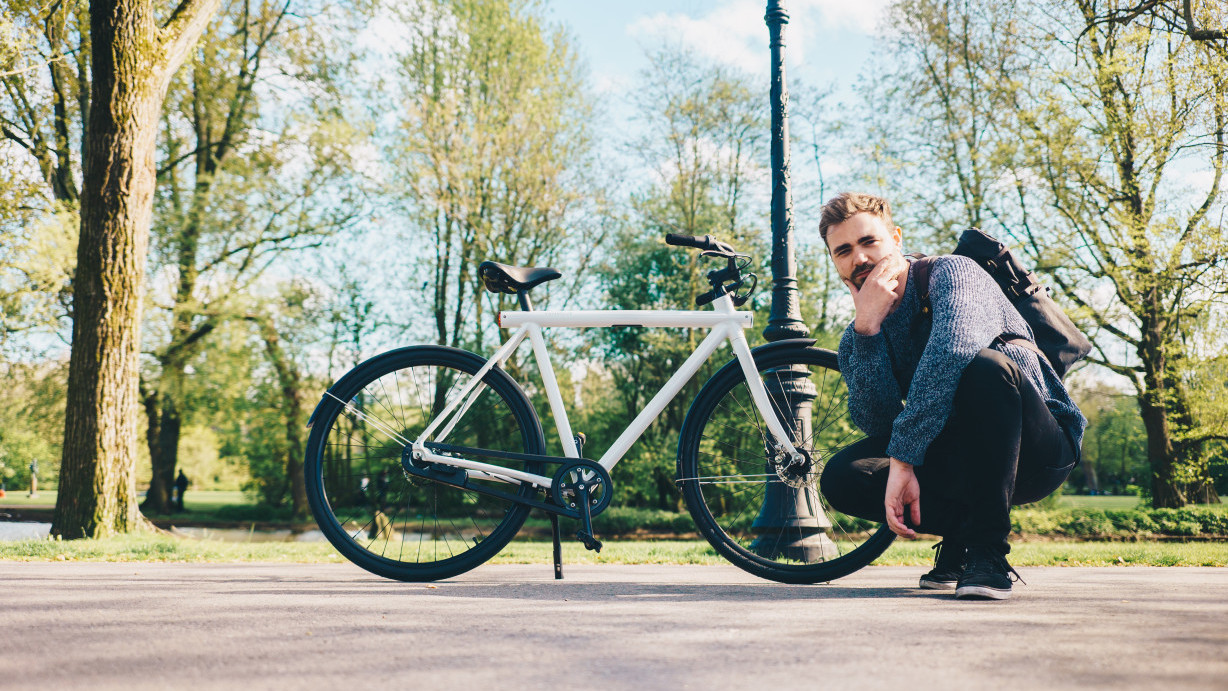 We review a lot of cool stuff at TNW. In fact, it’s one of the best parts about working here — instant access to some of the latest and greatest products, some before they’re even released to the consumer market. As such, we always have our favorites each year, the items that we absolutely do not want to give back. 2018 was no exception.

Each of us had our favorites, a few duds, and that one item (or two) that companies like Polk, iRobot, and Logitech are never getting back.

Since I live with roommates, I’ve not bothered to invest in a good set of PC speakers — I generally keep my headset on out of courtesy. Now I’ve told the people I live with they can lump it, because I love the Logitech G560 too much to keep them quiet.

If you want to see what I thought of the speakers’ sound quality and how they work with games, you can read my full review here. The G560 not only sound great, they look great, with beautiful lighting that illuminates the wall behind my desk in whatever color matches the game on my screen. I’ve not considered myself the kind of gamer who needs RGB lighting stuffed into every neglected crevice of my gaming rig, but the relatively discreet placement of the lights keeps them from being too gaudy. I kind of wish the subwoofer didn’t look quite so much like a sharp-cornered ottoman, especially given how pleasant-looking the speakers themselves are, but I guess there’s only so much you can hope for.

I got the G560 early in the year, and never actually did give them back. They’re sitting on my desk, pumping out soft Christmas music as I write this. If Logitech wants them back now, then something something what Bryan said.

After going on a bit of a robot vacuum kick this year, I got lucky enough to try out iRobot’s Roomba i7+. Past models from iRobot have been excellent, but the field is narrowing with some really good entries by Ecovacs, Shark, and others. That said, the Roomba i7+ is clearly the cream of the crop.

It has the smartest onboard AI of any vacuum we’ve tried to date, it’s amazing at navigating (and cleaning) edges, and it empties itself! Sorry, iRobot, but you’re going to have to pry this from my cold, dead hands.

This might be cheating, since I haven’t finished the review yet, but I promise I will once we’re back from the holiday break.

Since I cheated a little on the last one, I’ll throw in one that I already finished the review for. It’s HyperDrive, perhaps my favorite Mac peripheral, ever.

HyperDrive plugs into the USB-C ports of newer MacBooks, providing multiple ports that would otherwise require adapters. Mine has two USB-A (3.1) ports, two USB-C (which makes up for the two the unit itself needs to plug in to), an HDMI port, Mini Display port, and slots for both SD and MicroSD cards. For anyone that’s been carrying around numerous adapters, you can easily see why forking over $120 for a HyperDrive adapter is well worth the money.

I carry mine with me everywhere, and after almost a year, it’s still holding up well. I’d highly recommend it.

Read more: HyperDrive is a sleek solution to our biggest issue with newer MacBooks

This is the one of the most economical ways to trick out your home with a solid audio system that works with your TV, record player, and mobile devices. The Signa S1 soundbar-subwoofer combo gets plenty loud and sounds great doing it.

The S1 colors your sound a fair bit, so it’s not exactly for audio purists – but it does manage a great amount of detail, clarity, and power, making it perfect for movies and gaming. And thanks to the subwoofer, there’s plenty of headroom for lower frequencies, which means that heavy metal, rock, and ambient records sound gloriously immersive on this system. Oh, and there’s a handy feature to boost the volume specifically for spoken dialogue, so you won’t miss out on the plot when on-screen characters are talking softly.

The S1 was so good, I actually went out and bought one myself shortly after I returned my review unit.

It’s no secret around these parts that I’m a fan of Microsoft’s hardware, but the Surface Go is the closest one to the original dream of being both a good tablet and a full-fledged PC.

Starting at $399 – although I’d recommend most people upgrade to the 8GB, $549 model – it’s affordable enough for most people. The Type Cover is $69 or $99 extra, depending on the color, but it’s easily the best keyboard in the category.

Performance is firmly in the ‘good enough for most people’ camp, it has a USB-C port and headphone jack, the display is great, and battery life is solid. The 10-inch screen size makes it much more useful as a tablet than the Surface Pro, and though it’s technically not as powerful as an iPad, Windows 10 means you can get more real work done.

It’s a truly versatile value, and I already asked Microsoft to let me keep this one longer for ‘testing’ purposes.

Skydio knocked it out of the park with the R1. The “self-flying camera” comes with some lofty marketing behind it — claims of “full autonomy” seldom pan out — but the R1 actually delivers. It’s made me rethink what’s possible with a camera.

The R1 is our family videographer now. Instead of my fiancé and I chasing our kids around with our phones hanging out, eyes plastered to our screens, we’re a part of the action. And, since the R1 can pull off some amazing shots, our family videos look like they were shot by a union-approved film crew.

I don’t really recommend it to drone enthusiasts — it doesn’t even come with a remote, it’s fully autonomous. But, if you’re a filmmaker, athlete, student, parent, or anyone else who has a vested interest in getting Hollywood style camera shots without paying for a film crew: this is your drone.

Read more: Skydio’s R1 is the self-flying camera (drone) we’ve all been waiting for

It’s a great time to be a music producer. I don’t think it’s ever been easier for someone who knows absolutely nothing about production or sampling to pick up a piece of gear and start making music.

Native Instruments is among the vanguard making this possible. The Maschine Mikro is an homage to the days when sampling was considered an art, and the sound of an 808 drum was the soundtrack of an entire generation. But it’s also a forward-thinking gadget that’s as powerful and robust as the software you choose to use it with.

It’s not the ultimate controller, but you’d be hard-pressed to find a better drum machine to pair with a laptop, some headphones, and a backpack. If you’re just getting started, or you’re a nomadic musician you’re going to love the Maschine Mikro.

To be honest, I’ve never really been into bikes. In the UK, a very specific sort of person is into cycling. They wear ridiculous-looking and tight fitting lycra. They never stop talking about custom set wheels, carbon fiber, and carbing up. They think a Strava account is a legitimate replacement for a personality.

But, something changed recently: I moved to the Netherlands. Here, the sort of cycling I mentioned above doesn’t exist like it does in the UK. Maybe it’s because it’s so flat. I can’r say for sure, I’m not a cyclologist (I refuse to believe this isn’t a thing).

What the Netherlands has is a different sort of bike culture. A type I can actually get behind: people use them as quick and easy transportation. Commuting? On your bike. Shopping? Hop on those two wheels. Drinking? Slam your rear on that seat and pedal to your heart’s content.

It’s great. But a knock-on effect has been me actually thinking about bikes a bit more. And… actually… liking them. What have I become?

Lucky, I guess. Throughout the course of this year I was fortunate enough to review two bikes by a Dutch company called VanMoof. The bikes? The Smart series and the Electrified S2.

Riding each one of them was an absolute joy and I still have sweet, sweaty dreams about their gorgeous frames. Unfortunately, I had to give the bikes back. But soon. Soon I’m going to review one and ride off into the sunset like a cowboy at the end of a John Ford movie and you’ll never hear from me again.

I’m coming for you, VanMoof.

After a tedious, months-long search, I’ve finally found a portable vaporizer that I don’t mind bringing anywhere – the Pax 3.

I had been using another vaporizer – the Arizer Solo 2 – for quite some time, and although it is frankly a pretty good device, it’s not exactly pocketable. Yes, it will fit in your pocket, but it’s bulky and weighty, and that makes it a hassle to carry around.

The Pax 3, on the other hand, will fit in the smallest of pockets. But here’s the kicker: it does pretty much everything the Arizer Solo 2 (and other bigger vapes) can do, but in a much smaller body.

Of course, a compact body also means less battery. While the Pax 3 doesn’t last as much as the bigger vapes I’ve had a chance to play with, its 3,500mAh battery comfortably allows for four to six vaping sessions (and often more) on a single charge. And if worse comes to worst, it’s got a tiny charger you can bring along.

One of my main concerns about the Pax 3 was that it might be hassle to control the device via its dedicated app. However, the company has done an excellent job into programming the core features into gestures – so I hardly ever had to resort to the app. Still, if you’re very precise about the temperatures at which you like to vape, you might have to use the app here and there.

After reluctantly putting it off for years, I can finally say that I’m a legit vape convert – and I attribute this smooth transition to the Pax 3.

Read more: The Pax 3 is a slick, stylish weed vape for blazing beginners