Native Instruments is legendary for its synth sounds and production software. But, the Berlin-based company has also built a reputation for excellence with its hardware controllers, and the Maschine Mikro Mk3 is no exception.

For the purposes of this review, I’ll be discussing the Mikro in the context of building beats. Keep in mind though, it’s equally adept at any kind of music – it’s even a great device for filmmakers who want to score their own movies but don’t know how to play all the instruments in an orchestra.

And, as far as drum machines go, there’s the Akai MPC60 – a device that deserves to be inducted into the Hip Hop Hall of Fame – and there’s everything that came after it. Native Instruments’ Maschine Mikro falls into the latter category, obviously, but it does so with an apparent respect for the gear that came before it.

Akai’s MPC60 was created in response to increasingly cluttered studios that relied on multiple pieces of gear with dozens of knobs, switches, and sliders to shape sounds. Producers didn’t want furniture-sized gear anymore – especially those who primarily wanted to work with samples. So the MPC got rid of all the extraneous stuff and focused on a layout that worked for beat makers.

Fast-forward to present-day music gear, and we’re seeing the bloat return. Even Native Instruments’ own gear was starting to become a bit “bell and whistle-y” for everyone but the power users. But the new Mikro model seems to pay homage to the spirit of Akai’s MPC by reducing clutter and eschewing unnecessary doo-dads (for the most part anyway).

This thing is gorgeous when the lights are on. But, when the power’s off, it’s just a hunk of black plastic with a bunch of square white buttons on it. And, oddly, I kind of like that about it. 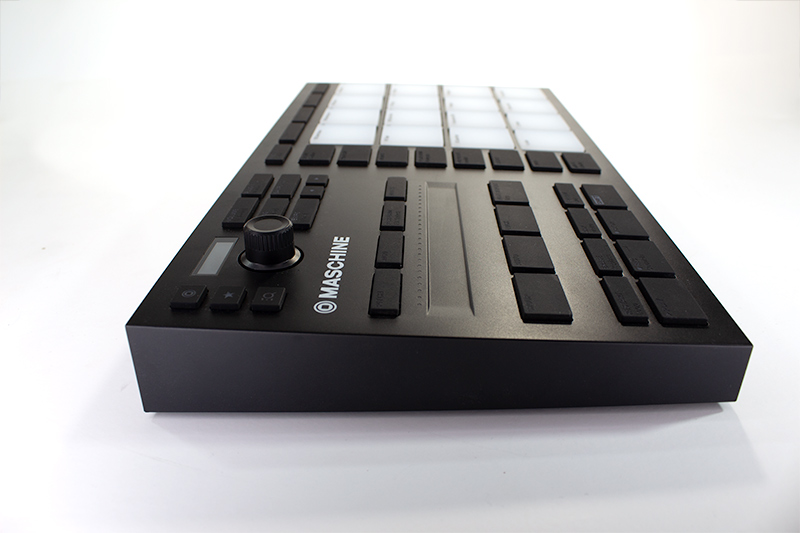 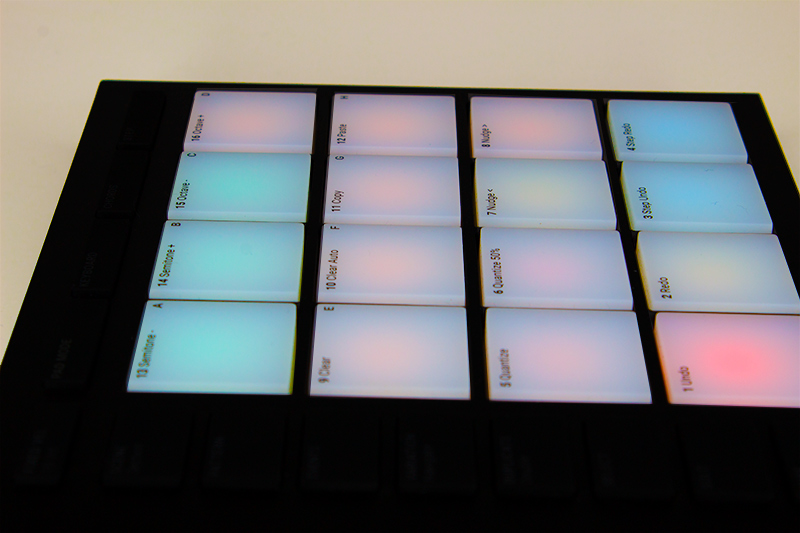 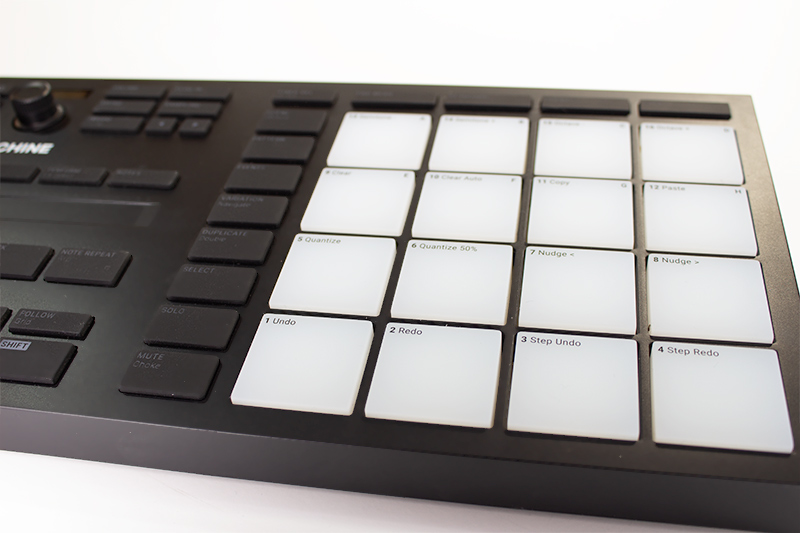 Maybe it’s because I know Native Instruments is a Germany-based company, and that makes me think of precision engineering, but it feels like the Mikro is conserving energy when it’s turned off. Not in the sense of saving power, but in the sense of a lion resting while it watches a herd of gazelle trot by, waiting for the moment to unleash its power.

I know that’s a bit hyperbolic, but I’ve watched this thing go through its colorful light-up sequence at least once a day for the past two or three weeks and it brings me joy every time. It wants me to make beats with it.

Let’s talk about some specifications and the user experience:

First off, the Mikro isn’t a standalone beat machine by any means. It doesn’t even come with an AC adapter — you power it via USB from your desktop or laptop. So, if you’re looking for something you can toss in a backpack and use by itself: this isn’t for you. It also doesn’t have a headphone jack or anywhere for you to plug your monitors into.

You’ll need a computer with it, but because it’s USB-powered you can use it anywhere you can take a laptop. And it has an incredibly small footprint, so it’s really not too big of a deal to carry it around.

And, if you’re a producer who doesn’t like the distraction of a screen, the Mikro is actually the device for you.

I know that sounds counter-intuitive considering you have to have it connected to a computer. But, once I got my bearings, it was easy to do most of what I wanted to do using the tiny LED screen on the Mikro. I barely ever glanced up at the laptop screen. And I didn’t miss the big colorful dual screens of the Maschine Mk3 at all.

It took me almost no time to integrate the Mikro into my production workflow because it just connects to your computer. I primarily tested it with the included Maschine 2 software – which I found very clever for beat-making – but it also worked great in my Pro Tools setup.

People who remember the days when adding a new piece of gear meant spending 8-12 hours re-running cable, installing drivers, and reloading your entire VST library will appreciate that the Mikro works with just about any software DAW without any compatibility headaches – at least, in my experience.

When I built a new workflow around the Mikro, it was even easier work with. It’s a device that falls into a nice groove for beginners and pros alike because it forces you to learn hardware and software – but it lets you pick how much of either you’ll use.

I was able to create entire beats in just a few minutes without so much as touching my mouse, but I was also able to repeat the process without touching the Mikro (at that point you’re better off just buying the sound packs and loading them into a software synth though). Ideally, you’ll find your perfect medium somewhere in-between.

It’s nice to scroll through sounds using the Mikro’s only knob – you’ve got the pads right there so you can tap out sounds quickly to determine if you’ve found the perfect snare, for example. But when it came to sound-shaping (changing the reverb, tuning and detuning, etc.) I found it much easier to use my mouse in the software, because the Mikro sacrifices having numerous knobs in exchange for its small footprint. 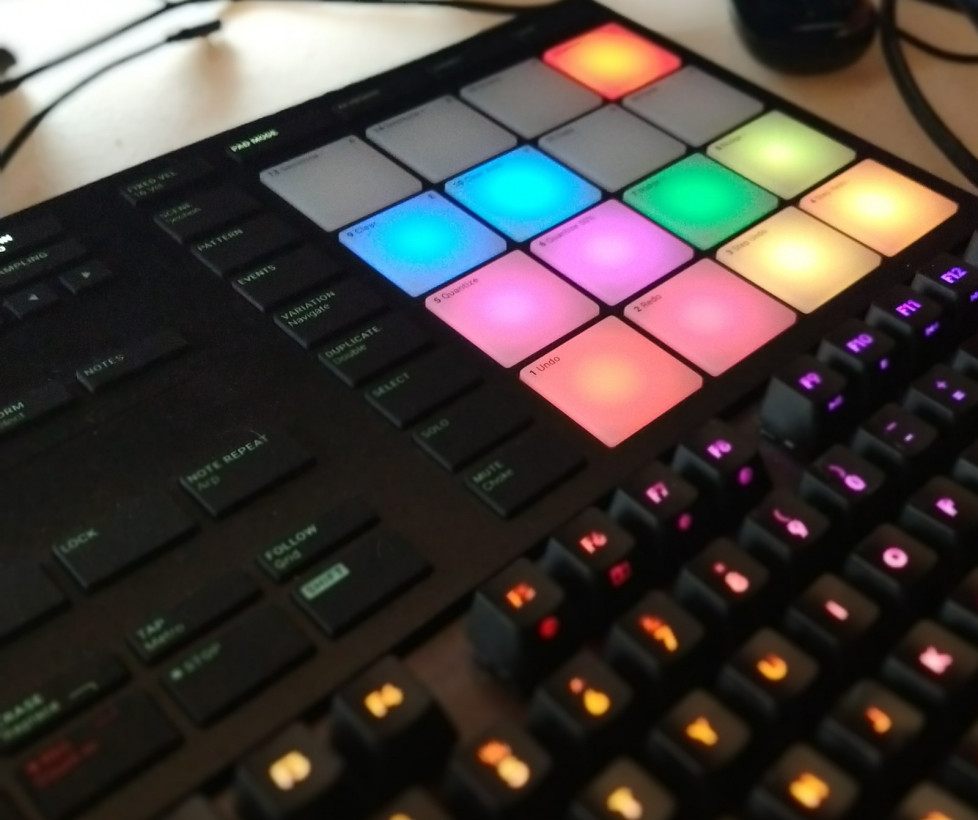 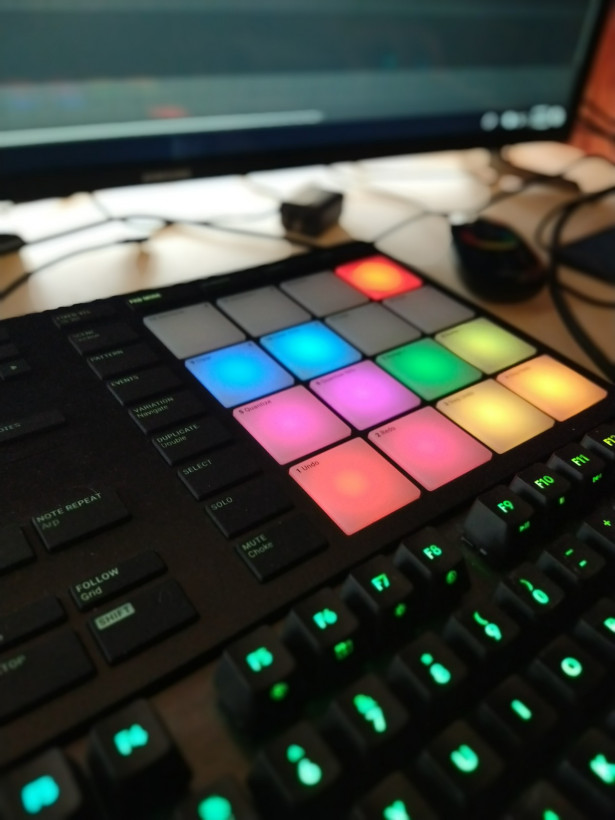 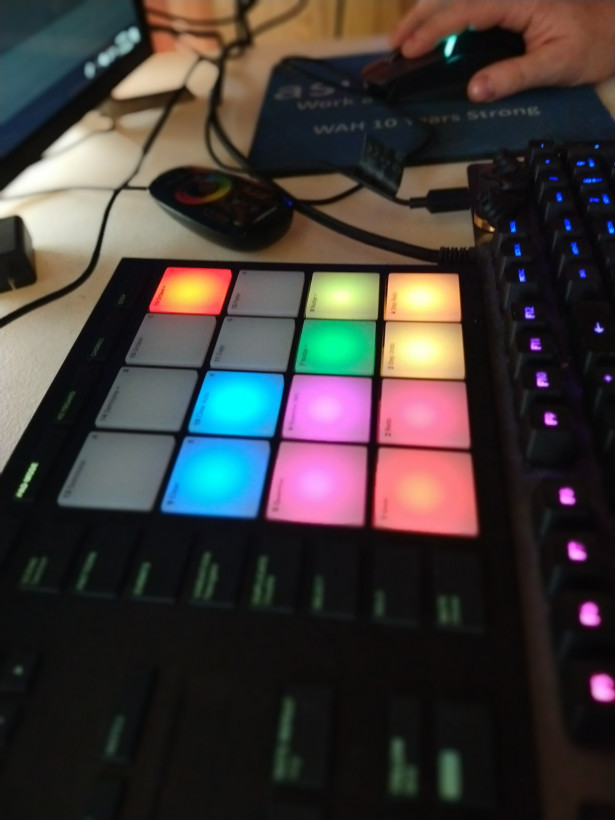 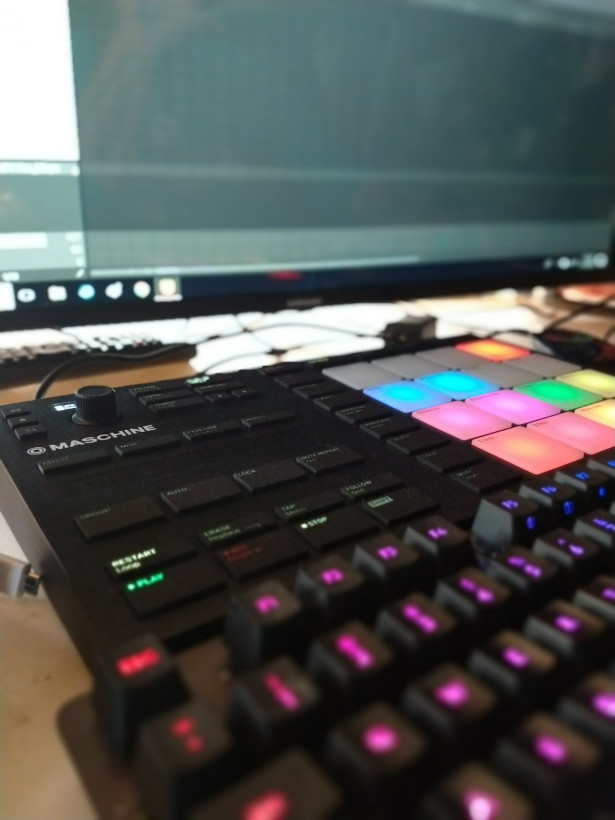 Also, it combines with your other gear perfectly. In fact, my current favorite production workflow includes both the Maschine Mikro and the Komplete Kontrol controllers. I feel a bit spoiled by the seamless integration that allows me to tap out the drums with one hand while playing a simple bass line or testing melody notes with the other. Another handy feature was the ability to keep separate sounds loaded to each pad, but also load any individual pad’s instrument to the keyboard where I can use the keys to find the specific pitch I want.

We’ll have a complete review of Native Instruments’ Komplete Kontrol A25 soon, and more info on including both controllers in your workflow then.

If there’s one place the Mikro absolutely shines though, it’s in the pads. The 4X4 grid of over-sized tap pads look beautiful when they light up, and provide the perfect tactile percussion experience. There’s no wobble or sponginess but they still feel equally good tapping drums or mashing organ sounds out.

Honestly, if you’re willing to learn Native Instruments’ take on music production hardware, the Mikro is worth it for the brilliantly done pads. Unless you prefer squishy pads, in which case you’ll want to shop around.

Other things I liked about the Mikro, compared to other beat machines in the price range, were the fantastic touch strip and understated black buttons. With the touch strip I was able to load up a wah-wah guitar sound and bend the notes by hand to make it sound much more realistic. And I love how the text on the black buttons lights up to make it easy to read in any lighting situation, plus everything is spelled out so you don’t have to spend two weeks remembering acronyms or shortcuts.

Tiny details like that make your music unique and your experience top-notch. And they’re easier than ever to access because you don’t need a college education in music theory to bring them out with this device. It’s amazing how much the learning curve has come down for audio production in just the past decade.

I think Native Instruments has pulled off a practically magical Maschine with the Mikro. It makes me feel smarter than I am by making it easier to produce unique music with this piece of gear than anything I’ve used before it. But at that same time there’s still a few buttons and features I simply haven’t had the time to try – it can do stuff I’m not skilled enough yet to understand. Such is the life of an amateur producer.

That’s what’s great about the Mikro: you can throw away the instruction manual and try to figure it out on your own if you want to. It’s not rocket science. Even total novices will be able to make some noise with the Mikro Mk3.

But, if you invest your time in the Native Instruments’ audio production world, it’ll pay off in your ability to get the most out of the gear. Because, like any musical instrument, you’ll get better at using it the more you practice with it.

Native Instruments hasn’t reinvented the drum machine here, but you’re almost certainly going to hear the Maschine Mikro in some of your favorite songs next year if you’re into hip hop, electronica, or pop.

The Maschine Mikro Mk3 is the kind of hardware that inspires entire careers. It’s ease-of-use gives beginners the confidence to try out advanced features and empowers experts to distill the production experience down to its roots.