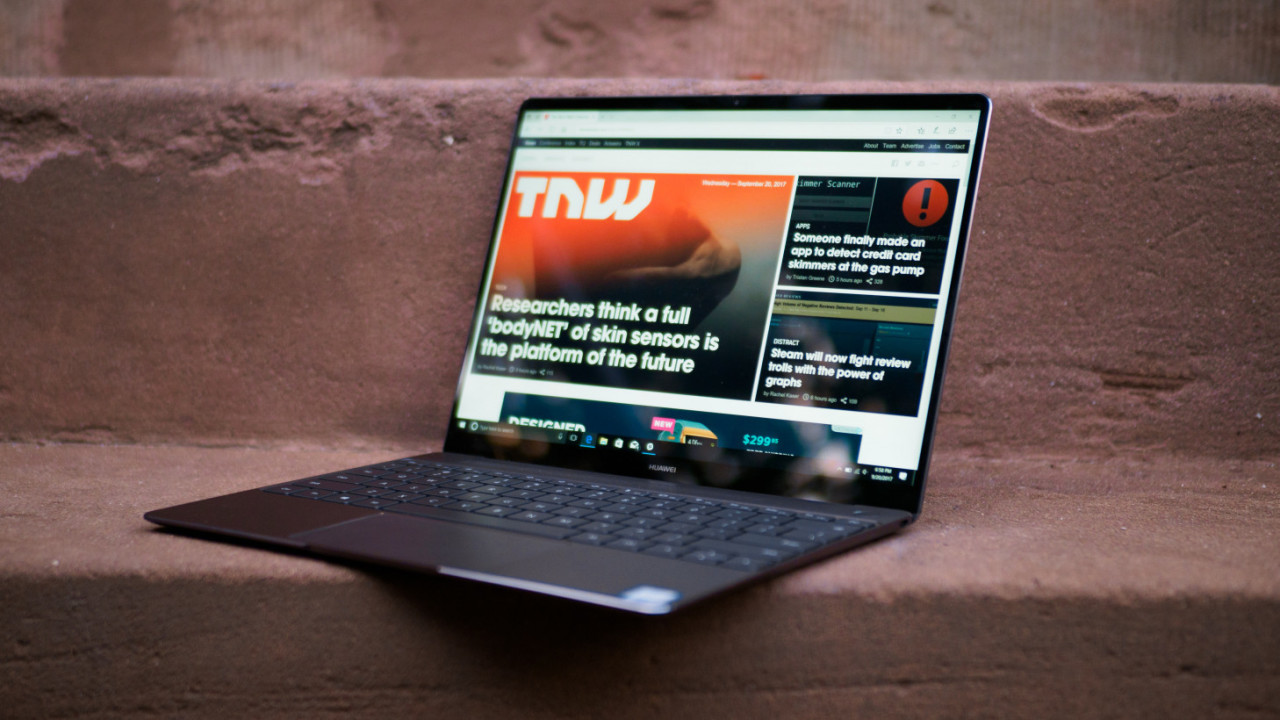 Windows may have just gotten its best answer to the MacBook yet, and it hails from a relative newcomer. Huawei’s MateBook X is not just an impressive first attempt at a laptop by Huawei, it might just be one of the best traditional laptops you can buy right now. I’ve used the device for nearly two months, and my experience has been painless – and that’s all your really want from a laptop anyway.

Though Huawei has struggled to break into the US market, the company just passed Apple in worldwide sales. It’s made a name through design chops and build quality, and that quality shows with the MateBook X.

First things first – yes, it looks and feels like a MacBook. But other than Huawei’s staid logo, I actually like it a bit more. The unit I tested came in a sleek dark blue aluminum (Disclaimer: I’m a sucker for blue gadgets), and the design is both technically impressive and remarkably tasteful, especially considering it’s Huawei’s first laptop.

It’s super thin, for one, at just 12.5mm thick, and weighs a tiny 1.05kg (2.32 lb). The metal chassis has virtually no flex, and they keyboard and trackpad are both excellent. The keyboard has noticeably more travel than any of Apple’s recent laptops, and is all around one of the better keyboards I’ve tried this year. The most clever touch is the fingerprint reader integrated into the power button. It’s by far my favorite implementation of Windows Hello, and everyone should copy it. So long as your hands aren’t grubby, it’s much more reliable than the infrared cameras seen on Surface devices, and it saves you a step compared to devices with separate fingerprint readers.

The highlight of the design, however, is the display. It’s gorgeous, and it’s huge. Huawei managed to fit a 13 inch screen into the form factor of an 11 or 12-inch laptop thanks to tiny bezels that are arguably better than Dell’s InfinityEdge. That’s because, unlike Dell, Huawei managed to fit a webcam above the display – bless the tech gods – even if it takes a couple more millimeters to do so.

It also happens to be a very good screen, reaching about 350 nits of brightness, displaying accurate color (100% sRGB), and handling reflections better than many. I was glad to see Huawei opted to use a 3:2 screen (2160×1440), a taller aspect ratio that is more pleasant for reading and content creation, while still filling about as much horizontal space as possible for video. It’s not touch sensitive, but hey at least your screen will stay clean a little longer.

It would be easy to assume a device this small would have tinny speakers – because most do – but again, the MateBook impressed with some of the best speakers I’ve heard in a laptop of any size. They feature Dolby Atmos tuning, and manage to pack both a discernible stereo image and a refreshingly decent low end. They also fire upwards, meaning they won’t be affected by the surface you place the laptop like so many other ultraportables.

My main pet peeves with the hardware is the USB-C implementation. Having two ports is great, but you can only charge laptop out of one of them, while you can only stream video through the other. On the other hand, Huawei includes a full-fledged USB-C dock (well, technically, a dongle) in the box, including a USB-A, HDMI, and VGA Port, as well as a USB-C passthrough.

Performance on the i5 Kaby Lake model I tested was smooth throughout. Unlike the company’s extensive Android skins, it’s done virtually nothing to stock Windows 10, aside from a couple of utility apps. I didn’t experience any hiccups running my typical workload of apps, including web browsing with a myriad of tabs and doing a bit of Photoshop and Lightroom work. 4K video streamed without any dropped frames. Gaming, as you’d imagine, is best reserved for very low settings and/or older titles.

That said, there’s no word on whether Huawei is planning on updating the laptop to the new Kaby Lake R processors (Intel’s 8th gen chips), which offer four cores instead of two for better multi-threaded performance. We’ve contacted Huawei for more information and will update this review if we hear back, but regular Kaby Lake should serve most people just fine.

On a device this size, battery life is generally the Achilles heel. On the MateBook, it’s decidedly ‘decent,’ regularly netting me about 5 hours of real use. Not up to snuff compared to devices like the XPS 13 or Surface Laptop, but my thirst for longevity is a bit different since the advent of USB-C.

The MateBook comes with a charger that’s only slightly larger than your average adapter for a smartphone, able to deliver quick charge speeds on any device I tested it on (the Nintendo Switch too). I usually carry a phone charger in my laptop bag anyway; the MateBook’s small charger means I need just one for both my phone and laptop. Moreover, USB-C also means I just need a decent portable battery to extend battery life on the go – again, something I’m probably already carrying in my bag.

The MateBook X certainly isn’t a perfect laptop, but it gets a whole lot more right than it gets wrong. More importantly, the price is right. The Core i5 model with 8GB of RAM and 256GB of storage costs $1,099. An identically spec’d MacBook would cost you $1,400. You’d get better battery life on the MacBook, but the MateBook’s screen and audio are arguably more impressive. Also, the MateBook comes in blue, which makes it a default win over Apple.

On the Windows side, a similar configuration on a Surface Laptop would cost $1,300 for a chassis that weighs more and is larger, although the Surface Laptop comes with a touchscreen and also better battery life. Dell’s XPS 13 can be configured similarly for $1,099 and again, has better battery life, but the FullHD screen and audio are noticeably worse, and I much prefer the MateBook’s 3:2 aspect ratio.

Of course, street prices vary, but on the whole it’s hard to find its combination of specs, build quality, display, and sound at that price – not to mention the included dock. If you can live without a touchscreen or potentially having to carry around a charger – a tiny one that can charge your phone too – it’s one of the easiest Windows laptops to recommend right now.

We like some products. We hate others. Either way, if you buy something through our affiliate links, we get a small cut of the revenue. This isn’t a sponsored post, but for the sake of transparency, you deserve to know what’s up.