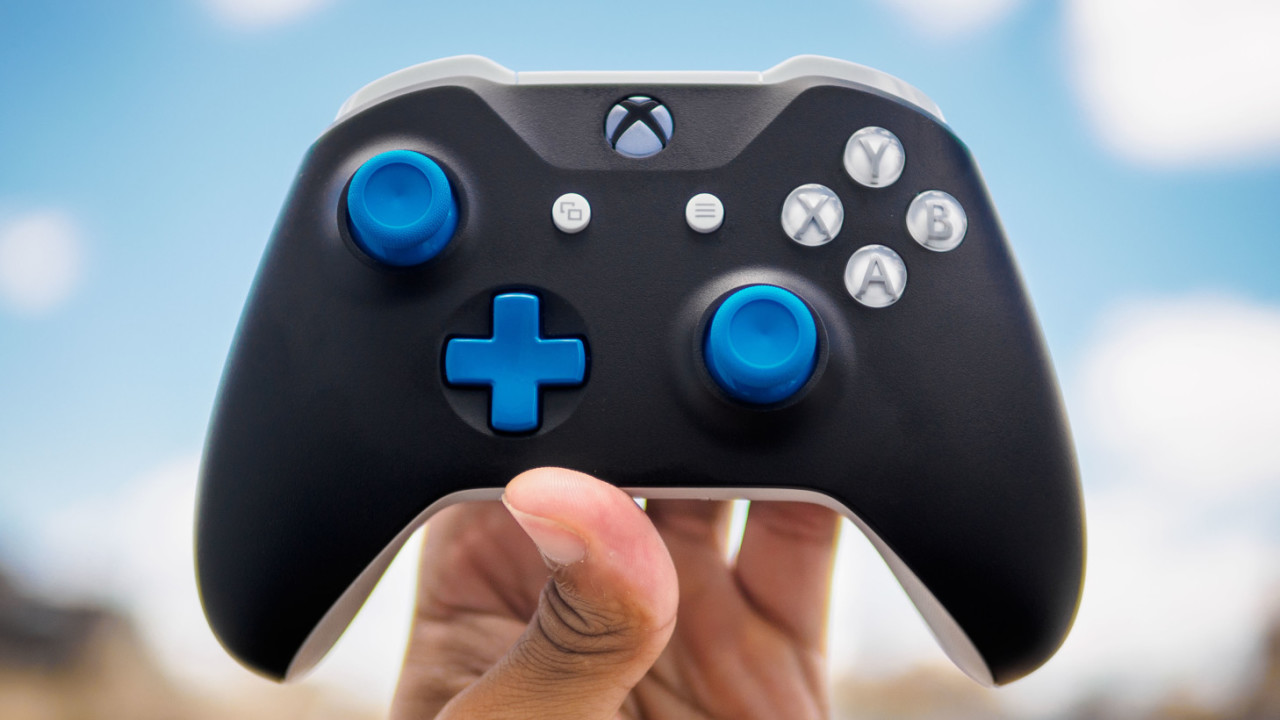 The Xbox Ones S may have been Microsoft’s biggest E3 announcement, but for many the coolest bit was that new Bluetooth controller – especially the ones with a custom design.

Here’s the basic recap of the advantages of the new one compared to the original Xbox One controller:

Of course, Microsoft’s  pro-level Elite controller includes many of those advantages, and one ups them with replaceable thumbsticks and D-Pad configurations, hair trigger locks, and back paddles. But that costs $150, somehow doesn’t include Bluetooth, and most importantly, doesn’t come in cool colors.

The controller’s standard white costs $60 -the same as the original, although that has a lower street price – but you can design your own for $80 over at the Xbox Design Lab. From there, you can choose from a number of community presets, or create your own from scratch.


I went for a classy blue, white, and black. You have the option to adjust colors for the body, bumpers and triggers, D-Pad, Thumbsticks, buttons, and the back.

Microsoft makes you choose from a preset color palette, so it’s pretty hard to make a controller that looks flat-out ugly. Here’s a pretty tutti-frutti arrangement though:

You also have the option of etching a message or label onto the bottom of the controller, but the font and placement striked me as odd, so I skipped out on it. Plus, it’s an extra $10 on an already expensive controller, but I guess it’s nice if you’re giving someone a gift.

Once you actually receive it, the controller is packed in a minimal box with a cool holographic etching.

Open it up, and the controller is neatly displayed front and center (sorry, there’s not actually an Elite controller hidden in the package). The package includes one pair of batteries and a barebones instruction manual.

Here’s a clearer shot against the Elite controller:

They’re basically the same size, but the Elite controller feels noticeably heavier and sturdier (one would hope so, at $150).

The new thumbsticks are supposed to “significantly reduce wear” versus the original over its lifetime.  You can also customize their sensitivity via the Xbox Accessories app.

I don’t have an original Xbox controller on me, so I couldn’t compare the accuracy differences, but they feel grippier than I recall from the originals.

The added grip in the handles is much easier to notice.

They’re not rubberized, but there’s a subtle texture that helped the controllers remain secure in my sweaty hands while gaming on a hot summer’s day.

Like the Elite controller, you get a headphone jack this time around – thank goodness. Unfortunately, there are still no rechargeable batteries included by default – just your standard issue AAs.

The Bluetooth connection set-up is basically identical to syncing the controller with your Xbox: press the sync button atop the controller and start a Bluetooth pairing process on your computer.

I played with it an hour or two, and compered it to a wired connection without noticing a difference in responsiveness. The connection remained solid from about as far back as I could get in my tiny NYC living room, and it’s a huge relief not having to find my Micro USB cable every time I want to switch from playing on the Xbox to my PC.

There’s one big caveat though: the controller only works on the Xbox and controllers running the Windows 10 Anniversary Update. I figured that might just be a marketing thing, but I tried connecting it to several mobile devices, and no cigar. If you’re on Windows 7 or 8, you’re also out of luck.

I assume that’s because it has to switch between the proprietary Xbox wireless protocol and Bluetooth, but it’s still disappointing. All the more so because it’s such a nice controller, and I’d love to be able to play on Android with it.

That qualm aside, is it worth your 80 bucks?

Well, that depends. Are you thinking of buying a new Xbox controller, and want to use it on your PC? Then sure, I’d say the $20 surcharge over the generic white controller is worth it for a custom design very few people will share. The original Xbox One controller can be bought for ~$45, but I would imagine that most people reading this review don’t actually need a new controller, given the Xbox One has been out for nearly three years.

This is a purchase of vanity and convenience. In my case, I can honestly see myself using the One S controller more than the Elite. It’s good enough for me (I mean, I’m not a pro) and I’m a sucker for custom colors.

Plus, the Xbox One controller is my favorite PC controller, and I use it often, so the convenience of Bluetooth is welcome. That, and it’s something I’m likely going to use a lot more when Microsoft rolls out its Xbox Play Anywhere program, which lets you play certain PC games on Xbox and vice-versa.

Just don’t expect it to make you a better gamer or something. If the Elite controller couldn’t do that, this certainly won’t.

If you want to try the One S controller, you can pre-order one before the August 2 release. You can design a custom one now too via Xbox Design Lab, but the wait list will hold you back until September.