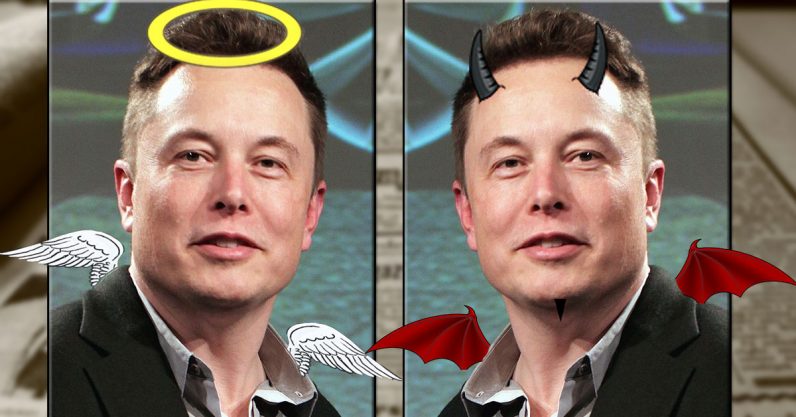 Elon Musk‘s Twitter presence has become a meditation on good and evil. On one hand he’s benevolent and accessible — anyone can chat the Tesla CEO up and he’s often willing to offer his aid and influence to help others. But on the other hand he’s a vindictive bully who singles out individuals and publicly berates them with no regard for the consequences of his actions — something others have been banned for.

He’s one of the most quixotic people of our time. In today’s headlines he’s being lauded for mobilizing a team of engineers to aid in the rescue of a boys soccer team trapped in a cave in Thailand while simultaneously being denigrated for harassing a journalist on Twitter. He deserves praise for the former. A Thai Navy Seal lost his life trying to help the trapped children, and the longer the situation persists the higher the likelihood more lives could be lost.

Musk is in a unique position to help, not only is he a bonafide genius and a world-class engineer, but he also owns The Boring Company and Tesla. His teams will be well-versed in the unique challenges involved in working underground, and they’ll likely bring technology superior to anything currently on the scene.

And if it weren’t for Twitter, perhaps none of it would have happened. A person tweeting from an unverified account asked Musk to help and received a placid response at first:

I suspect that the Thai govt has this under control, but I’m happy to help if there is a way to do so

But, it was apparent that Musk spent a significant amount of time considering the prospects, and it wasn’t long before news broke all over that he was sending a crack team to help.

Boring Co has advanced ground penetrating radar & is pretty good at digging holes. Don’t know if pump rate is limited by electric power or pumps are too smal. If so, could dropship fully charged Powerpacks and pumps.

Ladies and gentlemen, that’s Elon Musk. Anyone who follows tech knows that he’s a problem solver who likely wouldn’t back down from any engineering challenge. I’d go so far as to opine that Musk isn’t the slightest bit interested in the positive publicity associated with helping the trapped kids, but instead he genuinely wants to help because he’s a decent person.

He’s also an asshole who abuses the power and privilege that come with having billions of dollars and tens of millions of social media followers, many of which can be frenzied into a mob to attack his detractors. He took some time on Thursday to engage in a focused effort to publicly attack and discredit a journalist – part of his recent crusade against the mainstream media in the wake of negative Tesla coverage.

For this targeted harassment of a single journalist, who did nothing other than have the audacity of publishing a story that was negative about Tesla, he should be kicked off of the platform just like Milo Yiannopoulis was.

In response to her coverage, Musk accused her of paying sources and insider trading:

Sounds very sketchy if true. @lopezlinette, is it possible you’re serving as an inside trading source for one of Tesla’s biggest short-sellers? An ex-Tesla employee just went on record formally claiming you bribed him & he sent you valuable Tesla IP in exchange. Is this true?

Both claims are ridiculous, and Felix Salmon does a great job of debunking them in his article on Slate, but the fact of the matter is that many of Musk‘s followers don’t care whether Lopez did anything wrong or not.

Musk, rather than send his grievances to Business Insider – its US editor in chief offered to have a dialogue with him, as did the global editor – decided to unleash his vitriol in a public castigation of Lopez. And a mob comprised of his most zealous followers followed suit.

.@businessinsider does not compensate its sources. It did not do so here and we stand by @lopezlinette’s reporting on Tesla. Our invitation for Elon Musk or anyone from his team to further discuss what has been reported and the state of Tesla stands. https://t.co/SFLKikNhYQ

I’d just like to point out that right now, right this very moment, @elonmusk is going through my Facebook history and screen grabbing things to share with his friends on the internet… if you’re investing in Tesla or in a Tesla you need to sit with that. $TSLA

I didn’t ask anyone and the people who sent the snapshots don’t work for me. They just don’t like hypocrites.

And, before any of Musk’s supporters take umbrage to being lumped into a group referred to as a ‘mob’ by a card-carrying member of the mainstream media, allow me to be perfectly clear: most of Elon’s fans are probably decent people. But, enough of them are assholes that he should absolutely know what’s going to happen when he goes after someone publicly. After all, it’s happened before.

Elon Musk knows that the status that comes with his position, and the power that comes with his money and celebrity status, are weapons. For all the heroism he displays as a paragon of technology who, apparently, wants to make the world a better place, he’s little more than a bully on Twitter.

Sadly, we need all the heroes we can get, even if they’re borderline villains like Musk. Because, even though his abuse of power reminds us of certain politicians at the top, Musk, unlike them, is actually doing something to help those poor kids in Thailand. The White House remains silent on the subject.

Read next: Microsoft fans are signing a petition to save the Surface Phone